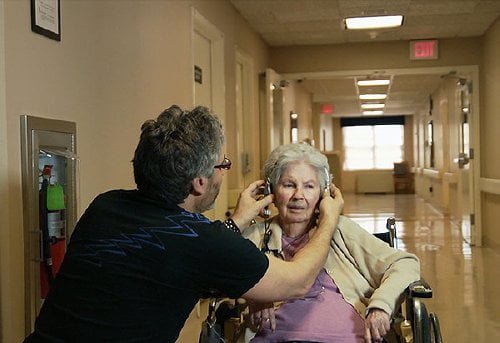 Dan Cohen is the founder of an organization called Music & Memory that brings music to Alzheimer patients ending their days in nursing homes. Why is this music so important? To Cohen and others in the field of dementia care, music is one hopeful link for these patients to stir those memories that bring joy. First time documentary filmmaker Michael Rossato-Bennett followed Cohen and those he helps for three years to show that we are all “Alive Inside.”

Social worker Dan Cohen had been struggling trying to brighten the lives of nursing home patients with the power of music when he asked Michael Rossato-Bennett to film him for one day. Rossato-Bennett was amazed to witness Henry, a dementia sufferer who had been sitting with his head down for ten years come alive when given an iPod with music chosen especially for him. The clip, posted on Cohen's non-profit Music & Memory website, went viral, a tool for Rossato-Bennett to fund the documentary "Alive Inside." This winner of the 2014 Sundance Film Festival audience award obviously has a hugely worthy subject, so it is all the more infuriating that every time we're about to be transported with the power of his message, Rossato-Bennett yanks us back to earth with another haranguing lecture. Every person locked within their own confusion who receives the gift of music reacts with such obvious joy, reaching back to memories they thought they'd lost, that Cohen's cause is bolstered. But instead of providing an informative coda about how to help, the director sullies his own message, going off on tangents, ranting about the evils of Big Pharma, repetitively scolding those he should be convincing. Here is a filmmaker who needs to learn that one can catch more flies with honey than vinegar. It's a beautiful thing that music can help African rape victims heal, but they don't really fit into the model here. And while the problem of geriatric over medication is an important one that makes no financial sense in comparison with Cohen's methods, we don't need to hear about it over and over and over again. More on point is an explanation as to just how music affects us as human beings, utilizing several parts of the brain designed for other purposes, ingraining itself more deeply than other sensory stimuli. Did you know while all humans automatically try to keep time to musical beats, chimps do not? 'Don't Worry, Be Happy's' Bobby McFerrin gets a laugh performing 'the Pentatonic Rock,' in which audience members finish the musical pattern he begins. We see an elderly woman who's told the filmmaker she remembers little to tell him turn into a chatterbox after a dose of notes, recalling her history with dates right down to the day. Norman successfully cares for his wife Nell, an Alzheimer's patient, at home using no drugs, instead stimulating her mind with music. Mary Lou bops about to the Beach Boys and the Beatles. We return to Henry as Rossato-Bennett focuses on the faces of young people watching his video and their faces light up, a connection across generations for a man who sat in solitude for a decade. Oddly, he doesn't comment on this, perhaps the most profound revelation of all.

The first half of “Alive Inside” is inspirational as Dan talks to uncommunicative patients and puts a set of headphones over their ears. When the music plays, we see a distinct change in their behavior. Suddenly, as old familiar music plays they become animate in ways that were not thought possible. Cohen is like an Angel of Mercy as he hands out iPods with specifically designed, per patient, music playlists. “Alive Inside” loses steam, though, when it takes music to different places to bring some joy to those, like abused women in Africa, who have suffered. It is not that it is not interesting subject matter. It is the abrupt change of gears, then changing again, that convolutes the last half of the meaningful documentary, taking it away from Cohen’s wonderful work with bringing the elder back to their families through music. Commentary against Big Pharmaceutical, the corporations that provide of the drugs that keep the dementia patients quiet and docile, is expected. The anti-psychotic drugs they create and use to sedate and control elderly Alzheimer sufferers were never meant to be used on the aged, but they are the biggest customer. There should have been more on the case against the drug corporations versus Dan Cohen and his small group of miracle workers and the positive results they get. One painfully sad statistic that “Alive Inside” brings to the surface is that half of the 1.6 million people living in nursing homes NEVER have a visitor. They are left to be warehoused as patients, but not as people. This, and other unnerving statistics, should open the eyes of the viewer to an issue that will be theirs one day. Aging is inevitable but Michael Rossato-Bennett and Dan Cohen believe that there can be hope and joy in it. I started to put together my own playlist, just in case.