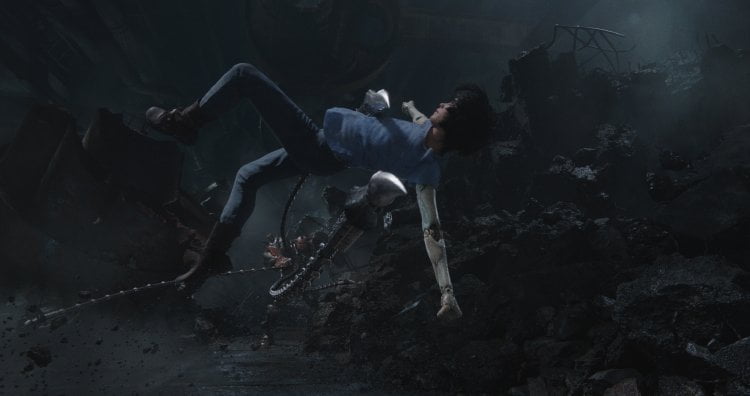 2563, 300 years after ‘the Fall’ which ended technological progress and left Earth’s Iron City a scrapyard in service to the last of the great Sky Cities, Zalem, cyberphysician Dr. Dyson Ido (Christoph Waltz) finds the remains of a cyborg whose human brain still flickers with life. The young woman he names and gifts with a body once intended for his own daughter flourishes under his care, falls in love with street-hustler-with-a-secret Hugo (Keean Johnson) and gradually begins to remember her past as a Panzer Kunst trained warrior while fighting new evils as “Alita: Battle Angel.”

“Titanic” and “Avatar” producers Jon Landau and cowriter (with Laeta Kalogridis) James Cameron present another eye-popping technological sci-fi spectacle based on the Manga graphic novel series by Yukito Kishiro, this time set on a post apocalyptic Earth and helmed by 3D green screen maven Robert Rodriguez (“Sin City,” “Spy Kids). As with “Avatar,” “Alita: Battle Angel” features mind blowing visual effects in service to a been-there, done-that mashup, in this case of “Frankenstein” and “Rollerball,” and also suffers from origin story-itis. This one’s a bit better than the overblown “Avatar,” though, largely due to Rosa Salazar’s (“Bird Box”) engagingly plucky performance, her genuine connection with the charismatic Johnson and some rousingly staged action scenes. Alita is a CGI creation based on motion capture, like Andy Serkis’s Caesar in the “Apes” movies, who looks incredibly realistic except for her huge, anime eyes (she rather resembles Emma Stone). When the young woman awakens in a teenaged girl’s bedroom upstairs from Dr. Ido’s surgery, those eyes go a long ways towards expressing her wonder as she examines her new intricately jointed hands and limbs. She creeps downstairs to the delight of Ido and Nurse Gerhad (Idara Victor) and expresses hunger, her face screwing up when she bites into an unpeeled orange. Ido takes her outside into the sun drenched bustle of Iron City and her enthusiasm is that of a puppy, attracting Ido associate Hugo, a ‘jacker’ of parts from involuntary cyborgs (his secret). It is Hugo who introduces Alita to Motorball, the game that enthralls Iron City, its champions the only ones able to ascend to Zalem. Donning wheels for a street game, she quickly gains the upper hand from aggressive showboat Tanji (Jorge Lendeborg Jr., “Love, Simon”), one of Hugo’s jacking crew. Her latent skills also draw the eye of Ido’s ex Chiren (Jennifer Connelly), another cybersurgeon in the employ of Vector (Mahershala Ali), the man who rules professional Motorball and, therefore, Iron City. Alita’s attention, in turn, is drawn to Ido’s mysterious evening pursuits when she spies him returning in the dead of night rolling a wheeled case during a spate of murders. Following him will introduce Alita to Iron City’s network of hunter-warriors, mostly cyborg mercenaries who track criminals in lieu of formal law enforcement. There is more, of course, including Zalem’s uber being, Nova, who inhabits Vector at will and Alita’s returning memory, spurred in battle and with the recovery of a URM (United Republic of Mars) Berserker body. As is often the case with origin stories, we are given both too much and too little information, though, Iron City’s support of Zalem ill defined, Zalem’s advantages undefined, their history only hinted at. By the time we get past two explosive climaxes, the one thing that we’re sure of is a franchise in the making. This is one cool looking movie, though, director of photography Bill Pope’s native 3D shooting a forgotten pleasure with its smooth, unobtrusive deep focus and production design full of delights like Hugo’s gyrobike and Zapan (Ed Skrein), a cyborg whose handsome human face floats above Aztec inspired armor. Other menacing hunter-warriors include Grewishka (Jackie Earle Haley), a wrecking ball of a cyborg, and Nyssiana (Eiza González), a stunner with scissoring appendages who reconfigures into a human spider. The film’s score is run of the mill, but closing credits roll to Dua Lipa ‘Swan Song.’ Grade: