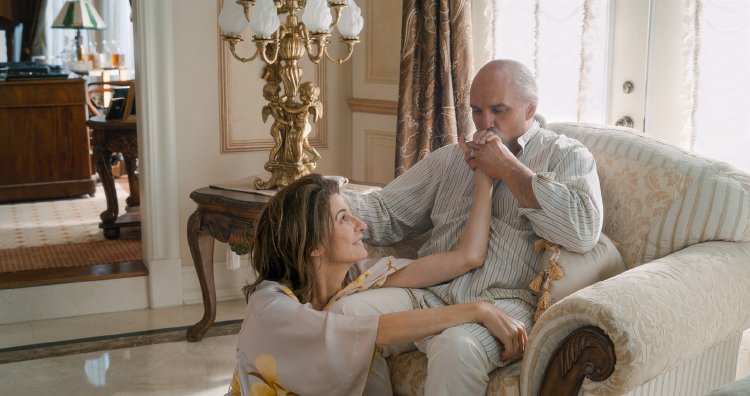 The youngest of Québécois couple Sylvette (Danielle Fichaud) and Anglomard Dieu’s (Roc LaFortune, "I'm Not There") fourteen children was such a late addition, her parents were already grandparents when she arrived.  She quickly emerged as the musical family’s exceptional vocal talent and dreamed of becoming a star like Barbra Streisand.  When her older brother Jean-Bobin (Antoine Vézina) succeeds in getting her an audition with Quebec music producer Guy-Claude Kamar (Sylvain Marcel), her mother corrects his fumble of her daughter’s name.  ‘Not Celine.  Aline.”

What a weird but strangely entertaining film.  Cowriter (with Brigitte Buc)/director/star Valérie Lemercier ("Palais royal!"), a huge Celine Dion fan, slightly fictionalizes the singer’s life and plays her from the age of five to fifty, a confoundingly creepy choice which amps up the film’s comedic aspects (and yes, some of them are intentional).  This French film largely cast with French Canadian actors was nominated for ten Cesar awards and won five, including Best Actress, Production and Costume Design, the latter two presumably largely due to the use of perspective to make Lemercier seem childlike.  The effect is something like a Michel Gondry film gone sideways.

An amusing prologue, which sees Aline’s dad declare not wanting any children before we observe the arrival of one after the other, thirteen times, is followed by Aline’s first public performance at her brother’s wedding.  If seeing Lemercier portray a five year-old doesn’t freak you out, hang on for the rest of her portrayal of Dion as a quirky social misfit and the protégé of Kamar (actually Rene Angeli), the older man the teenaged Dion famously fell in love with.

I knew little about Dion going in, not being a fan of her power ballad style of music, and one of the strangest things about this movie is its music!  Dion did not want to be involved with the film, so her voice is supplied by French singer Victoria Sio.  While Sio knows how to build to a crescendo, it is the choice of other selections on the soundtrack that baffle, like the 50’s era male crooner which *plays over Aline’s audition* and then simply cuts out or Elvis’s ‘Love Me Tender’ for Guy-Claude’s funeral when Aline wrote so many songs about him.  But Lemercier captures the self-deprecating goofiness that is Dion and, in particular, the devotion she had for the man she fought to marry.  Family life, too, is amusingly depicted (at one point grandchildren raise the Dieu family count to 57), Danielle Fichaud a comedic force as Aline’s supportive mother who, initially at least, was a staunch objector to her marriage.  Marcel projects Angeli’s appeal as the image savvy Svengali with an outsized appetite for shish kebabs and schnitzel.

“Aline” is certainly going to divide audiences and I have no idea how Dion fans will react (the film appears to only take some minor liberties with fact), but it certainly isn’t like anything else out there and that alone is a plus.

In late 1960s Quebec, the Dieu family welcomed their latest member, number 14, into the world. By age 12, she proved to have a great singing voice and, when she performs in public for the first, a star is born named “Aline.”

If you pay just a little attention, you might notice that the biography of the fictional character, Aline Dieu, has a passing resemblance with the life and career of pop phenomenon Celine Dion – well, not just passing. There are reasons for that, which I will leave the reader to find out.

Valerie Lemercier writes, directs and stars (but does not sing the many songs) in this quasi-biography about Celine Dion and her life. And, when I say “stars in” I mean in every scene when Aline is on camera. This includes when the youngster makes her stage debut. Putting the face of 57-year old Lemercier, no matter how “de-aged” by CGI, onto the 12-year old body is downright creepy – and I do not mean this in a good way. The filmmaker carries this old-for-young idea way too far into the story, to the point of extreme distraction and queasiness.

Lemercier is wooden when not “performing” on stage and is overshadowed by her supporting cast, especially Aline’s mom, Sylvette (Danielle Fichaud), who steals the show from her famous daughter with every scene she is in.

The shot-for-shot life of Celine Dion is done with a strange exactness that kept me wondering – after I got over the 12-year old version of Lemercier – why the pop star refused her support for the movie. (Could it possibly be because of Lemercier?).

The supporting cast and the well-crafted stage shows, plus competent dubbing by singer Victoria Sio, make “Aline” better than it has a right to be.