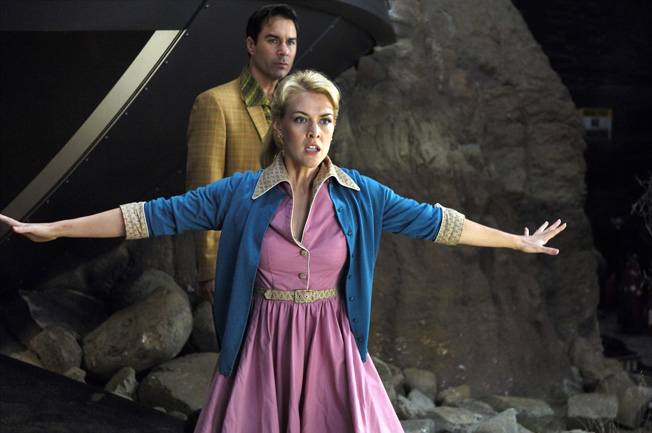 It is the summer of 1957 and it is a beautiful August evening in the sleepy California desert town of Mojave. The annual Perseid meteor shower is at its most spectacular and astronomer Ted Lewis (Eric McCormack) has a very special anniversary dinner planned with his wife, Lana (Jody Thompson). But the night sky reveals something else – a fiery object that crashes into a nearby butte. Ted goes to investigate the crash site but he, and the unsuspecting townsfolk, are not prepared for an “Alien Trespass.”

Astronomer Ted Lewis (Eric McCormack, TV's "Will & Grace") is about to engage in a sexy wedding anniversary celebration with wife Lana (Jody Thompson, TV's "The 4400") when a fiery object lights up the sky over the Mojave Dessert. The phenomenon is also witnessed by local waitress Tammy (Wendy Malick lookalike Jenni Baird, TV's "The 4400") and Lovers Laners' Dick (Andrew Dunbar) and Penny (Sarah Smyth, "The Covenant"). Ted's the first to arrive on scene, though, making him the perfect vessel for Urp, a space traveler with a dangerous stowaway in "Alien Trespass." Working from a screenplay by Steven P. Fisher, "X-Files" director R.W. Goodwin brings a loving sendup of 50's and early 60's sci-fi B movies to the screen in a delightful homage. Like "Monsters vs. Aliens," the filmmakers have cast a feminist slant, but unlike the Dreamworks animation (or 2001's "Lost Skeleton of Cadavra" for that matter), Goodwin and Fisher (as well as story originator James Swift) don't try to spoof the genre - they play it straight - and in so doing, paint a loving picture of a time whose wholesomeness is amusing in today's more cynical world. (Note heroine Tammy's introduction - dressed in Western wear and blonde updo, painting a picture of a horse in a room full of equine tschochkes.) "Alien Trespass" is actually a film within a film. An introductory 'documentary,' which mixes period news film (a 1957 outer space Santa visit!) with 'actor' Merrick (McCormack) debating a studio head for pulling a classic before it can be seen, precedes the magnum opus. Before you can say "I Married a Monster from Outer Space," Lola notices her hubby Ted is acting pretty weird and is suddenly fascinated by their salt shaker. When she calls the police for help, Ted slips out. With a twist of every film featuring a cop one day from retirement, Chief Dawson (Dan Lauria, TV's "The Wonder Years," "The Spirit") is a Korean Vet who has been 'temporarily' filling the slot for years. One day before his real replacement is about to appear, something finally happens in his picket fence town. The Chief promises to keep an eye out for Dr. Lewis and sends local lothario Vernon (Robert Patrick, "Terminator 2: Judgment Day," TV's "The X-Files") and goody two-shoes Stu (Sage Brocklebank, TV's "Psych") to check out the crash site. Vernon barely makes an effort to actually reach the right spot, and when they run into Dick and Penny along with teenage rebel Cody (Aaron Brooks, "Fierce People"), they don't take Dick and Penny's tale of a hideous, disappearing monster seriously. Sent for eggs for the Lucky Diner, Tammy finds Ted walking along the highway. In stiff, inhuman terms, he informs her that he is not Ted but Urp (like one of your Marshalls, heh-heh) and that he must find the Ghota before it begins to divide, after which it will overrun Earth. And yes, we've been treated to the sight of the Ghota along with Dick and Penny. It's a rubbery, veiny phallic mound with one eye and tentacled arms that moves like a person shuffling underneath it when it's not simply vanishing from the shot. When it runs into a human, like poor old drunken, shack-dwelling Wilson (Tom McBeath, TV's "The 4400"), all that gets left behind is the human's H2O, a puddle as it were. By the time the police take things seriously, Vernon's mud and the Ghota's taken refuge in a theater showing "The Blob" to a pretty full house after an altercation with Tammy and some salt at the Lucky. Eric McCormack may be the lead 'name' here, but this is really an ensemble and a well-directed one at that. The actors not only have to play characters, but they have to filter their acting through the style of the genre. McCormack morphs from absent-minded professor to human-vesseled Urp very well, making the most of the physical aspects of being held captive in an alien form (not to mention the 'polarity' he feels around attractive females). Unknown Jenni Baird makes a splash, a 'nice' girl drawn nevertheless to a 'man' she knows is married, and delivers some of the movie's funniest lines ('If I were a Ghota, where would I go?'). Her "The 4400" costar Thompson is the brunette sex bomb to her blonde girl next door - they're not unlike Betty and Veronica, just as Vernon and Stu recall the "Adam-12" team. Perhaps nothing is more lovingly recreated that the glorious technicolor of the time (the film was shot on Super 16), owing as much to production designer Ian D. Thomas's (TV's "The 4400") team as the technicians. Sets are decorated with brilliant primaries and pastels and cars look like a candy shop (blue and red pickups, mint and sky blue convertibles). Even the dessert is dressed with brilliant red and yellow brush. "Alien Trespass" is a real find, a low budget indie oddity that charms by resisting the urge to satirize what it instead pays loving tribute to.

This wonderful homage to the great and kitschy sci-fi films of the 1950s – “The Day the Earth Stood Still,” “It Came from Outer Space,” “I Married a Monster from Outer Space,” “ It Conquered the World” and “The Blob,” to name a few – is a brand spanking new science fiction monster movie that could have been made back in the day. It borrows freely from its sources as it tells its straightforward tale of interstellar travel, alien invasion by a one-eyed monster called the Ghota and an intergalactic marshal named Urp. First-time feature filmmaker R.W. Goodwin begins with a faux movie house newsreel with reports of the day – all done with very amusing tongue-in-check wit – ending with the Hollywood news item that film mogul Goldstone is pulling the plug on production of the in-the-works film, “Alien Trespass.” Then, the fun begins and the titular movie spools. Ted goes to investigate the strange crash and finds a partially buried flying saucer. The spaceship is open and the curious astronomer goes in only to be snatched up and possessed by Marshal Urp (yes, I laughed out loud when he is called that). Urp, it turns out, was transporting the dangerous Ghota when his ship had to make an emergency landing on Earth. In the confusion, the murderous one-eyed monster escapes and begins a reign of terror where all that is left of the victim is a gurgling puddle of ooze. Urp, as the now-possessed Ted, seeks help from Lana to find the Ghota and save the earth – one Ghota, given enough to eat, will divide exponentially until it devours the entire human race – but she thinks his strange behavior means he is ill. Frustrated, Urp sets off across the desert landscape to find the monster. Local diner waitress, Tammy (Jenni Bard), sees Ted walking down the road and she offers him a ride. Ted/Urp tries to enlist Tammy to help him and she, too, thinks he is sick. But, when puddles turn up where there should be people, she soon sees the danger mankind is in. Add to this mix some savvy teens, Dick (Andrew Dunbar), Penny (Sarah Smyth) and Cody (Aaron Brooks), a disbelieving cop (Robert Patrick) and the two-days-from-retirement-and-I-don’t-need-this-sh*t Chief Dawson (Dan Lauria) and we have a honest to goodness 50’s sci-fi B movie. The screenplay, by Steven P. Fisher (from a story by Fisher and James Swift), keeps its pace and grace from start to finish, mimicking its sources but, in doing so, makes the genre its own. “Alien Trespass” is a high-quality replica of the films I used to love, as a kid, to watch on TV on a Saturday afternoon. That is what made me love the entire science fiction movie genre of the 1950s and “Trespass” generates that same feeling. Techs hit the mark spot on with the look and feel of the time. Colors, costume, set and camera work all evoke the exact ambiance of its predecessors. The filmmakers have an obvious love for their work and the source material and it shows.