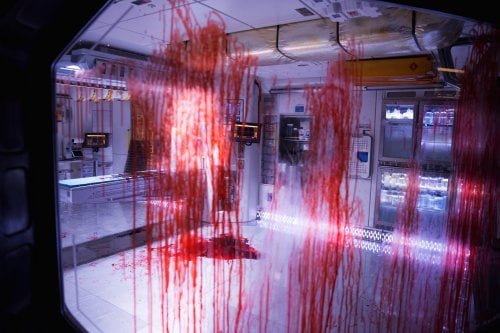 The colony ship Covenant hurtles across the galaxy, heading for the new home of humanity: the planet Origie. Following a tragic accident on board, which killed the captain and 46 others, the crew finds an unknown, but much closer, Earth-like planet that looks perfect to colonize. The decision to change course will have devastating effect on them all in “Alien: Covenant.”

Ten years after the ill-fated Prometheus expedition, a colony ship travels towards Origae-6, its passengers and crew in hibernation pods as Walter (Michael Fassbender), a synthetic, maintains the spaceship with the direction of its computer, Mother. A stellar flare badly damages the Covenant's energy collection sails, buffeting the ship, and Walter awakens the crew to deal with the disaster. Captain Branson (James Franco) is lost when his pod malfunctions, leaving his wife Daniels (Katherine Waterston, "Inherent Vice") grief stricken and the reluctant Oram (Billy Crudup) in charge. When pilot Tennessee (Danny McBride) leaves the ship to repair the sails, his helmet picks up a transmission, recognized as John Denver's 'Take Me Home, Country Roads' back in the bridge. Pinpointed to a previously unknown, much closer, habitable planet, Oram decides to change course in "Alien: Covenant." Director Ridley Scott ("Blade Runner," "The Martian") has said that this is the first of a planned trilogy sequel to "Prometheus" which will eventually link up to his original "Alien." But while "Alien: Covenant" is full of references to procreation (Walter talks to Mother while David refers to Peter Weyland (an uncredited Guy Pearce) as Father, eggs and embryos, the final on-board alien attack) and religion (Oram's faith, the 'Hall of Heads,' the Engineers/Space Jockeys), there is also repetition (mysterious transmissions, course changes, storms, duplicitous machines, botched quarantines, beheadings). At this point, I'm guessing man architected his own predator given the continued bad judgement shown by the trained individuals sent into space. Once again, too, though, Scott has created a beautiful looking film, one of "Prometheus" cinematographer Dariusz Wolski's early shots of Waterston so beautifully lit it's breathtaking. Nothing about the production can be faulted, even if the script by John Logan ("Skyfall") and Dante Harper rehashes prior "Alien" plot lines as it inches forward towards solving its creation mythology. Unable to land due to an atmospheric storm, Tennessee, communications expert Upworth (Callie Hernandez, "La La Land") and her husband (Jussie Smollett, TV's 'Empire') stay on board the Covenant as Oram leads a team piloted by Tennessee's wife Faris (Amy Seimetz, "Upstream Color") to the planet's surface. They are awe struck by its beauty, but there is unease, everything too silent. Oram's biologist wife Karine (Carmen Ejogo, "Selma") goes off to collect samples with a security escort whose smoke break proves fateful. Karine helps him back to the damaged Lander. By the time Oram's group makes it back, the Lander has become a ball of flames and communications with the Covenant all but impossible. When an alien attacks, the group is saved by a cloaked figure who turns out to be the Prometheus's David (Fassbender). Fassbender's dual role is the most intriguing aspect of "Alien: Covenant," Walter's newer design having removed the more human elements of David's. Yet Walter's 'duty' to Daniels, in particular, hints at something more than programming. David has become obsessed with creation, delving into all manner of art but also the constantly mutating alien biology (the original big baddie makes a climactic appearance). Scott's "Alien" franchise still entertains and horrifies, but with two more movies still to arrive, the screenwriters need to find new ways to delve into its mythology. If they believed their final reveal was a twist, they're sadly mistaken. Grade:

This latest installment in the ”Alien” franchise looks great. It immerses us, at first, on board the title space ship on its journey to a new home. Then, the abovementioned tragedy happens and “Alien: Covenant: reveals its true self. It is a monster-in-the-house story that relies on the shallowly drawn characters making bad decisions and doing the wrong things. A case in point regarding the screenplay, by a team of four writers: The Covenant crew is on a many years mission to colonize a discovered planet. We know, the players tell us, that the mission was scrupulously researched and all the preparations were based on this research of the potential new home for mankind. Then, they find a nearby, but previously unknown, planet that “looks good” – never mind there are howling and dangerous storms in the atmosphere that make landing a harrowing event. I think I will stop there as far as description. Now, about the film: while the ensemble cast is huge, there is little or no depth to any of the characters – except for Michal Fassbinder, and he plays an emotionless android (in two roles). This is a problem as I should feel sympathy for the crew and their fight for survival. Instead, I watched, one by one, as the crew is systematically decimated by the monster, like the Ten Little Indians bumped off one or two at a time. Just because a film is made as an expensive extravaganza that looks great, that is not enough to make it a great film. It takes a story where the viewer invests in the characters and roots for their survival. Just look at the story that Dan O’Bannon Ronald Shusett crafted for the original “Alien.” In that film, we got to know, and most important, empathize with the characters, especially Ripley (Sigourney Weaver) and, a little, the Alien. Not so in Ridley Scott’s latest foray into his long-time franchise.