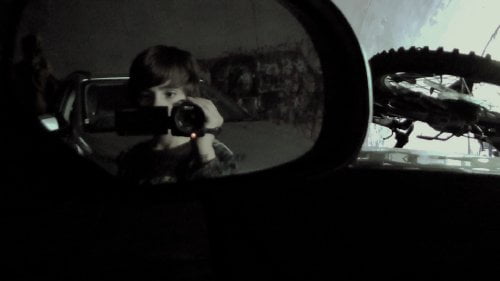 A family is on vacation camping near Brown Mountain in North Carolina. Their youngest son, Riley (Riley Polanski), is autistic and his video camera is always running. While traveling between camp grounds they see something inexplicable – cars scattered down the road with doors open and not a single person in sight. The Morris family will soon find out what happened in “Alien Abduction.”

When the Morris family head off for a multi-site camping trip, the spend their first day building a fire, rock climbing and toasting marshmallows. The three kids, Corey (Corey Eid, 'Raising Hope's' 'young' Burt), Jillian (Jillian Clare, TV's 'Miss Behave') and autistic Riley (Riley Polanski), who can only interact with the world through a camcorder lens, also witness strange lights in the night sky. The next day they find abandoned cars all over a remote road and before they've barely grasped what's going on, dad Peter (Peter Holden, "The Social Network") has been lost to an "Alien Abduction." Producer Matty Beckerman makes his directorial debut with an effective little found footage sci-fi thriller. With his first published screenplay, Robert Lewis treads a familiar path, but the devil's in the details and some well handled subtext on preconceived notions. Cinematographer Luke Geissbuhler ("The Virginity Hit," "Buck") doesn't lean too heavily on jumbled images while attending to the singular POV format, although the filmmakers can't resist some Malick-y cutaways and outside camera edits in later, quieter sequences. After an title graphic that only the most gullible could fall for, Beckerman spends some time with talking head experts to provide some background on his setting, North Carolina's Brown Mountain, the scene of inexplicable lights since the early twentieth century. A bogus Project Blue Book Case dated just a few years ago (these U.S. Air Force UFO studies were abandoned in 1970) reports 27 missing after area UFO sightings. Enter the happy Morris family and their young videographer. After the kids see the mysterious lights (simple but very effective), dad takes a dubious road the next day. Once he admits he's lost, he also must 'fess up that he's almost out of gas. Then a crow smacks into the car and the GPS begins 'recalculating.' The level of hysteria on display here is at odds with circumstances (the road is a two lane paved, gently weaving road described as treacherous), but things start getting creepy once the family reaches an unpassable tunnel through the mountain - at least a dozen cars with doors open, signals flashing and luggage spilling out clog the passage (that's an awful lot of traffic for such a supposedly remote area, but hey...). As Riley looks into a rear view, we spy something in the darkened corner. Then all hell breaks loose. Corey doesn't look back after he sees what's happened to dad, despite his mother Katie's (Katherine Sigismund, "People Like Us") anguish, and the foursome head back for an old mailbox they had spotted alongside the road. They're greeted by a shotgun-bearing redneck who's none too happy when he learns what they've led in. The Morris's regard Sean (Jeff Bowser) as a crazed survivalist whereas he thinks they're ignorant city dwellers and the gradual shifting of perspectives is one of the more interesting aspects of the film. And yet Beckerman and Bowser keep us guessing as to Sean's real intentions, especially as he's awfully familiar with what's going on. Aliens are the standard garden variety humanoid creatures, glimpsed just enough to startle but not cheat. Beckerman mixes in some of the grotesque contortions of exorcism films when we finally witness an actual abduction. A barn serving as shelter is flooded with light through its roof, suggesting a cathedral as a character recites the 'Hail Mary,' further pushing the odd religious inference. Don't turn away when the credits start to roll - the talking heads return to fill in more details and a police surveillance tape provides a whole new ending.

“Found footage” films have been with us since the incredible success of “The Blair Witch Project” in 1999. These films, like the “Paranormal Activity” franchise and “Chronicle,” have been cranked out ever since with mixed success. Alien Abduction” is another entry into the genre but this time it makes more sense. Riley, being autistic, fixates on his video camera and is the quiet chronicler of events as he and his family face the alien invasion. Newcomers, director Matty Beckerman and writer Robert Lewis, take the long time mystery of the Brown Mountain lights and craft a smartly done “found footage” film that focuses mainly on the Morris family, and a redneck they meet by the name of Sean (Jeff Bowser), as they must cope with a frightening unknown. The mysterious lights in the sky have been appearing over Brown Mountain for some 1200 years according to early Native American legends and more modern reports of sightings. What these lights in the sky are has never been explained and there have been many reports of people gone missing in coincidence with their appearance. Beckerman and Lewis take the mystery and use it as the basis for the terror of the Morris family vacation. The cast is made up of actors who harkens from television backgrounds and they give their fledgling director a good account. But, it is the clever and intelligent screenplay that makes “Alien Abduction” work better than others of its kind.