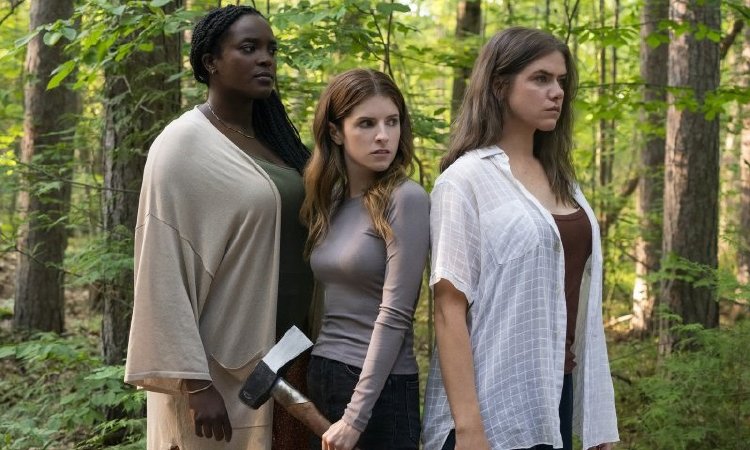 Alice’s (Anna Kendrick) best friends Sophia (Wunmi Mosaku, HBO’s ‘Lovecraft County’) and Tess (Kaniehtiio Horn, “Possessor”) enjoy teasing her when their bartender appears to be smitten, but instead of enjoying the attention, Alice is shocked by the idea of even flirting with the guy when she’s in a committed relationship.  Alice herself is unaware of the emotional paralysis her good looking and successful artist boyfriend Simon (Charlie Carrick) has inflicted, his controlling manipulations inducing anxiety as he coos “Alice, Darling.”

Writer Alanna Francis makes an end run around the usual clichés seen in the abusive partner genre, instead coming at her subject from the inside out, the abused subject’s female friends slowly teasing out the problem even she hasn’t recognized.  But one can’t say the same about the feature directorial debut of Mary Nighy (actor Bill’s daughter), who uses such obvious tropes as birds in flight and surfacing from under water to symbolize freedom.  The writer and director have also staged a climax that stretches credulity to the breaking point, an unnecessary bit of violence (also symbolizing freedom) that relies on coincidence to work at all.  What does work here is the ensemble, Francis creating relationships based on real human behaviors, Nighy realizing them with her direction of her actors.

We can see what’s going on right away with the jumpy lack of confidence Alice displays around Simon, retiring to the bathroom to twist strands of hair right out of her head when she isn’t sending him selfies of her cleavage.  Outwardly, Simon is charming, his control of Alice so subtle an outsider would be unlikely to pick up on it.  When alone, though, he pulls attention like a magnet, Alice’s existence in service to his happiness.  So, when a girls’ week away at a rented lake house is planned for Tess’s 30th birthday, Alice begins practicing her lie about a business trip.

But while she manages to get away, she is so defensive and withdrawn conflict arises among the women, Tess eventually demanding Alice hand over her cell phone (Simon’s been texting constantly).  Tess’s brand of tough love drives a wedge between them while the gentler Sophia tries to dig deeper.  But when Alice suffers a panic attack after losing an earring while swimming, the truth begins to bubble up.  Then a gauntlet is thrown, Simon, having tracked them down, arriving with bags of groceries ostensibly as a friendly gesture.

The filmmakers throw us a red herring when the women arrive in the lakeside town, bulletins about a missing woman and volunteer search parties posted at the local store, but it does serve to set a tone of women in danger.  It will be Alice who first volunteers to search for the missing woman, a means of avoiding her questioning friends, but they eventually join her.  Their dynamic is no cliché, Sophia and Tess initially annoyed by Alice’s behavior before each applies her own, not-quite-right approach to figuring things out, Mosaku soft and maternal, Horn blunt and confrontational.  Kendrick all but makes herself disappear until her friends recognize and describe just what’s been going on.   Carrick, a Michael Fassbender type, is smoothly infuriating until his confidence wavers when his ego is challenged.

“Alice, Darling” addresses an important subject from a unique angle.  There are some bumps along the way and that ending doesn’t quite work, but the cast pulls it over the finish line.