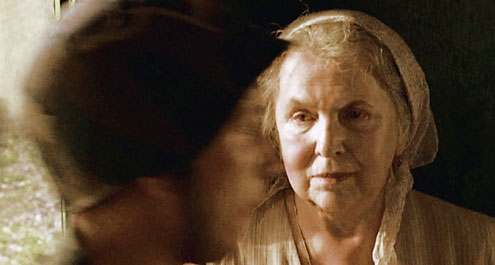 An elderly Russian woman (Galina Vishnevskaya) makes the long journey by train to visit her grandson serving at an army camp in Chechnya. He is thrilled to see her but so are the other soldiers stationed there so far from home. However, her arrival is a spark not just for the soldiers. In her short time there, she forms a lasting bond with several locals, too, in Alexandra.”

Writer-director Alexander Sokurov creates a unique piece of work with a film based in a Russian Army camp in the middle of hostile, civil war torn Chechnya. What makes “Alexandra” unique is its focus on its elder title character amidst the militarism of its setting. Alexandra is a single-minded old lady who will not be deterred in her mission to visit her grandson Denis (VasilyShevtsov). During the long train journey, on a military train, she is looked after by the soldiers returning to the camp. They see her to Denis’s tent door to make sure she arrives safe. Denis returns from a mission, surprised and happy to see his old babushka. He shows her around the camp, helps her climb into an armored personnel carrier and shows her how to handle an AK47. Duty calls, though, and he has to head out, leaving grandma to fend for herself. The young men on base are very solicitous to their captain’s nana and she, when she makes an excursion off base (much to her protectors’ chagrin), promises to bring back cookies and cigarettes for the lads. In town, she meets a shop owner, Malika (Raisa Gichaeva), and the two hit it of like old friends. Alexandra’s kindness wins the hearts of both natives and the occupying troops alike. Although set on an army base, “Alexandra” is a character study that shows the power of one in influencing many. Alexandra’s forceful personality gets her onto army trains, transported atop an APC and through roadblocks manned by armed Russian soldiers. Her stalwart character and unwillingness to be intimidated cause her demands (like going, unescorted, into the nearby Chechnyan town) always met. This is especially true for the young troopers manning the gate to the camp when she returns with the promised goodies for the penniless soldiers. Nothing happens in this whimsical story of a tough old bird that sets her mind to task and will not be dissuaded in her endeavors. Beneath that toughness is a truly loving and caring side that draws others to her like a magnet. Even though there is virtually no action, the story opens up Alexandra to us, the fly on the fall, as we watch her work her strong will. Galina Vishnevskaya is simply terrific as the forceful Alexandra. Those around her ­ Denis, Malika, the soldiers and the town folk ­ are changed, even in a small way, by meeting the three-dimensional old woman and are well played by the mostly amateur cast. Techs are first rate with the army camp as the central set carrying a sepia tone that harkens of heat and dust amidst the olive drab background. The depressed state of the post-Cold War Russian army is skillfully shone and the cinematography, by Alexander Burov, makes the film look hot and dusty. Alexandra” is a film for the thoughtful, discerning filmgoer who is looking for something not made in the Hollywood, USA. I used to be an action film fan but, as the 1980’s and 90’s produced more and more sequels and sequels of sequels in the action genre, I grew to appreciate the sensitive story telling and beautiful imagery of foreign films. Sokurov’s work is a fine addition to world film.