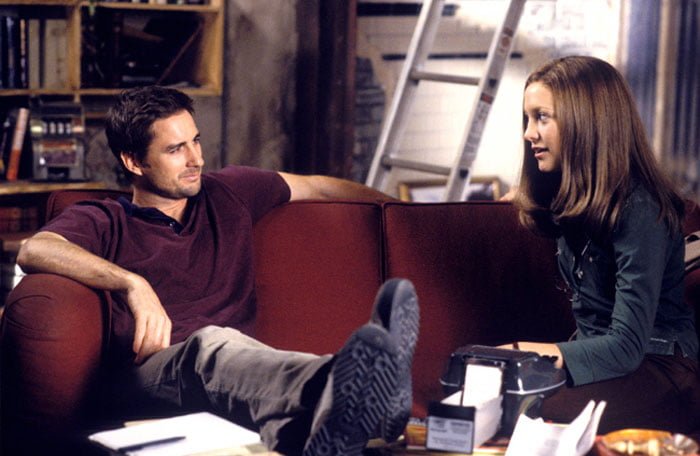 Alex (Luke Wilson, "Legally Blonde") has thirty days to write a novel in order to pay the loan sharks hovering over him and his gambling debt, so he hires a stenographer (Kate Hudson, "Four Feathers") to take dictation. As Emma makes story suggestions, the love story on the page begins to cross over into the reality of "Alex & Emma."

Veteran director Rob Reiner resurfaces for the first time since 1999's "The Story of Us" with a less experienced technical crew and turns in a cliched romance with a distractingly cheesy look. After a shaky start, Wilson and Hudson manage to inject some charm into the proceedings, but "Alex & Emma" is a very slight affair.

After being dangled out of his Back Bay apartment window by Cuban thugs Bobby (Lobo Sebastian, "Ghosts of Mars") and Tony (Chino XL, "The Beat"), Alex must deliver $100K in one month or kiss this planet goodbye. The blocked writer appeals to his publisher, but Wirschafter (Reiner) has little sympathy when he learns Alex's $75K advance has literally gone to the dogs and simply advises the author to get busy. Writers Jeremy Leven, Adam and Andy Scheinman and Reiner (who began this screenplay as an adaptation of Dostoyevsky's "The Gambler" but veered significantly away from the source) introduce Emma in a 'meet cute' that feels false and makes Hudson struggle to appear natural.

Once over that hump, Emma sees to it that Alex begins producing, then begins to challenge his decisions. When he creates a location, the island of St. Charles, but names a real explorer as its discoverer, Emma tells him he's perverting history. His hero, Adam Shipley (Wilson), is a tutor who falls instantly in love with his boss Polina Delacroix (Sophie Marceau, "Braveheart"), but she's indebted to John Shaw (David Paymer, "State and Main") and will need to marry him to retain her lush, Gatsbyesque lifestyle. Adam will need money in order to pursue her and a gambling casino is introduced. A Swedish au pair, Ylva (Hudson), is added to create a triangle, but Alex keeps changing her name and nationality in reaction to working with Emma. After a 'break' for a montage of the couple checking out various Boston landmarks, Emma realizes she's falling for Alex and she begins to ask about Polina's genesis.

While the idea has all the hallmarks of a good romantic comedy, Reiner can't get his movie off the ground. The story Alex dictates is such a simplistic period restyling of his current conundrum that it is unbelievable that it would fetch a $200K fee. Luke Wilson has a loose-limbed, shaggy appeal as Alex/Adam, but Emma is supposed to be made loveable by her insistence on reading the ending of a book first and peeling the skins off tomatoes. Hudson does what she can (with her mother's voice and mannerisms peeking through), but the character is a bit of a lump. Hudson has a field day, however, with the Swedish Ylva, German Elsa and Spanish Eldora before settling into the more practical American Anna in Alex's book. She rises to the comic challenge but the script drags her back down to earth. The rest of the storybook cast play their roles like a backwater theater troupe (even a cameo by Cloris Leachman disappoints). Marceau has a hammy, vampish quality in period, but is simply terrible when she appears in the real world. Reiner's appearances smack of director cameo rather than character.

Adding to the generally numbing experience is the obviousness of a backlot subbing for Boston paired with dreary sets. Cinematographer Gavin Finney provides a washed-out look with occasional focus problems. Edit ting gaffes exist as well. One simply shouldn't be thinking about how cheaply made a Hollywood movie looks throughout its running time, but "Alex & Emma" offers little else to ponder.

In the tradition of John Candy's 1991 comedy, "Delirious", helmer Rob Reiner mixes "real" characters Alex (Luke Wilson) and Emma (Kate Hudson) - a novelist working under a desperate deadline and the stenographer he hopes will help him meet it and, thus, remain among the living - and the fantasy world as the characters in his book come to life on the screen in "Alex & Emma."

There isn't a great deal of depth to "A&E" as we first meet Alex when he naively tries to hide from a pair of tough Cuban loan sharks that he owes a cool $50K. They are about to dump him out a window when he cuts a deal: he'll finish his new book and pay them double what he owes - if they'll give him an additional 30 days. They agree and Alex hurriedly seeks a stenographer to whom he can dictate his work-in-progress. Enter Emma, a pert, pretty, business-like young lady who answered his ad, which says the job is to take dispositions for the law firm of Polk, Taylor, Pierce, Fillmore and Van Buren. (This, believe it or not, is one of the better jokes in the film for those paying attention.)

She initially mistrusts slovenly Alex but she sees something in the guy (talent maybe?) that causes her to drop her guard and agree to take on the proposed task. Things start out a bit rough but the writer soon proves that he can, indeed, write and they get to work. But, Emma disagrees with the paths Alex's story takes, especially about sex, and freely offers him advice on what he needs to do to make his sophomore work appeal to readers like her. (Well, not quite like Emma who has the quirky habit of reading the end of a book to see if she would like to read the whole thing, which drives Alex to distraction.)

Once the quasi-adversarial relationship is set up the story then jumps back and forth between A&E's daily routine and the story as it develops and matures. It's the turn of the 19th century and Adam (also Wilson), a poor tutor (with a gambling problem much like Alex's own), takes a job teaching English to the children of French beauty Polina (Sophie Marceau). He is smitten with the lovely lady right away and has designs on her affections. But, he's broke and another suitor, wealthy John Shaw (David Paymer), is on the brink of proposing marriage to Polina. When the au pair makes her entrance, first as Ylva the Swede, followed by Elsa the German, then as Eldora the Spaniard to, finally, Anna the American, all played by Hudson, the triangle becomes a quad.

This is a light-hearted (and too thinly written) little story that doesn't cover any new ground and depends on its stars to carry the whole of the film. The "Delirious"-style story is not original and requires some level of suspension of disbelief as the inevitable romance unfolds to a stock ending. There is a nice chemistry between Hudson and Wilson and they provide likable performances but are stuck with a script that underutilizes their talent. At times, instead of paying attention to the story, I found myself being distracted by Hudson's uncanny likeness and mannerisms of her mother, Goldie Hawn.

The production is simplistic and seems beneath the previous efforts of Rob Reiner, who has done far better work in the past - "The Princess Bride" and "A League of Their Own" come to mind. There is not much spark in his direction and the burden to carry the film falls upon the shoulders of his stars. Techs are almost rudimentary with little attention paid to set with one room in Alex's apartment as the main place of action. This has the look of a small budget film that relies on its name director and its rising stars to cover the numerous flaws.