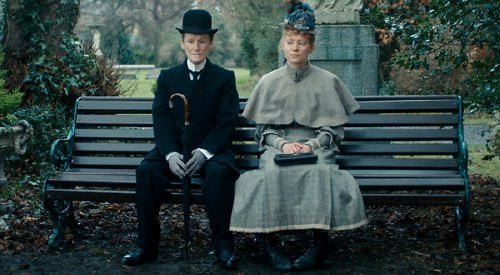 In late nineteenth century Dublin a middle aged woman who has hidden her identity for three decades works as a male butler at Morrison's Hotel. Having come from a poor, adoptive childhood and a teenaged trauma, she's saved every penny with an eye towards opening her own tobacconist's shop. But with this goal now on the horizon, she realizes she's been yearning for something more, especially when she's around young hotel maid Helen Dawes (Mia Wasikowska, "Alice in Wonderland," "Jane Eyre"). Could love and domesticity be a possibility for "Albert Nobbs?"

This Irish short story by George Moore has been Glenn Close's movie dream project ever since she played the role Off Broadway in 1982, but although she brings truth to her performance, the quietness and unassuming blankness of the character may temper critical and audience response in much the same way as Peter Seller's alien remove did in "Being There." Director Rodrigo García ("Mother and Child") has specialized in films about modern women, yet here he excels in period production at the expense of dramatic urgency. "Albert Nobbs" is likely to end up a curio rather than the crown jewel in Close's filmography, yet those willing to reflect on the film, especially her performance, will find soulful, damaged depth. We're introduced to Albert at hotel dinner service where we learn what a meticulous servant he is. Albert keeps eyes downcast, does not speak unless addressed and remembers the preferences of guests. His sole joy appears to be counting up his daily tips which he keeps hidden beneath the floorboards of his spartan room. This is an age where the working class live in fear, as evidenced by the abrupt firing of a servant, demanded by a guest over an inconsequential accident. Nobbs's world is shaken up by two occurrences. The first is the arrival of Joe Macken (Aaron Johnson, "Nowhere Boy," "Kick-Ass"), a good looking scrounger who's taken on by hotel owner Mrs. Baker (Pauline Collins, "You Will Meet a Tall Dark Stranger") by coaxing a temperamental boiler back to life. He not only becomes a rival for Helen's affections, but uses the young girl to manipulate Nobbs's favors to his benefit. The arrival of strapping painter Hubert Page (Janet McTeer, "Tumbleweeds") becomes another cause for alarm when Mrs. Baker informs Albert that they'll be temporarily rooming together. After a very awkward evening (Albert beds down on the floor to avoid revealing her true nature), Hubert becomes a surprising confidant and inspiration when Albert learns Hubert is not only pulling a similar sexual ruse, but has set up a household with wife Mary (Maria Doyle Kennedy, "The Commitments," SHOtime's 'The Tudors'). This possibility sets off Albert's courtship of Helen in earnest with Helen's love/lust for Joe muddied by the moral conundrum he puts her in with Albert. Close plays Nobbs like a naive child who cannot understand why b doesn't necessarily follow a, who just wants a 'wife' by the fire on her/his hearth as safe harbor rather than for sexual desire. This is in stark contrast to Hubert, who clearly enjoys a committed lesbian relationship behind closed doors. McTeer undeniably has the flashier cross-dressing role and is more convincing as a strapping man than Close is as her opposite take on maleness, but Close's character is an entirely different animal, a damaged child fighting for survival. The story is 'opened up' by touching on the hotel's often colorful guests, like Jonathan Rhys Meyers's Viscount Yarrell, but none of them get enough of a spotlight to really register with the exception of Brendan Gleeson's "The Guard") permanent resident Dr. Holloran, a man trying to escape into the bottle whose exposure to Nobbs's story corrects his path. As the love interest, Wasikowska is a pretty but bland maid whose only real character trait is the ability to peer over her own narcissism to finally observe Nobbs's inherent decency. Oddly, the scoundrel Johnson plays engenders more sympathy. Production design favors a genteel lace doily Dublin which is quite convincing, but Garcia's direction is perhaps too subtly aligned with this style. The adaptation by Glenn Close and novelist John Banville respects its audience to read between the lines - a good thing - but Albert Nobbs remains a ghostlike character in his/her own story where one good jolt may have given the film some much needed dramatic oomph.