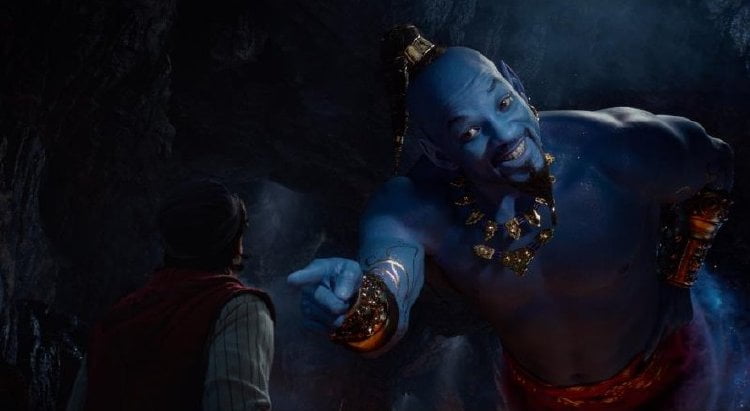 When a street rat bails out a woman who cannot pay for the bread she’s just given to two starving children, he figures out that she is from the palace by the silk lining of her dress and the quality of the bracelet he pays the merchant with before artfully stealing it back. Smitten, he sneaks past guards to return the jewelry his mischievous monkey Abu stole again, still not realizing he is speaking to Princess Jasmine (Naomi Scott, “The 33,” “Power Rangers”) herself. His presence is noted by the Sultan’s (Navid Negahban, “12 Strong”) Vizier Jafar (Marwan Kenzari, 2017’s “The Mummy”), whose attempt to drag the thief into his traitorous plot ends up empowering the lad with a Genie (Will Smith) in a magic lamp who offers three wishes to “Aladdin.”

If the director of “Lock, Stock and Two Smoking Barrels,” Guy Ritchie (who also adapted the screenplay with John August), seems an odd choice for a Disney musical, his touch becomes immediately apparent in the film’s stunt-filled opening getaway scene and the big budget artificiality of his bloated “Sherlock Holmes” franchise. The more politically correct and diversely cast live action “Aladdin” feels generically Disneyfied, its fictional Agrabah reflecting India as much as the Middle East with its Bollywood musical numbers and garish colors, its fakery notable in its CGI critters and cheesy props (Fantasyland is even name checked at one point). That said, I have to admit the film is not without entertainment value, most surprisingly within an engaging performance from Will Smith that utilizes a spectrum of talent we haven’t seen from the actor in quite some time. The 1992 animated original has been updated with Disney’s more recent embrace of female power, Jasmine wishing to succeed her father, as well as the removal of offensive lyrics reinforcing stereotypes from Alan Menken originals. Kids should dig it and parents not mind it. The film opens with a naturally hued Smith segueing into the story with the song ‘Arabian Nights (2019)’ for his two children. After Aladdin’s (Mena Massoud) adventure with Jasmine, who claims to be her own handmaiden Dalia (SNL’s overenunciating Nasim Petard), we’re given a look at palace intrigue. The Sultan wishes to marry off his daughter to ensure Agrabah’s legacy, but the vizier he trusts, Jafar, wants to invade neighboring countries and expand the empire. Jafar uses his cobra staff to hypnotize the Sultan but is foiled by Jasmine’s interruptions (a new Menken song, ‘Speechless,’ addresses the importance of her voice). Hoping to get his hands on the magical oil lamp deep within the Cave of Wonders, Jafar enlists the lovestruck Aladdin with promises of matchmaking, but he is once again thwarted, his betrayal causing Aladdin to end up with the lamp. The Genie who appears (a blue-hued and beefed up CGI Smith) cautions Aladdin on the pitfalls of wishes, guiding him towards the guise of Prince Ali, the better to win the hand of a princess who must marry a prince. Smith, of course, had enormous shoes to fill, Robin William’s manic vocal performance in the animated original legendary for his quickly morphing impersonations and witty improvised patter, and damn if the man hasn’t made the role his own. This genie delights in being a stylist, appears in drag, actually befriends his master and even gets his own love interest (Dalia). Smith’s introductory song, ‘Friend Like Me,’ stands on its own, his ‘Prince Ali’ a show stopping (if garish) extravaganza. But the ensemble is uneven, Scott a true Disney heroine while Aladdin looks like one, albeit one with a five o’clock shadow. Kenzari is the film’s main problem, a vanilla villain, a cardboard bad guy whose character makes an illogical jump in the film’s third act, appearing disguised in the street when last seen imprisoned in a dungeon. In a small role, Billy Magnussen (“Into the Woods,” “The Oath”) delights as a handsome, if dimwitted, Nordic prince. The production is hit and miss, Agrabah itself a bustling Arabian seaport with an impressive palace and Aladdin’s kitted out minaret hideaway. The Cave of Wonders looks like something from a shoddy mummy movie, its giant jewels obviously plastic. There is an amusing level of personality to the film’s Genie-hued magic carpet, but its trip around a nighttime sky (‘A Whole New World’) is clearly green screened. Costume designer Michael Wilkinson’s (“American Hustle”) designs for Jasmine are lovely excepting an overabundance of fuchsia which is also ill advisedly used for Scott’s lips. Smith wears a teal turban so enormous it is clearly a one piece construction balanced upon his noggin. Choreography for the film’s many dance numbers is exaggerated, the film’s princess engaging in moves just short of belly dancing. Disney’s live action remakes have rarely been worthwhile, only Branagh’s “Cinderella” and Favreau’s “Jungle Book” worth a rewatch. Ritchie’s “Aladdin” falls somewhere in between, besting “Beauty and the Beast” and “Dumbo” while no substitute for the original animation, despite that film’s problems. Grade: