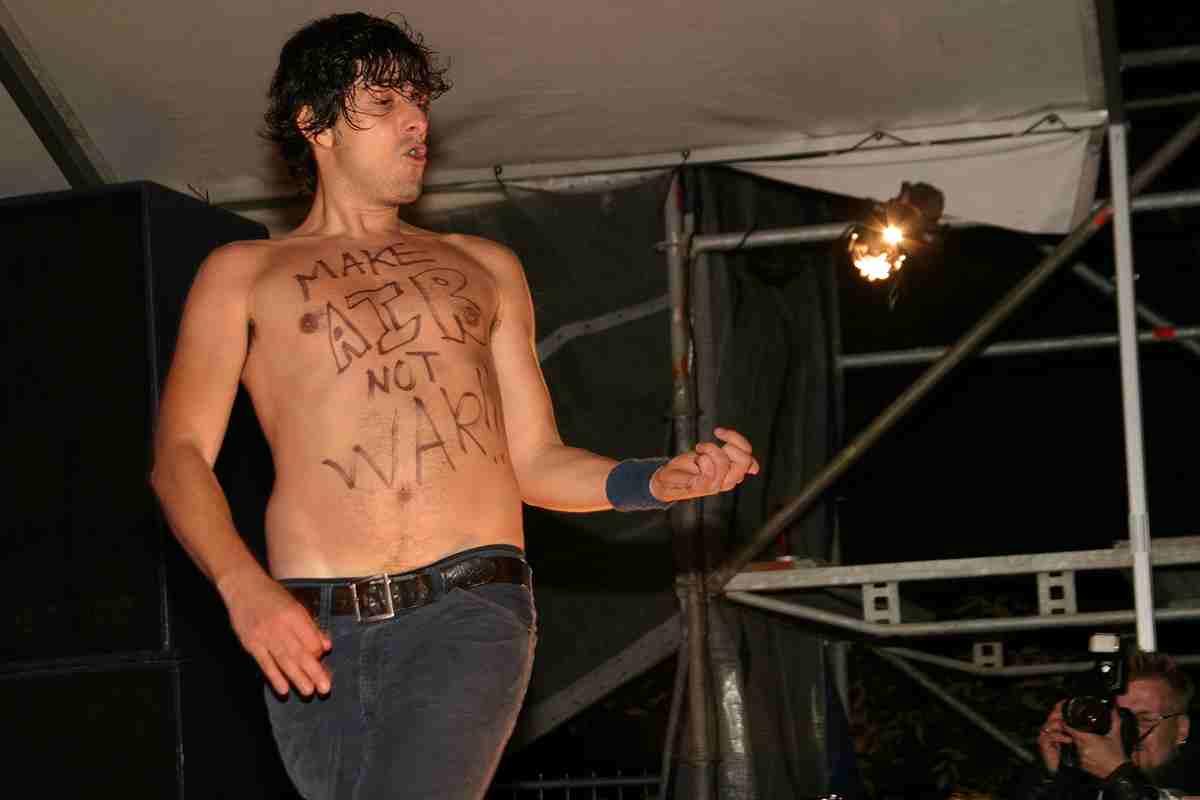 What used to be something you would do in the privacy of your bedroom has become a national event with the first annual U,S. Air Guitar Championship. Docu filmmaker Alexandra Lipsitz follows the fast fingered imaginary guitarist contestants from regional contests to the nationals and on to Finland for the world competition in “Air Guitar Nation.”

After reading about the World Air Guitar Championships held yearly in Oulo, Finland, Kriston Rucker and Cedric Devitt headed over for the 2002 competition and became its first American presence when, after attending world champion Zac Munro's training camp (!), Devitt took fourth place. The duo returned to the States and set about creating the first national championships that would turn the U.S. into an "Air Guitar Nation." 'Project Runway' producer Alexandra Lipsitz recognized this as a story ripe for the telling and began following Rucker and Devitt as arranged their first homebound competition, an East Coast semi-final held at New York's Pussycat Lounge, but none of them were prepared for the pandemonium that would ensue. Ticket sellouts, lines snaking around the block and late night talk show interest all greeted this first challenge, which also was graced with the inherent drama of two dynamic performers running neck in neck. The beauty of "Air Guitar Nation" is that it sounds like a totally silly joyride, and while it is exactly that you may just find yourself critiquing performances, routing for favorites, and dissecting the 4.0-6.0 scores based on the sport of figure skating. Competitors - and these guys, especially the Europeans, are serious - are rated on such things as 'technical' ability and 'Airness,' the ability to transcend fake guitar play and achieve virtual art form. They take on stage names, such as Dan 'Bjorn Turoque' Crane, a serious technical picker up against C-Diddy, a Hello Kitty breastplate, red kimono wearing showboater, and perform to such artists as Kiss, Motorhead, Cheap Trick, Queen, The Who, David Bowie, Boston and The Bags It is a bit surreal to watch performers 'tune up,' or see one guy get big points for a move in which he tosses an invisible guitar into the air and catches it, and bizarre when guitarists from around the globe are greeted at a staid reception held by the Mayor in Oulo's City Hall. But it's a breath of fresh air that there seems to be nothing but good will among these guys, each one ready with a compliment for an air show well done. The Finlandians began this, after all, as a peace movement, figuring that if one held an air guitar one could not carry a gun. The documentary is very well paced, beginning with a montage of just what one would presume to be the typical air guitar of a drunken concert goer and progressing into a film chronicling something like showmanship. The Australians are physically daring, a Belgian bemoans his 'suckiness' and one bare-assed guy brings guitar wanking literally to life. But while all these performances are enjoyable and Turoque is determined to win a title, no one can beat the gleeful C-Diddy at firing up the crowd. "Air Guitar Nation" is sure to stir up interest in the 2007 championships, set to kick off in June in fifteen different cities around the country, but it's an entertaining piece of work in and of itself, a slice of Americana founded in Finland.

We watched this imaginative little doc with a friend who plays his axe professionally. He, initially, pooh-poohed the competition as absurd but, as we watched the dedicated air guitarists perform, his attitude changed to one of respect. This is high praise from a musician and this praise is well founded. The film focuses, mainly, on two of the contestants, Dan “Bjorn Turoque” Crane and David “C-Diddy” Jung, as the air players climb up the competition ladder and perform for the enthusiastic fans at the U.S. Championship. As I watched these imaginary guitarists perform I was impressed by the skill and dedication that they showed in pursuing their “art.” These are not players giving faux perfs but musicians of imagination who have studied their music and, accurately, perform the songs with all the finger work and entertainment skill of their real guitar counterparts. Air Guitar Nation” follows the contestants to the varied stages where each has advocates and detractors. The enthusiastic fans cheer on their favorites and boo the rest but are always enthralled by the ability and showmanship of the faux guitar players. C-Diddy, dressed in bright red and wearing a huge Hello Kitty bling, is probably the most charismatic of all the entrants as he takes on any and all comers. I found myself cheering on all the players as they shimmy and shake while their fingers fly over their imaginary instruments. I, too, thought the whole idea of the air guitar competition as a lark, akin to karaoke singers and nothing more. But, the obvious skill these folks display changed me around to rooting for the best of these guys who show such realistic musical ability that my mind’s eye began to see the instruments they pretend to play. Air Guitar Nation” will appeal to genuine musicians and those who play their fake guitars behind closed doors. The straightforward documentary readily fills its 78 minute run time with a funny and intriguing look into an art form that has become a national, even international, phenomenon.