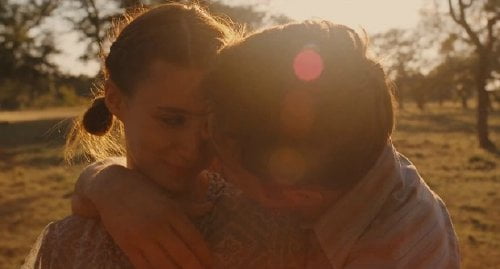 'I'm gonna leave you before you leave me' Ruth Guthrie (Rooney Mara, "The Girl with the Dragon Tattoo") tells her baby daddy Bob Muldoon (Casey Affleck, "Gone Baby Gone"). But nothing's going to keep Bob away from Ruth, not even the prison sentence he's taken on in her stead for the shot that hit Officer Patrick Wheeler (Ben Foster, "The Messenger") after their latest crime spree. After four years, Bob escapes, but that selfsame officer has been courting Ruth and motherhood has changed her priorities in "Ain't Them Bodies Saints."

Writer/director David Lowery hasn't made a movie so much as he's made an imitation of one. This pretentiously arty modern Western has obviously been influenced by the works of Terrence Malick, but Lowery isn't able to convey his story with imagery the way Malick can. By the time the filmmaker chooses to shoot Mara (in a burnt orange tinged sepia) with kittens, I was ready to throw in the towel. After the opening scene establishes the 'state of the relationship,' Lowery flips back and forth in time with plenty of inserts of fields of golden, swaying wheat and odd insects. We see that Texas shootout, but have no idea of the crimes that led to it. Ruth's childbirth is intercut with her and Bob's romance, though, so we know what led to Sylvie. Once Bob escapes, Skerritt (Keith Carradine, "Nashville") takes great pains to warn him away from Ruth and Sylvie and eventually we learn he fostered them both as kids, lending a whiff of incest to the proceedings. Then the tale unfolds exactly as you'd expect. Affleck and Mara have both delivered some very fine performances, so it's odd that Foster and Carradine are more notable here. Playing against his usual bug-eyed villainous types, Foster paints a portrait of a gentle man who has fallen hard for Ruth. His courtship is convincing. Mara has one good scene, letting go of her lover, but Lowery and his actors have never gotten us invested in the couple to begin with. The folky fiddle score is interesting, but calls too much attention to itself, just like the film's affected title. Lowery clearly has the chops as a filmmaker - he just needs to find confidence in his own voice.