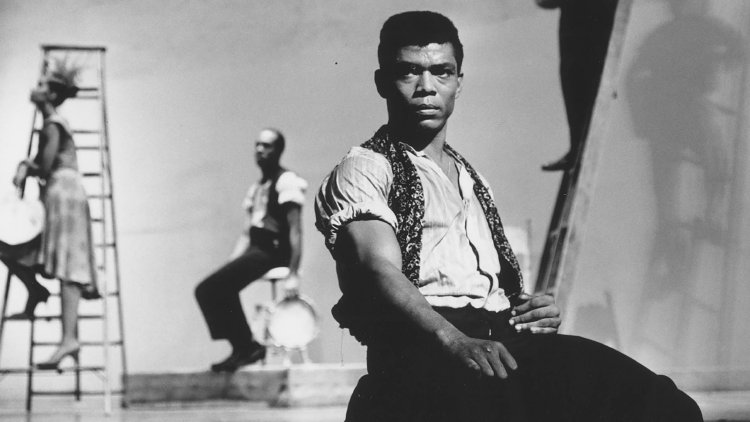 At 1988’s Kennedy Center Honors, Cicely Tyson honored the man who brought Black expression and experiences to the world of modern dance.  He would die the next year of AIDS after having kept his sexual orientation from the public due to the influence of his mother and their church, a decision which may also explain his lonely remove and all encompassing work ethic.  This highly influential dancer, choreographer and American Dance Theater founder was Alvin “Ailey.”

That ‘remove’ is mentioned by several of Ailey’s former dancers and collaborators who describe his troupe as a family and express their love for him while also stating that he kept himself apart, an unknowableness which suffuses director Jamila Wilmot’s (“Town Hall”) work here.   Ailey is structured around a new dance being prepared to celebrate his company’s 60th anniversary, one in which we see choreographer Rennie Harris observing repetitive moves by dancers as he builds the ‘language’ for the new piece.  Wilmot then begins to flash back, building Ailey’s professional story.

He grew up watching his mother, a field worker, ‘going from place to place, looking for a place to be.’  Wilmot uses b&w film clips and archival footage to accompany Ailey’s recorded words that approximate the types of scenes he had witnessed as a child. He moved to NYC in 1954 and began to study and work under such notables as Martha Graham, but he figured out very early that he had his own ideas and seeing Black dancer Katherine Dunham perform provided inspiration.

There is some footage of Ailey’s own dancing with Carmen de Lavallade and he was already taking the dance world by storm in the early sixties with his company’s ‘Revelations,’ a spiritual in dance form.  Dancer Judith Jamison, who would take over as artistic director after Ailey’s death, describes touring in those days, with everything – dancers, props, staging, tools – all on one bus.  Stage manager Bill Hammond, who is white, talks about the restrictions of traveling with a mixed race company.  Their reception on an under publicized European tour built by word of mouth, from a sparse attendance of twenty-five to sold out audiences stomping their approval.

Even though we get little on Ailey’s personal life, Wilmot has found enough to reflect it in his work, the Alvin Ailey American Dance Theater responding to such events as the murder of Black Panther Fred Hampton.  We see those childhood memories in his dancers’ movements.  In one astounding tableau, dancers appear to be hanging.  Ailey’s love for his mother, who he described as a great beauty ‘like Lena Horne,’ sustained him all his life, but the impression we get is of a sad one, a breakdown landing him in a mental institution in 1980, any romantic love hidden outside the dance floor.

Alvin Ailey is right up there with the great modern choreographers like Martha Graham and Bob Fosse. He pioneered and introduced Black American dance to the country and the world and established a national culture as “Ailey.”

It is funny, just a couple of weeks ago, I was thinking about dance, choreography and the greats of the dance arts mentioned above. This segued quite well for me as I sat down to watch director Jamila Wignot’s heartfelt and detailed look into the artist’s long life and career.

The work is divided into two halves with one about Ailey’s colorful and successful career as dancer and choreographer, his ups and downs and his struggles with his sexual identity and his losing battle with AIDS. We are shown his early appearances on stage and the dances he designed, beginning with “Blues Suite (1958)” and, then, his most famous and performed work, “Revelations (1960).” Ample time is also spent showing performances of his many other dance works and on interviews, then and now, of those “closest” to the man. (He was, we learn, a solitary man devoted to his mother and only came out of his reclusive “shell” when older.)

The other half of “Ailey” covers a choreographed piece created in honor of Alvin Ailey and the 60th anniversary of his American Dance Theater, “Lazarus (2018)” by Rennie Harris, and shows the nuts and bolts and hard work that goes into the creative process. We get, as I hoped, lots of fine dancing and frequent displays of grace and beauty inspired by Ailey. In one brief number, the dancers take on a pose that, shockingly, replicates lynching. It was a stunning moment for me.

I do compare “Ailey” to the expertly done bio-dance film about the incredible choreographer Pina Bausch and director Wim Wender’s examination of her life and dances, shot in dynamic 3D, with “Pina (2011).” That work stands in a league of its own. But, that said, Jamila Wignot’s fine work is not shabby, either.

After watching “Ailey” my interest to know more shows that Wignot, while constrained by the brief one hour, 22 minute run time, touches on all aspects of his creative mind and life. There is more to the man than covered in this fine docu-bio but that is good in that it makes you, like me, want to know more.