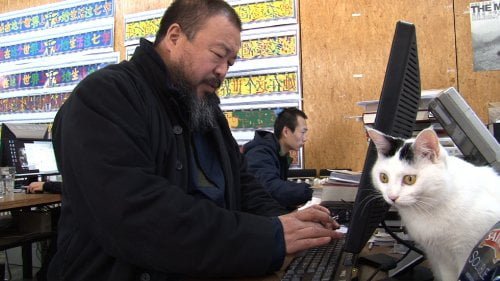 Internationally acclaimed Chinese artist and political activist Ai Weiwei followed in the footstep of his father Ai Qing, a man who, in the 1960s, the Communist government declared “an enemy of the people” for his outspoken criticism. The younger Ai designed the famous Bird’s Nest in the 2008 Beijing Olympics and, before the games began, protested against the Communist’s political oppression of the Chinese people. First time documentary filmmaker Alison Klayman chronicles Ai’s feats and accomplishments, as well as his own political oppression, in “Ai Weiwei: Never Sorry.”

I knew very little about Ai Weiwei, his works or his politics but the little I knew intrigued me. Tyro director (writer-producer-cinematography-sound-recordist) does a fine job, first time out of the gate, in teaching me about the man, his art and his political activism. Shot mainly through Ai’s point of view, he tells us about how his art is constructed – he has others do the actual work while he “directs” their efforts. He unabashedly criticizes his government and its policies as his story spans the globe as he travels abroad to exhibit his art in New York, London, Tokyo and Munich, all the time talking about the problems his country and people face now and into the future. Klayman follows Ai at home as he creates his art and speaks his mind, much to the chagrin of government officials (who held Ai incommunicado for 81 days during 2010). This dedicated artist wants a better life, without political oppression, for himself, his family and, especially, the people of China. The telling of Ai’s fight for freedom of thought and expression is evenly handled by the first-time director and Ai, if he cannot speak out in public, freely talks to the camera (and us).