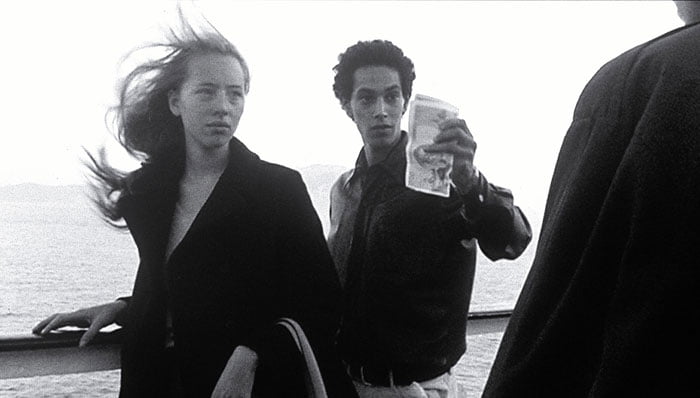 Lili (Isild Le Besco, "Sade," "Girls Can't Swim") is an art student living with her seemingly disinterested family and bored with her current boyfriend. When she sets eyes on bad boy Bada (Ouassini Embarek, "The Good Thief") it's love at first sight, but when he and his partner Alain (Nicolas Duvauchelle, "Trouble Every Day") must run from the law after a high profile armed robbery, Lili must decide whether she wants to leave her entire life behind "À tout de suite."

Writer/director Benoît Jacquot ("The School of Flesh, "Sade") takes the real life tale of Elisabeth Fanger (from her memoir "When I was 19") and makes it the basis of a faux Nouvelle Vague film, a black and white Godardian bandits on the run saga that morphs into a character study of a young woman reinventing herself. Cinematographer Caroline Champetier ("Cet amour-là") sets Isild Le Besco in every kind of light, from bleached out sunlight to backlit darkness and the mysterious planes of the star's face are loved by her camera. The bourgeois nineteen year-old takes advantage of every opportunity for adventure. When an older man (twenty-three year old Gerard, a colleague of Bada's) offers her and a girlfriend a glass of champagne, she hits him up for lunch as well, then loses all interest when she spies the exotic Moroccan. She loves Bada's sleek looks and the way he flashes cash and the expensive bracelet he buys her binds them. When television news reports show Gerard and a bank employee dead in a robbery/hostage situation, Lili realizes her lover is a bank robber, but she's excited by his predicament and harbors him and Alain in her bedroom, then leaves everything when Alain's girlfriend Joelle (Laurence Cordier) arrives with a getaway car. After a brief stay in a country hideout, the foursome head for Spain and are jubilant when they and their cash get through customs. 'It was the good life. I don't know if it was actual life.' Lili says as foursome shop and stay in fancy hotels, but by the time they make it to Tangiers, the guys are having trouble passing money and when Lili's arbitrarily held by Greek customers, Alain considers her a hot commodity. Suddenly, Lili and Bada's plans to hook up if they're ever separated have hit a snag and the young girl finds herself abandoned in Southern Europe without a friend to turn to. For all the urgency of its title and number of its locations, "À Tout de Suite" is a meandering film, the indulgence of a bored teenager. What makes it a draw is its minimalist style and the story's odd turns. Bada's disappearance from the film is as unexpected as Janet Leigh's was for "Psycho's" original audiences, the film's second half like the first only in style. And Jacquot has really excelled at recreating another era - the movie feels like a lost New Wave film just coming to light. Jacquot favors his characters and their transportation (cars, boats, trains) over their eventual locations, accentuated by his favoring of closeups and only using music for scenes of travel. Lili may not be the most likable heroine, defined as she is by her own desires, but she's a most attractive traveling companion and her odyssey attains a dreamlike quality. 'We have several lives,' her mother observes after she's paid the price for her impulsive youth. 'What if only one is real?' the unnamed girl replies (Lili and Bada are screenplay names that are never heard in the actual film), before defining herself once again with the romantic notion of her lost lover.

Director Benoit Jacquot is quite obviously influenced by the films of Jean-Luc Godard (“Breathless” came barreling to mind as I watched “A Tout de Suite”) and his latest work benefits and suffers in a similar fashion to the legendary Godard’s oeuvres. A Tout de Suite” is languid, minimalist filmmaking that makes its 95-minute runtime seem way too long as Caroline Champetier’s camera lingers for long moments on scenes where little if anything happens. But, there is an intriguing quality about the film that compels the viewer to watch as Lili (Isild le Besco) runs from her staid life with her father and into the arms Bada (Ouassini Embarek) a mysterious young Moroccan bank robber. One would think that a story about crime and going on the lam would be taut and tense. Not so here, though, in what is more characters study about a naïve 19-year old smitten by a life of danger. Le Besco is an unusual looking young lady who has presence as the character Lili. It helps that the camera likes her unusual beauty. The rest of the cast carries through the film’s minimalism but are overshadowed by the main character. The film, in faux black and white video, lacks the crispness and shading of real B&W film stock, giving the film a forced “art” look that may have been better served with desaturated colors instead. A Tout de Suite” is a sometimes-interesting film, particularly its first 30 minutes, but runs on long after the intrigue ends and Lili learns that promises can be broken. She is left adrift and must fend for herself but with a newfound sense of independence. More story and less scenic rambling, and some liberal cutting, would make this more appealing to more people. Its languid pace kept me at arm’s length.