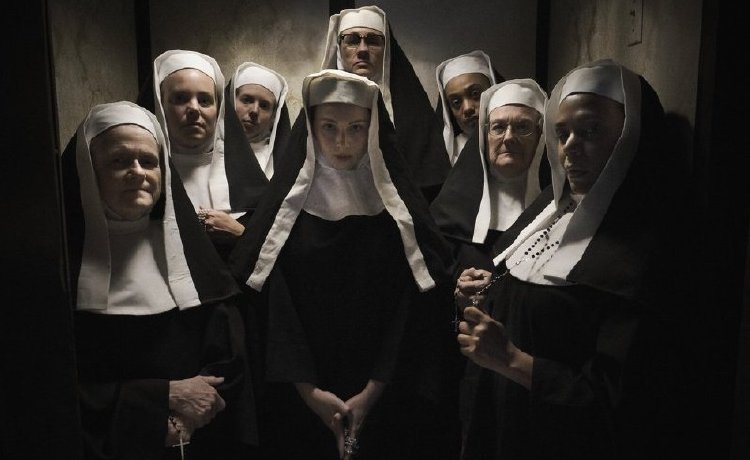 Just after Mother Superior (Mary Buss, "Climate of the Hunter") of the closed Carmelite Santa Theresa convent has offered wishes for an older nun’s ‘birthday’ with Jesus, one of the younger nuns screams ‘You’re all whores!’ as the dining table rocks and objects float in the air.  After securing the woman for her own safety, Mother must do the unthinkable and allow a man, Father Frank Donahue (Ben Hall, "Climate of the Hunter"), onto the premises to perform an exorcism on Sister “Agnes.”

If you’ve seen the trailer for “Agnes,” it suggests quite the nun-centric exorcism tale, but unfortunately that is literally only half the story.  Cowriter (with John Selvidge)/director Mickey Reece ("Climate of the Hunter") begins his film like a blackly comic B movie, the irreverent Father Donahue thrown into the uptight Mother’s convent like a grenade.  But just as things are really heating up, suddenly we’re whiplashed into an entirely different film, one in which Agnes’s best friend in the convent, Mary (Molly Quinn, TV's 'Castle'), struggles to create a life outside of it, the events of the first half closed out with a bit of exposition.  It’s all a bit of bait and switch.

That first half suggests a number of things which it never resolves.  The Bishop who calls Father Donahue in to assign him to Agnes’s case clearly has it in for him because apparently there have been accusations which Donahue has not denied (that’s as much detail as we get).  Donahue makes it quite clear to the pious Benjamin (Jake Horowitz, "The Vast of Night"), the seminarian who will accompany him, that he doesn’t believe in ‘that medieval hoo-ha,’ or demons for that matter, but has witnessed exorcisms working and so believes they have a psychological impact on certain subjects.  Mary appears to witness several supernatural events within the convent outside of Agnes’s (Hayley McFarland, "The Conjuring") presence, suggesting that she, too, is possessed.  She also has flashbacks to their life before, one which appears to have been fast and loose.  We learn that both Agnes and Mary lost someone they had loved, a lover and a son respectively.

When the Bishop and Donahue’s pastor speak to him initially, they are seated in a room prominently outfitted with hunting trophies including a ferocious lion, suggesting that Donahue is their prey, a theme that will echo in the second half by the men who interact with Mary, but which makes little sense in that first half.  That is where Donahue, whose jokey sexual innuendos rattle Mother while amusing the younger nuns, especially Sister Honey (Zandy Hartig), quickly loses control of the situation, calling in flashy television exorcist Father Black (Chris Browning) who arrives in a red sports convertible with a chain smoking assistant who looks like a drag queen.  Just as we hit peak camp, however, we’re thrust into a serious drama.

Where is all this headed?  Reece has the talent to keep you hooked, but if you were looking for a serious examination of crises of faith, that isn’t what he’s sold this as.  Mary’s overly friendly landlord Earl (Bruce Davis, "The Vast of Night") suddenly increases her rent by almost 50%.  Her boss at the grocery store, Curly (Chris Sullivan, TV's 'This Is Us'), hits on her.  Sisters Honey and Ruth (Rachel True, "The Craft") meet her in a café, encouraging her to join them in their new, less restrictive urban convent.  Mary does a lot of laundry and goes to a stand-up show by Paul Satchimo (Sean Gunn, "Suicide Squad"), the man Agnes used to love.  Things don’t end well all around and so Mary seeks Benjamin (who has featured in her flashbacks or, given their sexual nature, perhaps fantasies?) for council.   The whole ends on a serious discussion of how to know God, albeit one using a meat sandwich metaphor.

Reece, who has quite the indie filmography, apparently has a following, but based on this and his previous film, I’m taking a different route.