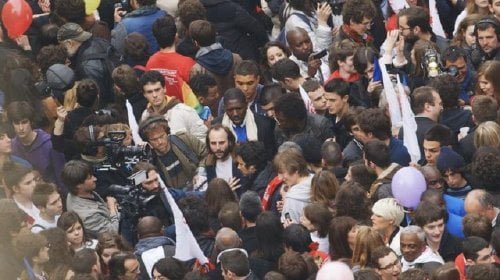 As her boyfriend Virgil (Virgil Vernier) good naturedly sits with her kids Liv and the bawling Jeane, Laetitia (Laetitia Dosch) is in chaos, late for work and undecided on what to wear. New babysitter Marc (Marc-Antoine Vaugeois, "The Fairy") takes over just as Laetitia's loose cannon ex Arthur (Arthur Harari) begins to call from outside her building and she has minutes to begin reporting live on the streets of Paris where the left and the right anxiously await the results of the Hollande/Sarkozy presidential election in an "Age of Panic."

Writer/director Justine Triet leverages her documentary experience in her feature film debut to create a sense of escalating stress, a bubble about to burst in both the mobbed streets of Paris and Laetitia's personal life. Utilizing handheld cameras, Triet cross cuts between her two main protagonists as they start their day, folding supporting players in as Laetitia and Arthur head towards a collision in the eye of a storm. Before we know who he is, we see Arthur attempting to put together gifts in various shops with limited cash. With his stringy flowing locks and over-sharing nature, Arthur comes across as a homeless person with some form of mental imbalance. Having managed to put herself together, Laetitia is ferried around on the back of a scooter, stopping to conduct on the street interviews and give sound bites. When Marc, who's been instructed to not allow Arthur in (he's only allowed supervised visits on court appointed dates), does anyway, a volley of cell calls succeeds in keeping the action bouncing. Laetitia instructs Marc to bring her children to one location, then another, to keep them away from their father. Marc calls in regular babysitter Emilie (Emilie Brisavoine), who got him the job, as backup. Arthur visits legal aide Vincent (Vincent Macaigne, "A Burning Hot Summer"), an old neighbor, to plead his (utterly ludicrous) case, then sets out amongst the throngs. Triet uses opposing forces to illustrate the stresses of modern life. The divisive political atmosphere is the pressure cooker Laetitia works within, Arthur's deranged logic the opposite of Virgil's calm. After Arthur succeeds in getting arrested, having accosted a man who stepped in to intervene, Laetitia lets off steam by throwing a drink at a rude, aggressive cafe waiter. At 2 a.m., unwinding with wine and Virgil, Laetitia is surprised by a visit from Arthur and Vincent and the games begin again. Dosch is able to convey panic underneath a professional veneer. We can almost physically feel events overtaking her, her struggle to keep her head above the surface. Harari is great, an annoying presence - even without verbalizing, he's always audible, jittery in his movements. I must admit I had a hard time connecting Virgil's acquiescent placation of Arthur to the day's election hysteria other than to see two opposing parties coexist, perhaps upsetting the pivot in the middle. Nonetheless "Age of Panic" is a personal expression of a world growing increasingly divided.