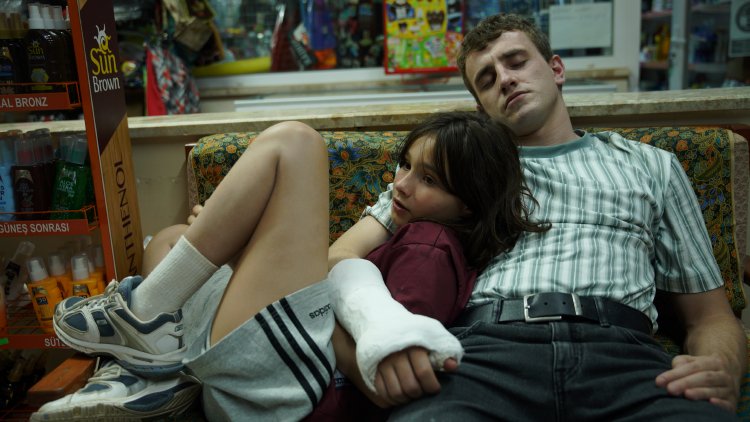 Twenty years after they spent their last holiday together at a Turkish resort when she was 11 years old, the adult Sophie (Celia Rowlson-Hall, "Vox Lux") reconsiders the man who’d separated from her mother, the father, Calum (Paul Mescal, "God's Creatures"), of her fading memories in “Aftersun.”

Writer/director Charlotte Wells makes her feature debut with an idea that came to her about the haunting nature of memories after finding pictures of her own adolescent self on a vacation with her dad.  Her film is a mixture of short snippets of experience layered between landscape reveries and the effect is melancholy and mysterious.  Wells has also unearthed a huge discovery in newcomer Frankie Corio, who gives an amazingly assured and sensitive performance as the 11 year-old Sophie.

The film begins with the chaotic shots of a videographer who hasn’t yet focused on their subject, settling down into what we can see is a man and his daughter in a nondescript hotel room.  Thankfully director of photography Gregory Oke, a Wells NYU film school buddy (along with editor Blair McClendon), takes over with more traditional, albeit very close up, shots as Calum makes a phone call inquiring why they’ve been given a room with only one bed when he’d booked one with two.  It is telling that the grown man takes the cot and leaves his child with the bed, the sequence ending with the sound of her sleeping breathing segueing into the sound of his, an intimate connection.

The resort these two are staying at is one of those places that cater to British tourists, largely keeping them within its own confines and Calum and Sophie have an easiness together lazing away days by the pool or shooting billiards, the latter activity drawing Sophie out into a group of older, benevolent teens impressed with her ability.  Sophie also plays arcade games with Michael (Brooklyn Toulson), a boy her age who will give her her first serious kiss, a fact she shares with dad along with conversation about her mom and Calum’s own past girlfriend.

But there is a palpable weight burdening Calum, a dark cloud mostly seen in solo moments.  He’s also a jumble of contradictions – a man who appears spiritual with his practice of Tai Chi and book on meditation yet who sports a cast on an unexplained broken wrist and one who Sophie tells us hasn’t much money yet spends 850 (1990’s!) pounds on a Turkish carpet he seems mesmerized by and that we will see later on the adult Sophie’s bedroom floor.

Despite its emotional impact, Wells’ approach to her memory character mystery leans too heavily into obfuscation that may leave many viewers at sea.  It doesn’t become entirely clear that Sophie is remembering events as an adult until near its very end, a postcard from dad lying on a coffee table in the present and a dance between father and daughter flitting between the 11 year-old and the new mother.  In fact, Wells interjects the strobing of the dance floor in snippets early on, a confusing device but one which will reward those paying careful attention with its quick cuts of Sophie at two different ages and two entirely different interpretations of Calum, a joyous, goofy one dressed the way we will see him in the actual scene, the other wearing a different but recognizable shirt looking anguished.

The pixiesh looking Corio relates to everyone and everything around her with keen intelligence and curiosity, making her Sophie a travel companion for any age (watch how she skips among adults at a Turkish tourist site to engage their cooperation in surprising her dad with a birthday song).  The up-and-coming Mescal continues to impress, this performance suggesting great depths of feeling shrouded in a cloak of unknowability, someone perhaps far removed from Sophie’s adult life.  “Aftersun,” a double barreled title referring to the pair’s habit of moisturizing after sunbathing as well as its symbolic suggestion, once again reminds us we can never truly know another, even those we love the most.