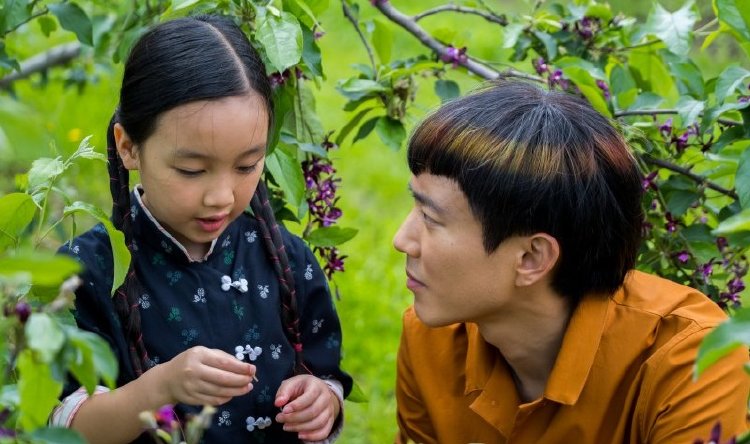 In a near future, mixed race couple Jake (Colin Farrell) and Kyra (Jodie Turner-Smith, "Queen & Slim") purchase an Asian android (Justin H. Min, TV's 'The Umbrella Academy') to ground their adopted Chinese daughter Mika (Malea Emma Tjandrawidjaja, TV's 'iCarly') within her own culture.  While Mika adores him, his relief on parental responsibilities has inadvertently put some distance in the family, but when he malfunctions and shuts down, his profound influence on each of them will guide them back together “After Yang.”

Writer/director/editor Kogonada ("Columbus") returns adapting Alexander Weinstein's short story ‘Saying Goodbye to Yang’ and his sophomore film is every bit as quietly profound as his first.  This filmmaker has a unique ability to marry poetic visual and aural elements with existential ideas in a way that is deeply human – even when seen through the eyes of an android.  While suggesting that we are but the sum of our memories isn’t a new idea, “After Yang” expands upon the notion, using memories both organic and digitally recorded to suggest a connection across time and space, something which may just be love itself.

The film ponders some very deep ideas within such day-to-day activities as brewing tea, but that doesn’t mean it’s all heavy going.  Take the film’s opening credit sequence, one which may be hard to beat this year, in which this multi-ethnic organic and technological foursome compete in a monthly dance-off, costars Clifton Collins Jr., Haley Lu Richardson and Sarita Choudhury each appearing in a synced dancing lineup of their own.  It is a joyous and amusing beginning and even if Yang breaks down right from the get-go, disqualifying Mika’s family, his presence will dominate throughout.

Jake immediately focuses on getting Yang repaired, the strain in his marriage apparent with Kyra’s displeasure at learning he didn’t purchase Yang new, but as a refurbishment from a company no longer in business, making his warranty iffy.  Kyra is obviously the major breadwinner in this family, Jake’s tea shop an indulgent throwback which she supports, but his determination to get Yang fixed while dealing with a limited budget is adding to her workload and Mika is getting caught in the middle of their differing attitudes.

Down $250 for a 12 point diagnostic which reveals an inner core issue so severe he’s offered either $1,000 towards a new model or Yang’s head rebuilt as a digital assistant, Jake turns to his neighbor George’s (Collins Jr.) referral of not-exactly-legal repairman Russ (Ritchie Coster, "Let Me In") who hacks into Yang’s inner core and makes a disturbing spyware discovery.  Offering to keep Yang plugged in lest he decompose, Russ refers Jake to Max to further investigate.  But Max has been replaced by Cleo (Sarita Choudhury, "The Green Knight") who says Russ hasn’t found spyware but a type of memory retention deemed illegal for privacy purposes.  Cleo, who runs a technosapien museum, is absolutely thrilled with the discovery, offering George a reader to check Yang’s memories but no hope of repairing him.

Kogonada’s editing is sublime, featuring repetitive beats as Jake views Yang’s memories and various characters actually remember the same scene (he’ll also wrap on a new image repeated from an earlier memory of Yang’s, a sign of healing with the android as its full circle conduit).  Each member of the family is enriched through an experience with Yang, each of his scenes with Mika, Jake and Kyra deeply moving, Jake’s even affording Farrell a comedic opportunity to pull out a solid Werner Herzog impression (in reference to the 2007 documentary ‘All This Tea’).  Then Jake makes another historical discovery in Yang’s memories – a love interest (Haley Lu Richardson, "Columbus," whose relationship with Yang is attached to another film, 2001’s “All About Lily Chou-Chou”) – and tracks the young woman, a clone, down, adding to the film’s consideration of what makes one ‘human’ (and whether being human is the end-all be-all of a superior existence).

Although this is science fiction, we’re reminded of “Columbus” not only via Koganada’s themes but with the mid-century modern architecture and furnishings of Jake and Kyra’s home.  If the filmmaker’s ensemble at first seems disconnected, we learn that is by design of Yang’s yin yang effect, the Yang of it all persevering in the end.