After the Wedding (Efter brylluppet) 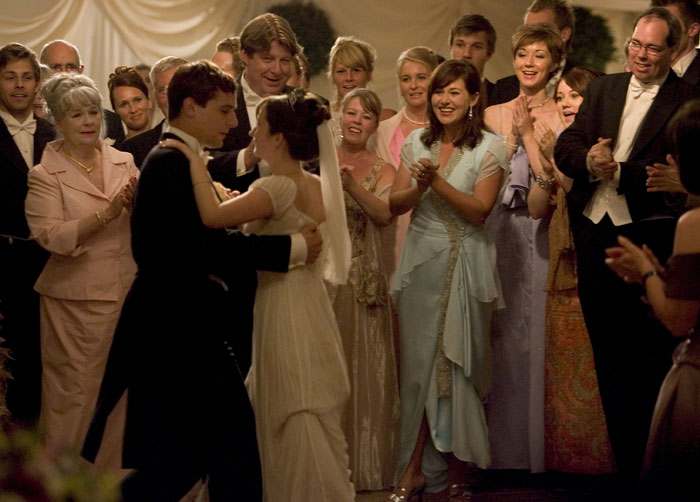 Jacob (Mads Mikkelsen, "Open Hearts," "Casino Royale") is devoted to the orphaned children, particularly 8 year old Pramod (Neeral Mulchandani), that he serves in Bombay and is frustrated when he is told he must return to Denmark to procure essential funding from the wealthy businessman who may be their last hope. Jacob bristles at the trappings of the rich, but Jørgen (Rolf Lassgård) appears to be a nice man who insists Jacob attend a family celebration that weekend. Jacob is astonished by the secrets revealed there and his life will never be the same "After the Wedding."

Boy those Danes really know how to stage explosive family get togethers (see "The Celebration," "The Inheritance"). Cowriter (with Anders Thomas Jensen, "Brothers")/director Susanne Bier's ("Open Hearts," "Brothers") latest family drama bursts off the screen as one life-altering secret after another is exposed while it quietly comments on global issues in the background. Thanks to films like "King Arthur" and last year's "Casino Royale"), star Mads Mikkelsen is becoming internationally known and while he delivers another fine performance here it is Rolf Lassgård who proves the revelation as the billionaire with a huge hidden agenda. After assuring Pramod that he will return for the young boy's 8th birthday, Jacob arrives in Denmark where he is checked into a suite of startling luxury (two bathrooms, private balcony, sauna). The next day he is met by Christian (Christian Tafdrup) who accompanies Jacob via limo to meet the man who will become his father-in-law that weekend. Jacob refuses hospitality (Jørgen presses a drink anyway) and edgily presents his case, after which Jørgen pronounces him 'an angry man' but one with passion. Jacob arrives at the wedding of Jørgen's daughter Anna (Stine Fischer Christensen) as bidden, but he is late enough to interrupt the vows with his entry. Jørgen's wife Helene (Sidse Babett Knudsen, "Mifune") turns several times to look at the man in the back and we think she is annoyed, but come the reception we realize her interest comes from someplace far deeper. When Anna toasts her parents and makes the odd admission that she is not Jørgen's biological daughter, Jacob realizes that his rich potential benefactor has called him to Denmark for more than one reason. Bier is a master at getting at the complexity of human behavior and emotions and her and Jensen's script is peppered throughout with understated observations. While Helene frets over what could potentially go wrong with the wedding, Jørgen laughingly replies that 'Anna will get married many times,' a light statement that bears weight. Jacob is annoyed by his flirtatious tablemate at the wedding who reveals she was Christian's former girlfriend but that 'Anna always gets what she wants.' And what of Jacob's promises and pronouncements to Pramod, especially his disdain of the rich? These words come back to haunt as their verity or lack thereof come to light. Bier swings a dramatic pendulum with her character arcs as well. We watch Jørgen assume the behavior of Jacob's past and only later realize it is a presage to the same fate that befell the younger man - losing Helene, albeit in a very different way. Jacob, in turn, assumes a lifestyle he professed to hate, one family exchanged for another at opposite ends of the earth. Even the score shows these progressions and exchanges, with the Indian riffs that pervade early scenes gradually receding. This deserved 2006 Foreign Language Film nominee is another impressive entry in Bier's filmography and the terrific acting work of Rolf Lassgård should be remembered at 2007's end.