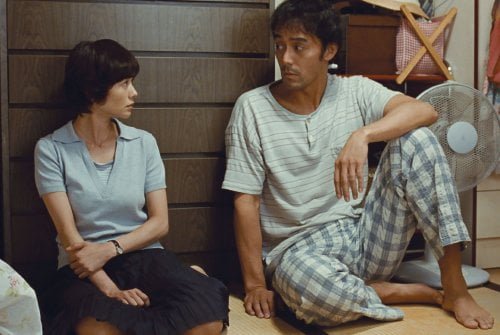 Ryota (Hiroshi Abe) was once a promising novelist who frittered away the money he made gambling and alienated his family. Now a struggling private detective, he is still in hock and can barely come up with the money to pay child support for his son, Shingo (Taiyo Yoshizawa). A gathering typhoon brings Ryota, Shingo, his ex-wife Kyoko (Yoko Maki) and his aging mother Yoshiko (Kirin Kiki) together for one night that will give Ryota the chance to bond with them again in “After the Storm.”

After his father's death, Ryota Shinoda (Hiroshi Abe, "Still Walking," "I Wish") begins to reconsider his life. Having had early success as a novelist, Ryota is not where he expected to be. Now working for a detective agency, he's in debt, struggles to make his rent and defaults on child support but cannot resist the gambling addiction that consumed his father. He watches as his ex-wife Kyoko (Yoko Maki, "Like Father, Like Son") takes up with another man and tries to reconnect with his young son Shingo (Taiyo Yoshizawa) by buying him baseball cleats he can ill afford. With a typhoon coming in, Ryota engineers his family's reunion in the cramped apartment of his conspiring mother Yoshiko (Kirin Kiki, "Still Walking") and comes to terms with the way things are "After the Storm."

Japanese writer/director Hirokazu Koreeda ("After Life," "Our Little Sister") is one of our most humanistic filmmakers, his films about families trying to stay or pull together during times of stress. His latest, filmed at the Asahigaoka Housing Complex in Kiyose, Tokyo, where he himself lived until his late twenties, is easy to embrace, its tone gently comic with an underlying note of melancholy. Koreeda is a master of portraying complex human emotions without spelling them out, a downward glance or an actor's stance telling us all we need to know. As the Shinoda matriarch, Kirin Kiki almost runs off with the whole show as one regards her maternal quirks with affectionate recognition.

Arriving at his mother's on the hunt for a sesshu scroll his father had told him was worth 3 million yen, Ryota instead finds a bundle of pawn slips. Covering his true motivation, he offers money to his mother to buy CDs. He and his married sister Chinatsu (Satomi Kobayashi) regard each other with suspicion, each believing the other is sponging off mom's pension (Chinatsu frequently stops by to pick up meals for her family and it is revealed Yoshiko's paying for her daughter's 'figia' skating lessons). On the job, he cheats his boss (Lily Franky, "Like Father, Like Son") counter offering clients to suppress information and constantly borrows money from his much younger partner Machida (Sosuke Ikematsu, "The Last Samurai").

Kyoko is annoyed when Ryota tells her that he doesn't have her support money at their monthly meeting. He offers excuses and a promise to have it by the end of the day. After indulging his son, he takes Shingo to visit his grandmother, diverting Kyoko there to pick the boy up, but Yoshiko asks them all to stay the night so she won't be alone during the storm. Her arrangement of futons tells another story. Later that night, Ryota suggests he and Shingo go out during the storm to shelter in the playground's octopus slide, just as he and his father had many years ago. (Koreeda's old home is a character unto itself, an aging community in an aging complex, Yoshiko's cluttered apartment the time capsule of a lifetime, the playground a nostalgic bubble.)

Koreeda conveys so much information through human behavior. Chinatsu's husband's unsubtle excitement at the news of his ex sister-in-law's arrival underscores Ryota's realization of what he took for granted. Yoshiko's fussing over her adult son is a message to Kyoko that he still needs her. The two women reveal their philosophies through food, Yoshiko believing stew needs to cool slowly to develop flavor ('just like people'), Kyoko deriding men's paying 'too much attention to expiration dates.' Ryota is constantly reminded about people not living up to their potential, Shingo asking him if he became what he wanted to be, a cheating client wondering how her life ended up this way. Shinoda Sr.'s old pawn broker delivers a potent message and unexpected windfall with things the old man left behind. Most moving of all, Abe and Maki convey the love between them still as Abe's Ryota looks back while Maki's Kyoko moves forward.

Hirokazu Kore-eda is the master of little, slice of life films where car chases, shootouts and mayhem are not a part of his world. Instead, he creates beautifully rendered stories about family that take the day-to-day lives of his subjects and puts us into their place and time. Even though nothing “happens” in his stories, the filmmaker mesmerizes his audience with the most ordinary characters. Kore-eda’s talent, though, makes you want more, even after the credits roll.

The sad sack hero of this tale, Ryota, is played with depth by Hiroshi Abe. He is a man full of promises – to his mother, his ex and his son – but rarely, if ever, fulfills them. His family is used to his ways, accepting his good intentions, though never realized, with a grain of salt. He is the one in the family who was destined, as a child, to “bloom late,” something he never quite does after the publication of his one and only novel years ago.

Kirin Kiki as Ryota’s mom is, in a word, superb. She epitomizes Yoshiko, who wants to move to a swankier home, something her son can ill afford to do – though he keeps on promising. Yoko Maki, as his ex, shows both her exasperation with her former spouse and the love she once felt for Ryota. Ryota’s obvious love for his son, despite his foibles, is obvious and well played.

As their lives converge, because of the coming storm, there is a rekindled hope within Ryota that he may be able to get his family back. Their night together allows us to seen into each, permitting us to really get to know them all. It is a family I am comfortable to be with. That says a lot for the ability of the filmmaker.