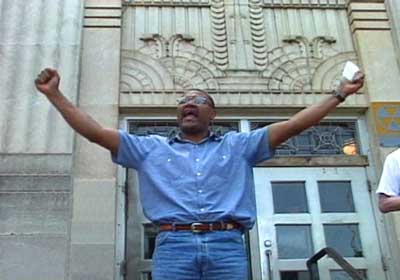 There’s an old saying that only innocent people are in prison – just ask any member of the inmate population in any jail. But, like it or not, there are hundreds, maybe thousands, of truly innocent people sentenced to life – and, sometimes, death – for crimes they did not commit. Filmmaker Jessica Sanders tells the story of eight such men exonerated for their crimes via DNA testing, testing not readily available when they were convicted, in “After Innocence.”

In 1993, Barry Scheck appeared on "The Phil Donahue Show" to discuss the use of forensic DNA. That show was seen by many inmates who had all but given up hope of overturning unjust sentences. Writer/director Jessica Sanders takes a heartbreaking and infuriating look at the further injustices seven of these men face "After Innocence." Vincent Moto was a young father in Philadelphia who waited while a young woman who accused him as her rapist five months earlier went and got the police. After serving over ten years for the crime, Vincent was exonerated, but, as he explains, job applications ask about convictions, not wrongful convictions, and the state of Pennsylvania requested a fee of six thousand dollars he did not have to expunge his record. Nicholas Yarris spent twenty-three years on death row and now feels like a ghost in his own neighborhood. After breathing refiltered air for all that time, Yarris finds breathing the fresh variety difficult. Wilmot Dedge bears an uncanny resemblance to the composite drawing made from a rape victim's description, but she also described her attacker as six feet tall and 160 pounds, muscular enough to throw her around. Dedge is 5'5" and 125 pounds but was convicted to two life sentences in Florida. Even after the Innocence Project proved him demonstrably innocent with DNA evidence, Dedge added another three years behind bars to the twenty-two already served because the prosecuting attorney insisted on upholding the law governing post-conviction access to DNA testing (Dedge got access earlier than the law allowed). Scott Hornoff was a Rhode Island police officer when he was convicted for the first degree murder of a woman he had had an affair with. Now that the real murderer has confessed and Hornoff is free after 6.5 years in jail, he is fighting the City of Warwick to be reinstated in the police force and receive back pay. As Peter Neufeld, who in 2000 founded the nonprofit legal clinic "The Innocence Project" with Barry Scheck, says to a group of exonerated ex-cons, the media gives these triumphant men thirty minutes of fame, then walks away. The far more shocking thing is that so, apparently, do most of the states which wronged them. Dennis Maher received compensation from the State of Massachusetts two years after being freed from a case of mistaken identity, but Massachusetts is only the eighteenth state in the nation to have passed compensation legislation for these cases. While parolees receive health care, career counseling and other forms of support, Vincent Motto was given $5.75 and a see you later. Then there are the lost benefits which are more difficult to quantify, such as Motto's contention that the years he spent behind bars, his early twenties, are the years in which most people establish their careers. Maher yearns for a family but says most women are now afraid of him (he has since gotten engaged and had a child). And it is not only the accused themselves who suffer, but their families. Not only do parents lose access to children, wives to husbands and children to fathers, but the families often bear financial burdens. Motto's parents, for example, spent $150,000 of their retirement money on his lawyer fees. Yet the seven men Sanders has profiled all remain incredibly positive, given their circumstances. Calvin Willis, who lost twenty-two years in Shreveport, Louisiana, tells his Church assembly that 'anger is stagnating.' The most extraordinary aftermath of any of these stories is that of Ronald Cotton, who has actually become friends with Jennifer Thompson, the North Carolina housewife whose first person account put him behind bars for rape. The two now embark on speaking engagements about the dangers of relying on eyewitness testimony. "After Innocence" is not only a compelling documentary and a real education for its audience, it is the type of work that should inspire social reform. After learning of serious problems with his state's capital punishment system, Governor George Ryan of Illinois, who is briefly featured here, not only ordered an extensive study, but learned from it, pardoning four death row inmates and commuting the sentences of all the rest to life. (Ryan is also the subject of the related documentary, "Deadline." "After Innocence" is one of fifteen documentaries shortlisted for the 2005 Oscar for Best Documentary.)

In 1993, Barry Scheck and Peter Neufeld, of the advocacy group Project Innocence, appeared on the Phil Donahue Show to discuss DNA testing that could effectively be used to prove, beyond a doubt, the innocence of some convicted criminals. Eight men, one who served 23 years on Death Row, are the subjects of Sanders and company’s camera as the stories are told of their imprisonment, eventual exoneration, freedom and the trials they faced after. Only 18 states have compensation legislation in place to provide remuneration to the wrongfully accused. The typical exonerees leave prison with the paltry bit of money they earned while incarcerated and little else. In contrast, a parolee, convicted of a crime, has access, in many cases, to health care, jobs training and more. This makes “After Innocence” a double prong of social awareness as Sanders examines both the necessity to provide DNA testing to right those societal and judicial wrongs that imprison the innocent and the ethical treatment of these people after their release. The eight men that make up the subject matter of After Innocence” are from many walks of life, counting a police officer, a career army sergeant and a young father in their number. The men lost their liberty for a variety of reasons from circumstantial forensic evidence, false confessions and bad lawyering to simple mistaken ID. Like the rest of the prison populations, their adamant denials of guilt fall on deaf ears until the prospect of DNA examination changed everything. Since the introduction of DNA testing of evidence, hundreds of wrongfully accused have been freed. But, the process can be painfully slow, taking years to set the innocent free. Sanders tells about these men arrested and convicted with sentences ranging from 12 to 24 years to life to death. Nicholas Yarris was sentenced to Death Row for murder, rape and abduction and server 21 years before his long struggle to submit to DNA testing finally freed him. Calvin Willis served 22-years for rape. Wilton Dedge lost his freedom for 22 years on the evidence that a hair sample at the crime scene could not discount him as a suspect. The eyewitness testified that her assailant was tall and muscular. Dedge, at the time of the crime, was 5’5” and 125 pounds. The other lives documented in “After Innocence” – Herman Atkins (13 years wrongfully imprisoned), Dennis Maher (19 years), Vincent Moto (10.5 years), Ronald Cotton (11 years. Sanders brings Cotton together with Jennifer Thompson-Canino, the woman whose testimony put him behind bars (Thompson-Canino became an activist fighting witness mistaken identification)) and police officer Scott Hornoff (6.5 years) – are given equal shrift with each case reinforcing both advocacy for genetic testing in capital and other crimes and repeal of the barbarity and finality of the death penalty. (Exiting Illinois Governor George Ryan, two days before leaving office, commuted the death penalty for all 171 Death Row inmates. His decision was based on the knowledge that as many as 60% of the state’s inmates may be innocent.) Jennifer Sanders builds a solid foundation in making the point that, sometimes, our system of justice does the wrong thing, no matter how well meaning. Maybe all convicted and imprisoned criminals are, indeed, innocent or maybe not. But “After Innocence” proves beyond a shadow of a doubt that some are not guilty and everything that can be done to free them should be done. The documentary opens one’s eyes and, hopefully, one’s mind.