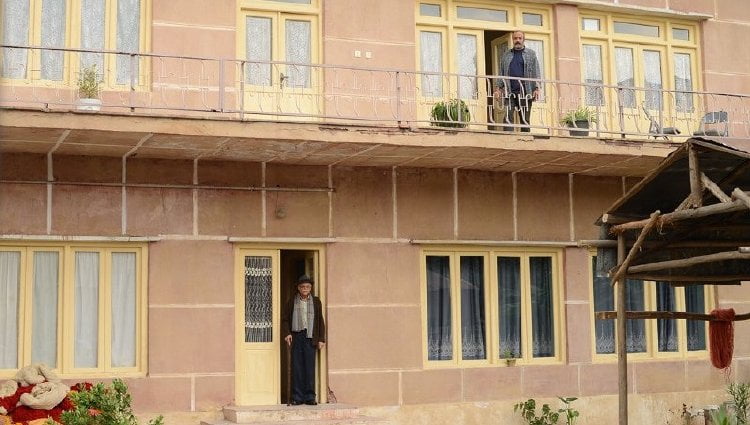 When Shokoo (Fatemeh Motamed Arya) learns her daughter Shahla plans to put her ex-husband Fereydoun (Reza Babak) in a nursing home to convalesce, she steps in, having gotten her current husband Reza (Saeed Aghakhani) to agree to the ‘good deed.’  But Fereydoun refuses to talk and when Reza learns their town’s baker knows about the arrangement he begins to sulk.  It comes as a surprise to learn Reza was once a good friend of Fereydoun’s and it is that brotherhood that restores peace in the household in “African Violet.”

Director Mona Zandi Haghighi tells a story based on her own aunt (screenplay by Hamidreza Bababeigi) with humor, compassion and a phenomenal eye for color.  The film is both enormously entertaining, Arya and Aghakhani enjoying flirtatious chemistry, and artistic, its upstairs/downstairs production design encompassing a household courtyard where Shokoo’s yarn dying business introduces bright bursts of color while costume designer Ali Abedini coordinates subtler spectrums.

Ensconced in a downstairs bedroom, Fereydoun is the first of the household’s men to sulk, even going so far as to wait for Shokoo to serve him at the dinner table before rejecting her meal and shuffling off to his room.  But when he has a bed wetting accident, it is Reza who comes to his rescue, the two conspiring to keep the secret from Shokoo (Reza’s attempts at clean-up are downright hilarious).

Eventually, the reserved, dapper first husband expresses his hurt, claiming Shokoo ran off with his friend.  She sets him straight.  Meanwhile the burly Reza begins to express himself more, wooing his wife with laughter and song.  There is a lovely subplot involving the couple’s niece, Fereshteh (Neda Jebraeili), who confides in Shokoo before running away, leaving her single mother Soraya (Roya Javidnia) distraught, a situation Fereydoun witnesses and sympathizes with.  He makes a proposal to Shokoo which has an interesting effect on her, one which Haghighi fails to resolve, the film’s one frustration.

Director of photography Farhad Saba captures all the film’s colors, from the vibrancy of the dyes to the delicacy of the titular flowers.  The use of color in this film not only recalls Zhang Yimou’s “Ju Dou,” but, extraordinarily, 2021’s two colors of the year, reflected in the interior of Shokoo and Reza’s home.  Arya is riveting, exuding a sexy sensuality even covered in fabric, her feet shod in thick socks and sandals.  Aghakhani adds the comical playfulness that makes the film sing.

Shokoo is living a contented life with her second husband, Reza, when she discovers that her step children have put their father, her first husband, Fereydoun (Reza Babak), in a nursing home. She decides to take her ex into own her home and care for him, much to the chagrin of husband number two, in “African Violet.”

I had doubts about this odd not-exactly-romantic triangle of lives thrust together by the willful Shokoo’s decision. You meet her as she arranges to stop her former husband’s children’s plans and spirit Fereydoun to her home. There, a life of sorts begins for the unusual trio. The doubt I had, early on, is due to the foreign, to me, concept of taking responsibility for others no longer your own. I got over this hesitation pretty quickly as the fine actors ply their trade.

The pleasure of “African Violet” is in the interactions between the three inhabitants of the house. There are actually several relationships going on here. We have the one between Shokoo and Reza as they grapple with her unilateral decision to upset their lives. Then, there is what becomes an odd couple synergy between Reza and Mr. F as they morph into secret allies in their plot to keep things, guy things, away for Shokoo. Also, there is the strange relationship between and her ex and, finally, the dynamics of the triangle’s interrelations.

Sophomore director and first-time co-scribe Mona Zandi Haqiqi, with Hamidreza Bababeygi, makes this unusual little tale draw the viewer in with its fully developed, three-dimensional characters. Each feels like a real person and the dynamics of their actions and reactions are often amusing and always poignant. While part of the Iranian film fest, “African Violet” transcends its country’s borders.

"African Violet" is one of the featured selections of The Department of Time and Space's virtual Festival of Films from Iran running 1/22-2/7/2021.  Click here for more information and tickets.