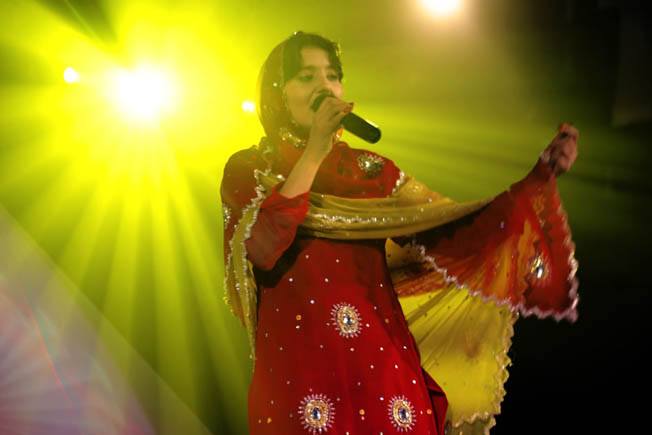 Everyone wants to be a star and this is no different in a country that has suffered civil war, Soviet invasion and Taliban oppression for decades. After the American intervention following 9/11, Tilo TV took a page from our own “American Idol” and scoured the land to find contestants who want to sing and become an “Afghan Star.”

For thirty years under Taliban rule, television screens were black and singing was deemed sacrilegious and forbidden in Afghanistan. Now the country's first televised talent show has drawn two thousand contestants of all ages and ethnicities, including three women, two of whom make it to the top ten of "Afghan Star." Winner of the 2009 Sundance World documentary awards for Best Film and Best Director, "Afghan Star" sounds like an entertaining look at a low rent version of "American Idol," but Havana Marking has proven very savvy in her choice of subject as its popularity in its native land proves both a galvanizing unifier and a lightning rod of conflict. Marking follows four contestants for the three months leading up to "Afghan Star's" finale and, while there are some amusing parallels to "American Idol," it is also clear Glambert would risk stoning had he been performing in Afghanistan. Producer/host Daoud is from Kabul, where he believes there is more freedom than in other parts of the country. He explains how not only is Afghanistan itself split into various ethnic groups, but even his home city is split five or six ways. 'It is rare that a Pashtun supports a Hazara except in *this* show.' Afghan Star viewers are also practicing democracy by voting with their cell phones and some rabid fans mount campaigns by purchasing thousands of SIM cards. But the show is also drawing severe criticism from religious leaders who decry its Western influences and immorality (men and women together!). The Taliban threatens local phone companies. Yet Daoud counters that music used to be a part of Afghanistan's past. Marking has unearthed an amazing bit of video of a 1980's Afghani New Wave band fronted by a woman to prove not only his point, but to show how backwards the country has become in ensuing years. The four contestants we follow are very different. Rafi from Mazar e Sharif is slick, has Hollywood looks and loads of female fans. It is odd to see Burqa wearing women shooting snaps of him on their cell phones when he appears in public. When asked about the vote, Rafi contends that 'people just want a good voice,' an irony when his is compared to classically trained Hazara singer Hameed's. Twenty-five year-old Lima is from Kandahar, the country's most religious area, and is taking quite a bold risk to compete for the $5,000 prize money while twenty-one year-old Setara dreams of becoming a famous pop star. The heavily made up Setara dares to dance on stage, her head scarf slipping down, and she is accused of being a whore and receives death threats. The show itself, while obviously modeled on Idol, has low production values and host Daoud doesn't torture his contestants like Ryan Seacrest does, but as the show counts down a real suspense is built. Fans go crazy, glued to televisions on Friday night. One young woman demonstrates how to build a TV aerial with wire and rocks. The international press descends to cover the mounting hysteria. After the winner is announced, Marking provides updates on her four that prove more surprising than the show's final outcome. "Afghan Star" is a winner of its own, a complex look at a country scrambling out of the dark ages.