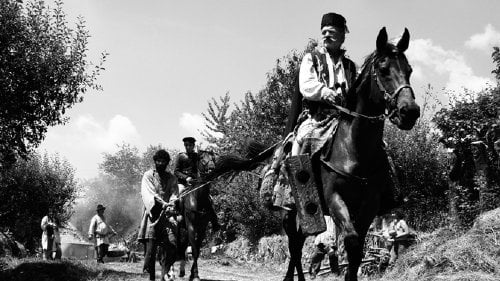 After the Russian-Turkish war, in 1835, Wallachia is an unsettled land, a collision of religions and cultures. A gendarme, Costandin (Teodor Corban, "12:08 East of Bucharest"), travels with his teenaged son Ionita (Mihai Comanoiu), mandated by Boyar Iordache Cîndescu (theater director Alexandru Dabija) to return gypsy slave Carfin (Cuzin Toma, "Aurora") who ran away after being threatened with death for having sex with his wife in "Aferim!"

The Romanian New Wave which began in the 2000's has explored the country's recent past, but this 2015 Berlin Silver Bear winner for Best Director is quite different, a period piece exploring the enslavement of the Roma people, more commonly known as gypsies, a people still marginalized today. Although he's taking on a complex historical time, cowriter (with Florin Lazarescu)/director Radu Jude has made a very entertaining film, Costandin always at the ready with laugh out loud, often raunchy folk sayings. Marius Panduru ("Police, Adjective"), shooting long takes in b&w 35mm, achieves the illusion of a mittel-European Western rediscovered decades after its release. Beginning with a symbolic low shot of thistles piercing the sky, "Aferim!" finds Costandin and Ionita already begun their journey. Questioning those they meet along the way, their first tip is that Carfin left the monastery he had hidden in to find more freedom with the gypsy gold panners in the forest. 'Here is how you score the crows,' father advises son using the derogatory slur of the time, 'a good butcher isn't afraid of thousands and thousands of sheep.' Ionita spies a priest (Alexandru Bindea) with a broken cart along the road, drawing his father's distrust ('The devil flocks around priests.'), but the younger, more compassionate teen stops to help him, only to be treated to a misanthropic soliloquy on the failings of every ethnicity he's encountered. It's funny stuff, but also very telling, particularly a diatribe on the 'Giant Jews' the priest recounts as Biblical fact. After their earlier tip doesn't pan out, they continue outside their district, bribing another gendarme to allow them to hunt their prey. He tells them Carfin is at the home of a basketweaver. The man (Victor Rebengiuc) and his wife (Luminita Gheorghiu, "The Death of Mr. Lazarescu") plead ignorance and their own poverty, but Costandin first finds Tintiric (Alberto Dinache), a young gypsy, then the man they've been looking for. With Carfin slung over the front of Costandin's horse, his feet bound, they begin their journey back, Carfin describing how the boyar's wife Sultana (Mihaela Sîrbu) sexually accosted him. They stop at a fair to sell Tintiric and a boisterous inn where Costandin buys Ionita the services of a prostitute. Carfin's chatter about travels to Leipzig, Vienna and Paris, where slaves are not beaten, softens the two men. Ionita begs his father to ask the boyar for leniency as Carfin is innocent. The character of Costandin gives us a unique view into a past still reverberating in the present. He's a man who accepting of his lot in life, even his death a necessity for his son's future, one he insists will be better with a commission in the army. He is often cruel, using his 'power' as his status warrants, but Ionita, and then Carfin himself, have their effect, and, after interviewing the repressed Sultana, he attempts diplomacy with the much more powerful boyar. His achievement is a double-edged sword. "Aferim!" may be foreign in its time and place, but its truths are universal. That Jude is able to make us laugh in the telling ('In the ass of the humble, the devil sits cross-legged.') is an achievement unto itself. Grade: