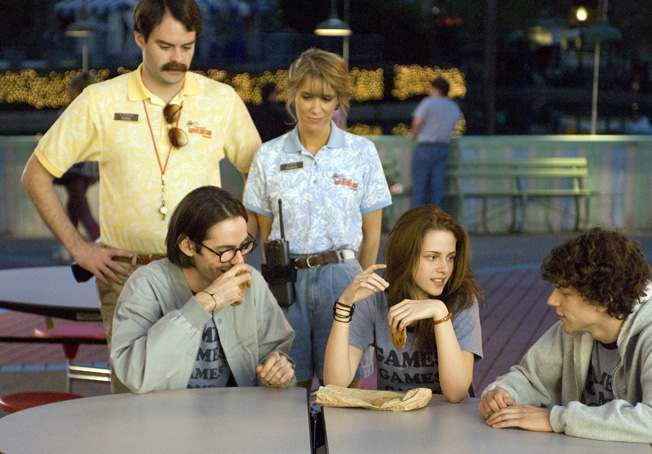 It's 1987. James Brennan (Jesse Eisenberg, "The Squid and the Whale") has just graduated from college and is looking forward to his long planned European trip with weed buddy Eric (Michael Zegen), but mom (Wendie Malick, TV's "Just Shoot Me") and dad (Jack Gilpin, "The Life Before Her Eyes," "21") are caught by the economy and must withdraw the financial gift that was going to pay his way. After trying every other route imaginable, James is forced to take what everyone in town considers the worst of summer jobs - a gig at a game booth in "Adventureland."

Writer/director Greg Mottola ("The Daytrippers"), helmer of teen high school to college transition comedy "Superbad," takes a page from his own life to observe the tougher change that occurs between college and real life. A mid-80's Pennsylvania amusement park whose owners threaten employees who would dare to award one of their last stuffed giant pandas is gawdy entertainment for the townie crowd but a weird parallel society for those who work there. James is a rarity - a virgin who's not in any real hurry to change his status. But when he meets the mysteriously melancholy Em (Kristen Stewart, "Twilight"), he realizes she may be the one he's been waiting for. There's a problem, though, with this budding romance. Unbeknownst to everyone else, Em has been having an affair with the married park mechanic Mike Connell (Ryan Reynolds, "Definitely, Maybe"), a legend about town for his having once jammed with Lou Reed. James looks up to Connell - he's a cool guy whose band plays around town and who seems to have his act together. Connell, in the meantime, plays a wary game of advisor to James while still meeting Em in his mom's basement. Even though the teenage love story is "Adventureland's" core, it is by no means all there is too it. When James doesn't get his requested gig of running a ride and is relegated to a Horse derby booth, he's mentored by Joel (Martin Starr, "Superbad," "The Incredible Hulk"), a pipe smoking, Russian lit lover with no luck with the ladies. Joel shares an intellectual wit with Em, making them a threesome of friends that are pleasant to hang around with. Then there's James's childhood best friend Tommy Frigo (Matt Bush), who still thinks it's cool to express affection with a kick to the nads. The reappearance of Lisa P (Margarita Levieva, 2007's "Noise"), Catholic girl sex bomb and the female Connell in desirability factor, shakes things up when she recognizes the value of the nice guy that James is. What Mottola's really looking at here is whether a romance can survive a very big mistake and how learning big lessons the hard way at an early age provides one with a greater resilience to rebound, no matter how bleak things may look at the time. In order to make this grungy environment and its motley crew of characters sing, casting was crucial and despite some cartoonish behavior from the 'adults' (Heder, Wiig, Malick and Gilpin), you never get the impression you are watching anything but real people. Eisenberg's a good young actor who can make intelligence and decency sexy (it's not a stretch that the park hotty wants to date him) and Steward has that sleepy quality (those smudged eyes against that pale skin) which makes one want to rouse her. Martin Starr is an offbeat second banana, smart but vulnerable and always entertaining and Paige Howard (daughter of Ron, younger sister of Bryce Dallas) is hilarious inadvertently seducing him and quite believable dumping him. Ryan Reynolds contributes quite a bit to the film's tone as the golden boy who is quickly losing his luster. His last exchange with Eisenberg tells a whole story. As Em's father and stepmother, Josh Pais ("Teeth," "Year of the Dog") and Mary Birdsong (TV's "Reno 911!") are more realistic than the Brennan's in a surreal nightmarish kind of way. Heder and Wiig are like the film's running deadpan comedy commentary. Mottola goes a bit overboard describing James's job at "Adventureland" as the job from hell - see "Fast Food Nation" just for starters to get a real sense of hell - but the run down park isn't a bad metaphor for real life where the deck is stacked against you (see 'Hats Off to Larry'). The 1980's are well served by the soundtrack which features David Bowie, The Replacements, The Cure, and, most pointedly, Falco's "Rock Me Amadeus" and Lou Reed's "Satellite of Love." A Foreigner tribute band playing at the local dive must be heard to be believed. "Adventureland" doesn't take the easy or expected road, but the coda offers a road towards the rest of the journey that has been freshly paved for the weary traveler. This is a rocky romance that rings true.