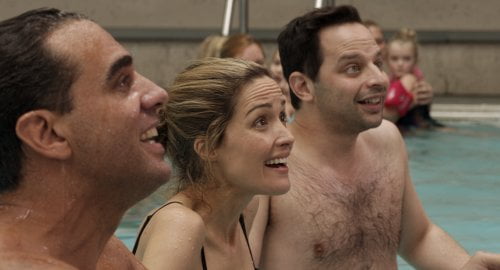 When Jake's (Nick Kroll, TV's 'Kroll Show,' 'Parks and Recreation,' 'Children's Hospital') Google Glass-like Mind's i project crashes and burns along with all its seed capital, he becomes one of the most unpopular guys in New York City. Licking his wounds, Jake returns to his home town hoping to veg at his sister Justine's (Rose Byrne) house. But the harried working mother of a three year-old insists Jake sing for his supper and so he takes on the role of manny for his nephew Teddy (the insipid Caleb and Matthew Paddock) in "Adult Beginners."

Sparked by a story by producer/star Kroll (written by Jeff Cox ("Blades of Glory") and Liz Flahive (Showtime's 'Nurse Jackie')), "Adult Beginners" has the misfortune of being an awful lot like last year's Sundance hit "The Skeleton Twins" without nearly as many laughs. Director Ross Katz (HBO's 'Taking Chance') achieves a nice, crisp look for a film that's so forgettable it'll be a distant memory before you've hit the theater lobby. Don't let the opening credit roll fool you - if it looks like a who's who of stand-up and indie talent, most of Kroll's pals are in blink and you'll miss them cameos, despite prominent billing (that means you Mike Birbiglia and Caitlin FitzGerald - at least Joel McHale has two whole scenes). Once we get to suburban New York, the "Skeleton" similarities begin to pile up - a brother at the end of his tether finds his sister in similar straits; his easy going brother-in-law Danny (Bobby Cannavale) is having an affair; his sister behaves inappropriately at work; the local bar features prominently as does a public swimming pool. The siblings will, of course, help set each other straight while repairing their relationship. Initially, Kroll's child minding skills are good for a chuckle or two, as is his run in with an old high school classmate (SNL's Bobby Moynihan), but the aqua baby class that provides the film its title is run by '30 Rock's' Jane Krakowski in a thoroughly annoying performance used to showcase her pipes over her breaststroke. If one's distracted trying to figure out how Kroll and Byrne could have come from the same gene pool, there's always the abruptly changing seasons to distract one even more. "Adult Beginners" isn't necessarily a bad film, it's just an entirely unnecessary one. Just because digital filmmaking has opened more doors doesn't mean every idea is worth committing to pixels. Grade: