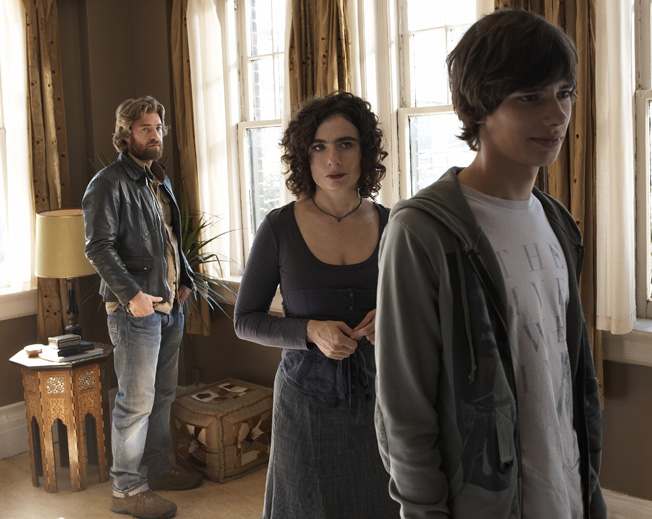 Simon (Devon Bostick, "George A. Romero's Land of the Dead," "Saw IV") is an orphaned high school student being raised by his uncle Tom (Scott Speedman, "The Strangers") in the house he grew up in. When his French teacher uses the story of a terrorist who sent his own pregnant fiancee onto a plane with a bomb for a translation exercise, Simon writes it from the perspective of the unborn child. Sabine (Arsinée Khanjian, "Fat Girl," "Where the Truth Lies") also teaches drama, and convinces Simon to read his story to the class as truth which begins all sorts of debate as well as helping Simon work out his own mysterious family history in "Adoration." "Adoration," the title of which refers to a son's love of his mother, a woman's love of her husband and the Magi visiting the infant Jesus, is the epitome of an Atom Egoyan movie, with its themes of technological influences on human communication and finding the truth amidst family secrets. With its fatal bus accident, it seems a post 9/11 response to "The Sweet Hereafter" as well. "Adoration" is a well made film that holds no surprises and verges on the pretentious. Without its shifting time line construction, it would hold little interest. A somber violin accompanies a tracking shot of a grassy hill upon which stand modern apartment buildings. A teenaged boy sits with his laptop before the music lightens and the scene shifts to a beautiful blond playing at the end of a lake dock. This is the mother, Rachel (Rachel Blanchard, "Where the Truth Lies," "Snakes on a Plane"), who Simon now imagines as the unsuspecting wife of a terrorist. His memory accompanies a visit to the home of his wealthy grandfather Morris (Kenneth Welsh, "The Exorcism of Emily Rose," HBO's "Grey Gardens") when Simon was much younger. Just this past spring, he has recorded his grandfather on his death bed. After reading his fictional story in class, he joins his usual webcam conference that evening where his friends are discussing the matter (some side with the father, most not, others suggest their ideals may seem just as warped to 'them' as 'theirs' do to us, etc.) and explains that he just learned the truth a few months ago himself. He shows his friends video of his grandfather proclaiming his father a killer. Meanwhile, life with Tom, the black sheep brother to mother Rachel, has become financially and emotionally strained. As Simon helps Tom erect the family's nativity panels outside, a bourka wearing stranger (clearly Sabine) stops to discuss it, but Tom asks her to leave his property. Tom cannot answer Simon's questions about his father, nor can he explain just what led his mother to replace the scroll of her violin with an antique one provided by Sami (Noam Jenkins, "Saw II," "Saw IV") when they met, but Tom is now requesting Simon's permission to sell the violin to make ends meet. Flashbacks to Rachel and Sami show their meeting, a lovemaking session where he explains why he cannot fly with her to Bethlehem to meet his family and, gradually, what followed that memory of Rachel playing violin. Egoyan has structured "Adoration" so that we learn just a little more about Rachel and Sami's truth as Simon discovers it. It is possible that all of their flashbacks are truth, but by extending and resetting them, implications change. Tom, his father and Sabine herself all have parts to play in forming the truth Simon finally finds. Simon's terrorist story is actually but a subplot and a means to this truth, even as Egoyan uses it to comment upon victimhood and religious and philosophical differences. At times he is a bit heavy handed. Kenneth Walsh, who plays grandfather, could have come from Nazi central casting. The nativity symbolism is laid on a bit thick (there are three 'gifts' spoken about, it ends up an outward manifestation of religious hypocrisy, etc.). Sabine's actions work for the plot but not always as realistic character motivation. The film is well acted with young Bostick proving himself more capable than his filmography would suggest. Khanjian shoulders a perplexing character, self-described as a bit crazy, as well as possible. Speedman underplays nicely. Blanchard projects the saintly innocence the story demands while Jenkins walks the fine line that allows his character to be interpreted as it is edited into the flashback structure. Egoyan regular Maury Chaykin has a cameo as a damaged 'survivor' of the plane that never blew up. Dominic Cuzzocrea ("The Tracey Fragments") has a memorably quirky scene as a cab driver caught in the middle of a weird situation. The production is modest, favoring dark, tasteful interiors. Mychael Danna's ("Lakeview Terrace") score is appropriately mournful. Web conferencing, phone recording and even instant photographs aid in developing truth from a lie, but in the end it's implied memory that seals the deal. "Adoration" is a carefully constructed house of cards, deconstructed.