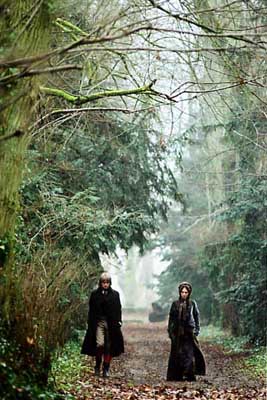 At the turn of the nineteenth century a young highway engineer, Adolphe (Stanislas Merhar, "Almost Peaceful," "Merci Docteur Rey"), decides it will increase his cachet to take a mistress, so he alights on a woman he thinks will be an easy target. Ellénore (Isabelle Adjani, "Bon Voyage," "Monsieur Ibrahim") is a simple woman, a decade older than he, who is already the mistress of The Count (Jean Yanne, "Brotherhood of the Wolf"), by whom she has two children. But the young man, whose passion is mostly artifice, has chosen a woman whose love for him will become an all-consuming obsession, destroying everything for "Adolphe."

Director Benoît Jacquot has delved into amour fou ("À tout de suite"), the older woman/younger man dynamic ("The School of Flesh") and the period piece ("Sade") before, but his adaptation of "Adolphe" is a moribund affair. For the great beauty, Isabelle Adjani, the film may make one wonder why she has not appeared to age one day in the past three decades, but her performance here is both a retread in character of 1975's "The Story of Adele H" and of the silent film acting technique of Herzog's "Nosferatu," debilitating handicaps thirty years later in this film. Ellénore, who believes that a woman should exist to care for husband's home and children, becomes so besotted with Adolphe during the Count's absence that he cannot but notice and demands she no longer see the young man. In response she leaves both her security and her children, besmirching her reputation beyond forgiveness with her former social set. Adolphe, whose father (Jean-Marc Stehlé, "Queen Margot," "Bon voyage") has demanded he return to Paris, vacillates between giving in to her pleas to stay and high-tailing it back to freedom. The lovers words become barbed with guilt and accusations, their letters deliver hurtful truths. And yet, Adolphe cannot seem to quit himself of the soul-sucking relationship, eventually travelling with Ellénore to Poland where she stands to inherit a fortune from her father. While some of the truisms couched in the dialogue ('I rested in the indifference of others, exhausted by her love') surely boast the artful writing of the original Benjamin Constant novel, Adolphe's continual cycle of desiring his lover only when she is denied him, then rejecting her becomes wearisome quickly. Stanislas Merhar cuts a dashing figure, but he never gains our sympathy painting a confusing portrait when his false expressions of love often seem too much the real thing. Adjani is simply awful in this role, wearing perhaps all of two facial expressions throughout - pathetic yearning and fatigued madness - no wait, that was the same one. But one cannot help but be in awe of her gorgeous, youthful appearance. The production, however, is sumptuously photographed by Benoît Delhomme ("Sade," "The Proposition") in breathtaking landscapes, sprawling country estates and Adolphe's stuffy but luxurious Parisian bedroom. Costume is equally breathtaking and the production culminates in a snowy Polish scene which could be right out of "Doctor Zhivago." It should also be noted, however, that "Adolphe" frequently suffers from the subtitling blight of white words over white backgrounds, most notably during the reading of Ellénore's final, forbidden letter to Adolphe. The romantic music of Robert Schumann is ironically suitable for this tale which has more to do with selfishness than real romantic love. "Adolphe" may be the thing to make twelve year old girls swoon, but despite its surface beauty, it tells a tiresome tale.

Adolphe” is a pretty to look at film that utilizes exquisite costume and production design but suffers from two things: its uncompelling story of confused love and the wooden performances by Isabelle Adjani and Stanislas Merhar as Ellenore and the title character, Adolphe. Adjani (who barely seems to have aged since she played Lucy in Werner Herzog’s 1979 horror classic, “Nosferatu”) is lovely to look at and wears her luxurious costumes beautifully but does nothing to make her character sympathetic. Merhar is, in a word, dull. The young actor plays Adolphe as selfish and wishy-washy as he moves between fits of passion for Ellenore and rejection of her. By the time the credits rolled for “Adolphe” I seriously wanted it to be over and done. Helmer Benoit Jacquot shows skill in creating a believable period setting but does not show the same expertise in evincing sympathetic performances from his stars. This latter aspect of the film may well be due to Adjani and Merhar, though, since the other supporting performances in “Adolphe” do garner interest. Adjani’s acting” bounces between a look of bewilderment to, well, a look of bewilderment. Merhar simply looks constipated throughout the film. Adolphe” is a case of style over substance as we are presented with a marvelous looking film, shot well by Benoit Delhomme and elegantly costumed by Catherine Bouchard. The story, by the director and Fabrice Roger-Lacan (from the novel by Benjamin Constant), is a meandering tale of the torrid love affair between Ellenore and the much younger Adolphe. This on-again-off-again romance does nothing to make either character attractive emotionally to the viewer and makes for an extremely long movie even at only 102 minutes.