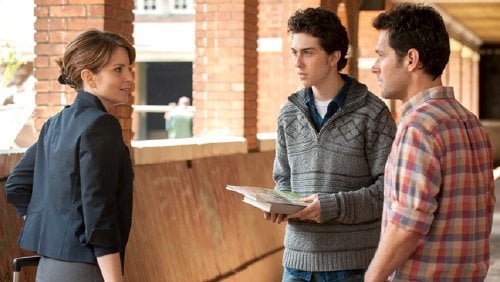 Princeton admissions officer Portia Nathan (Tina Fey) is very happy with her life shared with English professor Mark (Michael Sheen, following his "Midnight in Paris" role as another cheating academic) and believes it could become even better when her boss, Dean of Admissions Clarence (Wallace Shawn, "The Princess Bride"), tells her and her only rival, Corinne (Gloria Reuben, "Lincoln"), of his imminent retirement. But a kink is thrown into the machine when she hears from an old Dartmouth classmate, John Pressman (Paul Rudd), who begs her to visit his fledgling progressive, developmental high school New Quest. John's hell bent on promoting an unusual student, Jeremiah Balakian (Nat Wolff, "Peace, Love, & Misunderstanding"), and so, too, is Portia after he tells her a surprising secret in "Admission."

It would appear that director Paul Weitz ("About a Boy," "Being Flynn") is aiming for something known as a 'heart felt comedy,' but despite a solid cast, "Admission," adapted from Jean Hanff Korelitz's novel by Karen Croner ("One True Thing"), isn't Ivy League. Fresh off her mildly disappointing '30 Rock' finale, Tina Fey is in her comfort zone as a nerdy career woman who is uncomfortable around children, yet strives to develop the futures of those who engage her imagination on paper and it is telling that the film is most interesting during scenes that illustrate what it's like to have her job. But "Admission" isn't really what one would call a work comedy, either. It belongs to that genre of 'family' movies where families aren't defined by biology. Portia has a prickly relationship with her mom, Susannah (Lily Tomlin, "A Prairie Home Companion"), a self sufficient feminist proud of having a daughter without a man; John's a single dad, having adopted Nelson (Travaris Spears) during an African Peace Corp trip and Clarence finds himself an unexpectedly expectant dad with his lover Helen (Sonya Walger, TV's 'Lost'). Portia and John even deliver a calf together. But there's more warmth than sizzle between Fey and Rudd and the film is neither fish nor fowl - it should have been much funnier or much edgier. Like Fey, Weitz seems content not rocking the boat and ends up scuttling it. "Admission" is blandly pleasant, at least until the competition for getting favored students admitted heats up. The supporting cast are more fun to be around that the stars. Wolff and Spears are naturals, both radiating intelligence in entirely different ways. Sheen, who was also one of Liz Lemon's amours on '30 Rock,' is funny just to look at with his professorial perm. Tomlin is briskly matter of fact and gets to indulge in a flirtation of her own with Olek Krupa's ("Salt") Polokov. Gloria Reuben is far more intriguing than the average movie office rival. Maybe she should pitch a television spinoff for Corinne.