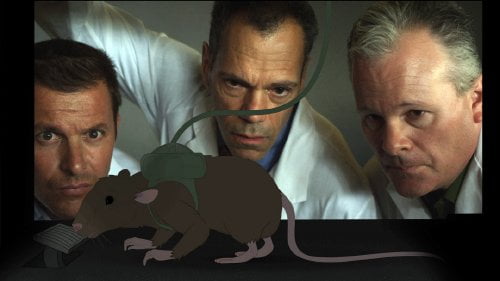 The big tobacco companies produce the most deadly and addictive product on earth and have achieved a stellar record holding off government control of their business. That is until one man, Victor DeNoble, blows the whistle on “Addiction Incorporated.”

DeNoble is a very effervescent subject and Evans keeps his film percolating along with animations, historical backgrounds, lab experiment documentation and jaw dropping congressional hearings. DeNoble's findings were what were at the heart of that '60 Minutes' story featured in the feature film "The Insider," but while the story has been out there, it is still fascinating to learn about in all its detail. Unfortunately, the film begins to bog down in its last act and turns into more of a typical talking head doc, nowhere near as engaging as the early goings.

The big tobacco companies produce the most deadly and addictive product on earth and have achieved a stellar record holding off government regulation of their business. That is, until 1994 when one man, Victor DeNoble, blew the whistle on “Addiction Incorporated.” This is a well-researched and straightforward documentary film debut for filmmaker Charles Evans Jr. The focus of the film is on Victor DeNoble, a scientist at Philip Morris Corporation who discovers the link between tobacco and the addiction it causes in lab animals and, thus, human beings. The question the tobacco industry needed an answer for in the 1990s was: how do we make a product that kills fewer people but is more addictive to the user? DeNoble, and scientists like him, answered the question and were appalled when the big tobacco companies decided to keep it a secret. This is where “Addiction Incorporated” switches gears from the research to find a way to addict more and more people to DeNoble’s decision that enough is enough as he blows the whistle on his industry. Truthfully, the research portion is more interesting than the lengthy litigation it spawned. But, Victor DeNoble and his story is the real draw here and it is inspirational. He is a terrific interview subject with his clear articulation and knowledge. He has stood strong against the deep pocketed industry and became an educator who has educated and entertained over 300000 young people to tell about the dangers of smoking. “Addiction Incorporated” is a film that should be shown in high schools and colleges. Victor DeNoble is a great role model with something important to say. I hope people listen.