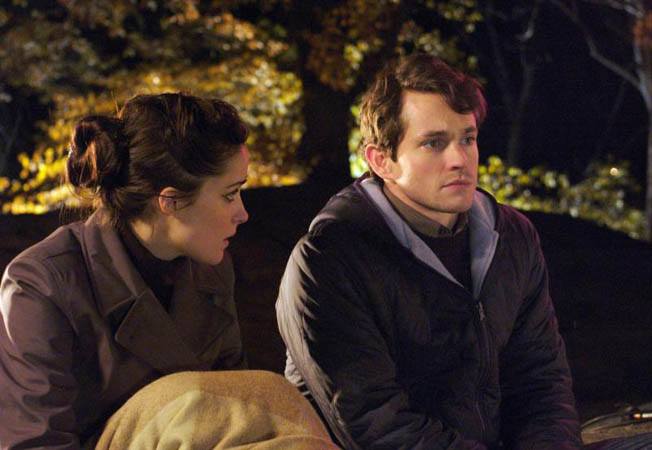 Beth Buchwald (Rose Byrne, "Knowing," TV's "Damages") meets her strange new neighbor while attempting to get into a basement storage area. She thinks he's cute, although he appears to be very socially awkward. After a passing remark which he takes literally, Beth is called into his apartment and astonished by its transformation into a planetarium. Later, he tells her, frankly, that he has Asperger's Syndrome, and Beth needs to figure out if she is up to trying for a relationship with "Adam."

Writer/director Max Mayer heard a radio show about Asperger's, a high-functioning form of Autism in which empathy is an alien concept, and thought there was a parallel to romantic relationships. Mayer and his lead, Hugh Dancy ("Ella Enchanted," "Confessions of a Shopaholic"), do a fine job conveying where an 'Aspie' is coming from, but Mayer's direction of his actors is weak with several scenes notable for off timing, amateurishness or staginess. Mayer also falls into cliche (the kindly Black man as protector, the female lead a schoolteacher, etc.) and a subplot involving Beth's father that has the sketchiest parallels to the main story line. Still, there is something to be said for introducing a character who is only capable of the bluntest of honesty into a romantic relationship. In some ways, "Adam" is reminiscent of 1979's "Tim" in which Piper Laurie hooks up with below-average intelligence laborer Mel Gibson (Adam is highly intelligent, but also at a disadvantage to a worldlier woman who is attracted to him and controls the relationship). After a voice over from Beth, a teacher and aspiring children's author, using "The Little Prince" as an analogy to the relationship we are about to observe, we are made privy to Adam's current state of affairs. His father, whom he has been living with in a high end New York City condo, has just passed away and Adam reacts stoically, removing his father's chore list from the refrigerator, continuing on with his nightly meals of macaroni and cheese and going to work at a toy company where he is an electrical engineer of intense focus. Beth is charmed but puzzled by the young man who neglects to offer to help her in any situation, but whom she finds dangling outside her apartment windows with a rag after mentioning she cannot see out of them. Once Beth understands Adam's condition, she begins to bring him into the outside world while he brings her into his, showing her 'secrets' like the raccoons who live in Central Park. Beth appears to be hiding Adam from her father Marty (Peter Gallagher, "To Gillian on Her 37th Birthday," "American Beauty") with whom she has a very tight relationship, and yet when Beth gets Adam out for a night of Off-Broadway theater, who should be there but Marty and mom Rebecca Buchwald (Amy Irving, "Bossa Nova," "Hide and Seek"). Adam stumbles through, reeling off the history of the theater, but angers Beth when he bluntly asks Marty whether he is guilty of the charges that Marty will be fighting in court. She apologizes later, just in time for Adam to see a note on her calendar about meeting her parents that evening. If there is one thing Adam cannot tolerate, it is a lie. "Adam" is a frustrating movie, because for every thing it does well, it seems to counter with something bad. After successfully establishing a baseline for Asperger's understanding, Mayer inserts a weak "Forrest Gump" joke to underline Adam's higher intelligence. Hot shot money man Marty is caught in a legal trap that exposes his feet of clay and causes a rift with Beth that has nothing to do with her relationship with Adam except to allow Rebecca's character to emerge as a nurturer and love proponent (something, it should be noted, Irving almost manages to put over despite the overt romanticism of her character's development). Dancy remains consistent throughout, but Byrne's timing begins to flag, making her performance unnatural at times. Then one notices an awkward party staging, where a semicircle is staged and conversation moves along in a line, about as natural as those three-sided family table meals used on television and one can only point to the director. Adam's relationship with his work and boss Sam Klieber (Mark Linn-Baker, TV's "Perfect Strangers") is well handled, Klieber constantly having to pull Adam out of deep focus with '1,000 for $5, not 5 for $1,000,' but when Adam lands his dream job, he may as well be in Disneyland his coworkers are so artificial. And yet, landing that job presents a climax that has been well thought out as regards the central relationship. The film ends on just the right note. Technically, the film is adequate.