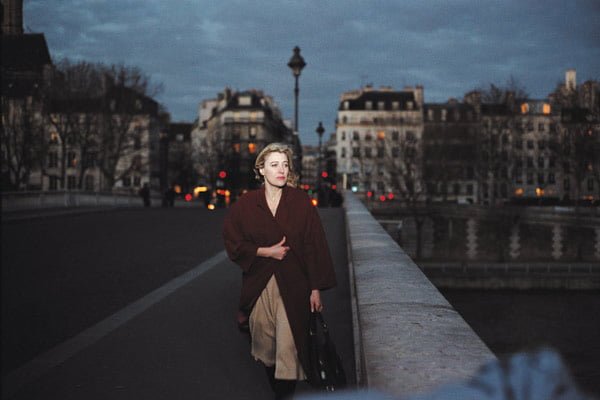 Actress Marcelline (Valeria Bruni-Tedeschi) is on the wrong side of 40, unmarried, childless and having a problem with her role as Natalia Petrovna in the Turgenyev play, “A Month in the Country.” With her biological clock ticking away and the change of life fast approaching, she vows that she will give up her fame and fortune to find the man of her life in Actresses.”

Cowriter/director/star Valeria Bruni Tedeschi ("Crustacés et coquillages," "Munich") does a terrific job with her portrayal of an actress who has trouble unraveling her life from her performance, but the setting she gives this gem doesn't show it off in its best light. In his second creepy perf of the MFA's 13th French Fest, Mathieu Amalric ("57,000 Km. Between Us) is solid as a tempermental director with dubious methods, but other characters are less well defined, keeping the film from coming into sharp focus.

Valeria Bruni Tedeschi does triple duty and the writer, director and star and took on a bit much with her story (co-scribed with Noemie Lvovsky and Agnes de Sacy) about one lady’s mid-life crisis. Marcelline is essentially selfish and, as her mother (the helmer’s real mother, Marysa Borini) calls her, an “old child.” When rehearsals for the play begin, she discovers that her old acting school chum, Nathalie (Lvovsky), is the director’s assistant. Nathalie’s life ­ a normal job, a husband and children ­ is the polar opposite of Valeria and the two woman are at that crossroad in life when they question the choices each has made. The problem I have with “Actresses” is the character Marcelline. Bruni Tedeschi does not give us anything sympathetic to hang on with the actress’s neurotic behavior, demanding personality and lack of tact ­ at one point she asks a priest to impregnate her in a fit of bad taste. The supporting cast includes the ever versatile Mathieu Amalric as the play director, Denis, a martinet of a man who harbors a dark, violent side. Noemie Lvovsky is competent as Marcelline’s former friend and now coworker and competition. Louis Garrel is one of the actors in the play and the object of desire to Natalie Petrovna (Valeria Golino), the figment of Marcelline’s troubled mind. (There are a couple of other hallucinations, too, of her long-dead grandfather and a lost lover.) The mix of the endless rehearsals, Marcelline’s lack of grip both personally and professionally and her surreal imaginings make for an uneven film. The staging and use of camera during the rehearsal sequences reminds of the franticness of the old drawing room comedies, but with actress angst.