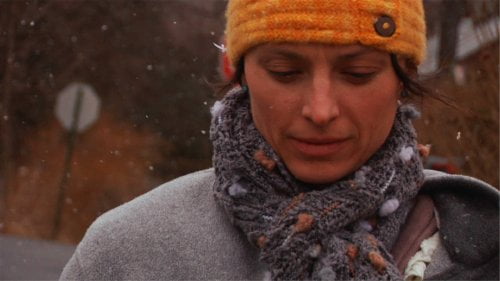 Brandy Burre’s claim to fame was her three season stint on the popular TV series, “The Wire.” After that she eschewed the actor’s life to raise a family. That is, until her relationship with her partner, Tim, goes sour. Left with two young kids, Henry and Stella, Brandy must face the facts and get back to being an “Actress.”

Producer/director/cinematographer/editor Robert Greene ("Fake It So Real") had been writing essays on the role of performance in documentary when it occurred to him to turn the camera on his Beacon, NY next-door-neighbor, 'The Wire's' Brandy Burre (recently seen in "Listen Up Philip," which Greene edited). Having quite the business when she became pregnant with her first child, Brandy was chafing against her domestic role and yearning to return to the one of "Actress." Greene gives us the domestic Burre - buying groceries, pushing refuse down the sink - and the one in between her present and past - stating that her 'artistic outlet' is her young children's playroom. But the persona clearly pushing to win is that of the narcissistic actor which we sense early on. What mother 'forgets' her three year-old's birthday, even if that child is away with the rest of the family? There's an element of mid-life crisis going on with the woman who prattles endlessly to her silent hairdresser about her career and the one who confesses she'd thrown out her partner Tim before and yearns for more spontaneity and romance. Greene's deep intimacy with his subject shocks as his camera catches her cheating on a night out in the big city which leads to an unraveling of her relationship with taciturn bar/restaurant owner Tim Reinke. A brave face is kept for the holidays as friends and family gather. Brandy pulls mom down memory lane, fast forwarding through her Wire claim-to-fame Season 4 on DVD. Greene photographs Burre from all made up and posing in her mirror to clean-faced, her hair set in curlers. His own Duchess County home town is lovingly shot with slo-mo snowstorms enveloping aging middle class neighborhoods. But is Burre giving a 'performance' or using his camera as a life-altering confessional? The compelling but not exactly sympathetic portrait is one hell of a risky audition. Grade:

If you look it up, you will find that “Actress” is a documentary. Upon watching it, though, I did not feel I was seeing a documentary. Instead, the film feels like a scripted docudrama that uses its title for dual purpose – to document an actress trying to return to her career and Brandy Burre acting to convince the viewer of her sincerity and capability – as mother and as actor – in looking for a job.. I was too cognizant of Brandy Burre’s acting as an actress to shake myself from the feeling that I (or someone) was being pitched to. “Actress” is a calling card that is less a documentary than it is an audition.