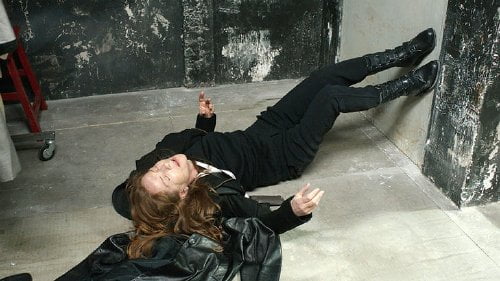 Film director Maud Schoenberg (Isabelle Huppert, "Amour") awakens one morning to find herself partially paralyzed, the victim of a stroke. But after a year of rehab, she's anxious to get to work on her new film and when she sees a con man who swindled $135 million on TV, she's fascinated and wants him as her star. But with Vilko Piran (rapper Kool Shen), you can't teach an old dog new tricks and he uses his rough charm for an "Abuse of Weakness."

The combination of Huppert and Breillat makes one wonder just what brand of perversity these two might offer. Writer/director Catherine Breillat's ("Fat Girl," "The Last Mistress") films have always been somewhat autobiographical - she suffered a physical setback similar to Maud's in 2004, then, in 2007, accused con man Christophe Rocancourt, who had been slated for her next film, of bilking her of €700K. What Breillat's doing here is exploring the balance of power. The diminutive Huppert has always been fierce, but here her fierceness is blunted by physical limitations. The great French actress nonetheless manages to portray both facets of Maud. What neither she nor Breillat do, however, is give us a plausible psychological explanation as to just why Maud allows Vilko to wipe her out financially unless we consider the description of the film she plans to make. In it, an actress allows herself to be brutalized by the crude man she loves. Maud makes herself breathless describing how beautiful it will be to see the woman's blood smeared across white bathroom tiles. The entire film has an underlying S&M theme that is more potent than Maud's final interpretation of her own behavior. The film opens with Maud attempting to get out of bed and crashing to the floor. A large group waits outside a hospital room anxiously (her children do not resurface until late in the film). She's told she's had a massive brain hemorrhage and lies in a sterile white room, trying to open up her clawed left hand with her right. Jean-Paul (Jean-François Lepetit, the film's producer) arrives from Cannes to tell her he's gotten €500K for the Italian rights to her film. A doctor holds up three colored balls - green, blue and red - and asks her to identify the color, which she does incorrectly. Slowly she regains her ability to walk, awkwardly and with a cane. After spying Vilko on a talk show, Maud calls her assistant, Ezzé (Christophe Sermet), demanding that he find him. She goes to have adaptive shoes fitted and insists on designing a boot with buckles and studs ('The handicapped need an S&M look.') Vilko meets her in her home and he's physically imposing, striding about observing her possessions, assessing her apartment's worth. When she notes his beautiful suit, she's told 'It's Dior. They dress me.' Vilko's notoriety has led him to the good life. He begins to call her incessantly and she excitedly tells Ezzé 'When it says Caller Unknown, it's him!' And yet she hangs up abruptly when he calls in the middle of the night. Then the requests for cash start coming. Vilko, who keeps telling Maud she's a tyrant ('your big trip is turning men into slaves'), balks at steadying her check book as she grapples with her pen. He instructs her to classify it as a loan. Next he says he 'wants her next book,' to coauthor it, asking for a check that is an 'advance for book collaboration.' The third check is written in a wordless scene, the fourth is both that and faceless, Maud evaporating as the amounts grow. Breillat's staging of the financial transactions feel Chabrolian. When Maud visits Vincent, his wife Andy (Laurence Ursino) and their new baby at Christmas, Vilko demands Andy show Maud her new purse - €12K! I did right by her.' The implication is obvious, even to Maud, and yet the situation continues to escalate. "Abuse of Weakness" is captivating because of Huppert's demanding physical performance and how the actress makes Maud revel in her own perversity, but once Vilko begins his scam it runs out of steam. Maud's film falls by the wayside and except for a few violent demands for her money, so, apparently, does the play of power (although Vilko falls into the 'slave' behavior he opposed the more he drains Maud's bank account, he clearly has the upper hand). Set designer Pierre-François Limbosch does more to keep the game afoot with his choice of colors, artwork and tchotchkes (a nude female paperweight is red in color, the figures's arms outstretched gripping a golden coin). Didier Lockwood's violin score is menacing and used sparingly.