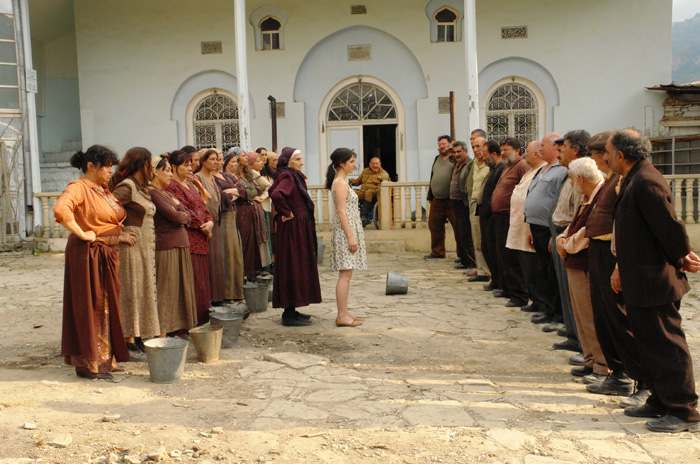 When God was parceling out land for all the different peoples of the world, one group of emissaries arrived too late. However because of their cheerfulness, God gave this last group the land he had originally set aside for Himself - "Absurdistan." Director Veit Helmer was inspired by a true story in which the women of Sirt in Turkey boycotted sex until their husbands solved the town's ailing water pipe problem and yet his latest also seems sprung from his magical 1999 film "Tuvalu," in which a young man must tend the obsolete machinery which pumps the water through his family's aging bathhouse while courting the daughter of a sea captain. Both films rely on fanciful imagery over dialogue to tell their stories of the importance of water in winning a young woman's heart. Temelko (Maximilian Mauff) and Aya (Kristyna Malérová) have been together since being born on the same day. When they spy a couple making love in the hills, Absurdistan's denizens being a lusty lot, the young teens' thoughts turn to romantic love. Aya insists on going to her Grandmother (Nino Chkheidze) to read their stars and they learn their 'first time' should occur on July 11 - four years from now. The stars also decree that they must bathe beforehand. After a hilarious montage which depicts how the women wash off the sweat of their day's labor in the local bathhouse (while the men watch through peepholes, "Porky's" style) before coupling off in styles which suggest their trades (the bakers in a tub of flour, the cobblers along with a giant bellows, etc.), we learn that since the collapse of the Soviet Union, no government has taken responsibility for Absurdistan. And so, when the water pipe into the village ceases to operate, it is up to the village to fix it. The men decide to send their younger generation into the city to study engineering, Temelko among them, but when the bus returns some time later, it is empty. Temelko alone returns to his now dirty and malodorous home town, but when he attempts to romance Aya she declares, in earshot of her babooshka, that he will not touch her until water flows once again into their village. The next day, Grandma tells the village of her granddaughter's commitment and all the women of the town follow suit. A battle of the sexes royale has begun. As in "Tuvalu," Veit's style is reminiscent of both France's Marc Caro & Jean-Pierre Jeunet ("Delicattessen") with their whimsical machinery and surreal worlds and Canada's Guy Maddin's use of silent film standards, but where Veit maintained a consistent style throughout "Tuvalu," much of "Absurdistan's delightful visuals are dispensed with once the town's line has been literally drawn. On the other hand, "Absurdistan's" situations are more laugh-out-loud funny than "Tuvalu's" more offbeat sensibilities. "Absurdistan's" watery theme is also enhanced by a subplot involving Temelko's endeavors to make his love feel as if she were flying, the most magical of which is wedded to water when he creates a gondola above the town using an old rowboat. "Absurdistan" was shot in Lahic, a mountain village in the northwest of Azerbaijan that could be the end (or the beginning) of the world. Helmer (what an appropriate name for a director!) gathered a cast and crew from thirty different countries to create his wonderful, allegorical fable, but its message is universal.