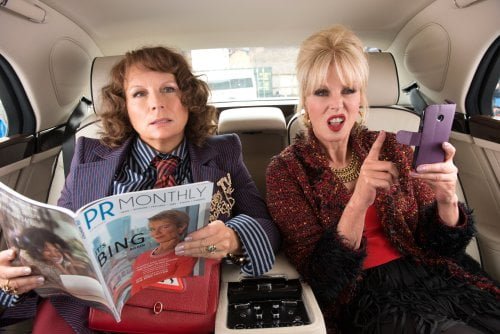 Unable to get her memoir published, most of which consists of Bubble's (Jane Horrocks) literal transcription of 'blah, blah, blah,' Edina Monsoon (Jennifer Saunders) is fighting for relevance in the PR industry with only a boutique vodka and 60’s pop icon Lulu (herself) for clients. When she gets word that Kate Moss (herself) has given up her representation, Eddy conscripts her granddaughter Lola (Indeyarna Donaldson-Holness) to attend a splashy industry party and chat up the supermodel. But in her haste to make an impression, Eddy knocks Moss into the Thames. She doesn't reappear. Now a national pariah, Eddy and her best friend, the original cougar Patsy Stone (Joanna Lumley), flee to Cannes where Patsy hopes to make good on an old marriage proposal and set themselves up in a life of luxury in "Absolutely Fabulous: The Movie."

After the death of her husband, Julie Ellis (Sally Hawkins, "Happy-Go-Lucky," "Paddington") is struggling to break through to her mathematically gifted autistic son Nathan (Asa Butterfield, "Hugo," "Ender's Game"). Help arrives when Martin Humphreys (Rafe Spall, "One Day," "Anonymous"), a teacher who's advancing MS has caused him to retire, offers to tutor the boy for entry into the International Mathematical Olympiad in "A Brilliant Young Mind." With its opening scene, "A Brilliant Young Mind" looks like it's going to be witty. Right after we hear the appraisal that although withdrawn, Nathan is 'without question a unique young man,' documentary filmmaker Morgan Matthews cuts to the British equivalent of a Spielbergian cookie cutter neighborhood. But Matthews never turns away from the opportunity for a musical montage and the film begins to drown in sentimental mush. The movie is raised above its material, though, by fine performances from Hawkins, whose maternal radiance compels, an irreverent and honest turn from Spall and an enjoyably offbeat interpretation from one of the greatest character actors working today, Eddie Marsan ("Tyrannosaur," Showtime's 'Ray Donovan'), as Nathan's squad leader. The title (originally "X+Y") is a bit misleading, as the film is less about Nathan's brilliance than it is about love and learning to grieve. The film is punctuated by flashbacks of Nathan (played at 9 by a more relatable Edward Baker-Close) with his father Michael (Martin McCann, "'71," "Boogaloo and Graham," noteworthy), who obviously adored the boy and who was taken in a car crash that his son survived. We see Nathan reject his mother at the funeral, refusing to give her comfort or hold her hand, the latter a goal TV writer James Graham beats to death on the way to the film's obvious climax. While Nathan responds to Martin's tutoring, he reacts badly to the man's friendship with his relationship-starved mom. At Olympiad camp in Taiwan, he's immediately accepted by Isaac Cooper (Alex Lawther, "The Imitation Game's" young Turing, more alive in his supporting role than the lead) while another autistic boy, Luke Shelton (Jake Davies), lashes out. Nathan inexplicably finds himself in the midst of a romantic rivalry, admired by pianist Rebecca Dunn (Alexa Davies), yet responding to Chinese student Zhang Mei (Jo Yang). It is this triangle that drives the narrative outcome as Nathan makes a surprising choice, one which allows a familial breakthrough. Matthews (making his feature debut based on a subject of his 'Beautiful Young Minds') dips into the mathematical theme of his film a few times, with Nathan's love of patterns, his use of binary to solve a blackboard problem and the Fibonacci Sequence for calm during airplane take-off, but although Rebecca points out how music is based on math, Martin Phipps's score ("The Keeping Room") fails to capitalize on that angle. Keaton Henson's 'You' is a lovely song, but it also accentuates the film's emotional aspect over its intellectual one (Kate Bush's 'Pi' would have been a nice counter). Butterfield, though, never breaks through here, his Nathan a blank slate whose awakening to human interaction is wan. And then there's that rainbow near movie's end, as if the filmmakers hadn't been telegraphing their intentions all along. The adult actors give us something to chew on, but this syrupy film's center is bland. Grade: