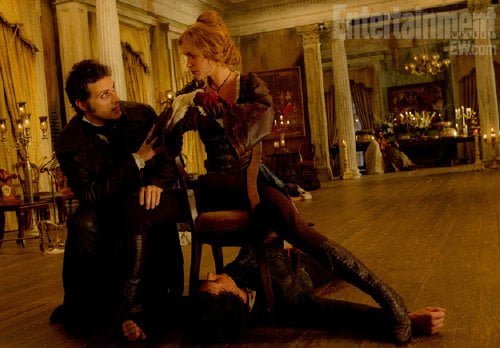 In 1820, young Abraham Lincoln sees his mother Nancy (Robin McLeavy, AMC's 'Hell on Wheels'), who taught her son that we are all slaves unless everyone is free, succumb to the bite of local businessman Jack Barts (Marton Csokas, "The Debt") and vows revenge. Years later, as President of the United States, Abe, knowing a secret about the Confederates, has his own secret after hours life as "Abraham Lincoln: Vampire Hunter."

Author and screenwriter Seth Grahame-Smith had a good idea with his revisionist vampire history of nineteenth century America. He kicked off the craze with his well done "Pride and Prejudice and Zombies" after all. But producer Tim Burton, who finds Lincoln's lie to be 'classic comic book super hero mythology' and Russian director Timur Bekmambetov ("Night Watch," "Wanted") have delivered one of the most godawful looking films I've ever seen projected on a screen. "Abraham Lincoln: Vampire Hunter" is this year's "Jonah Hex" as made by a bunch of videogame developers working with twenty year old technology. Even scenes with no to little effects look so drab, an apparent attempt to 'antique' the film without the cliched use of sepia, it's a jaw dropper to discover this was shot by famed cinematographer Caleb Deschanel ("The Natural"). In a prologue where the whip wielded by Jack Barts against young Abe's best friend Will, a black boy, comes out to tickle us in 3D, Abraham sees his first vampire. Cut to an extremely artificial looking flyover of Springfield, Illinois, where Lincoln has gone to study law. He gets a room with dry grocer Joshua Speed (Jimmi Simpson, "Date Night") in exchange for clerking and a couple of his first customers are his future presidential opponent Stephen A. Douglas (an uncredited Alan Tudyk TV's 'Subugatory') squiring the feisty Mary Todd (Mary Elizabeth Winstead, "Scott Pilgrim vs. the World"). His first attempt to take revenge on Barts goes all wrong, but he awakens to find himself battered and still alive in the home of Henry (Dominic Cooper, "The Devil's Double") who offers to teach him everything about killing the undead as long as he follows Henry's orders. And so Abe puts vengeance on the back burner as he takes out fanged pharmacists, bankers and smithies. He also continues to woo Mary, which eventually gets the attention of Adam (Rufus Sewell, "Dark City"), the creator of all vampires who is none too pleased with Lincoln's evening activities. Grahame-Smith's story cleverly works in the political strife which led to the Civil War, the Underground Railroad and Harriet Tubman (Jaqueline Fleming, "RED") and the war years themselves (only the third of the Lincolns' four children, Willie (Cameron M. Brown), who died at the age of 11, is featured here, because his death could be exploited by Grahame-Smith's revisionist vampire history), but the movie version all but buries them under lousy visuals and cliched action sequences. If one Abe leap with slo-mo swirling coat looks cool, five must look better and if things look dire just remember which of Abe's pals got left behind (this from one of the positive minority on Bekmametov's "Wanted"). The vampire effects are cartoonish if admittedly vicious. Still, by the time of the big climax featuring a bevy of the beasts, their pop out of the dark appearances give the impression of a Disney theme park ride (do watch for a decapitated vampire head that is the spitting image of 'True Blood's' Alexander Skarsgård). Stage actor Benjamin Walker (Broadway's “Bloody Bloody Andrew Jackson") obviously worked hard to get the action right, but I never once bought him as Lincoln - the performance seemed more an imitation of Liam Neeson than anything else. Supporting players like Cooper, Simpson and Winstead fare better and help make the experience somewhat more bearable, although the usually fine Anthony Mackie ("The Hurt Locker") doesn't leave much of an impression as the grown up Will. But a film like this needs great villains, too, and Sewell doesn't sink his teeth into this. Model Erin Wasson can't even attain eye candy status as Adam's female flunky Vadoma because the ugly photography shows up every pore and imperfection. The filmmakers set up a sequel at film's end that may produce a ghoulish chortle, but all this movie makes me want to do is read the source material which clearly has been done grievous service here.