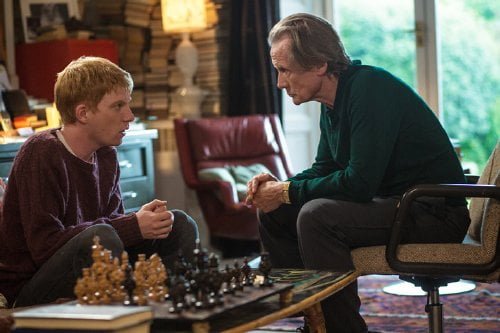 Tim Lake (Domhnall Gleeson, "Dredd," "Anna Karenina") adores his family, but finds himself too tall, too ginger and too awkward, an assessment he proves correct when he bungles a New Year's Eve kiss at his parents' annual party. But the next day his dad (Bill Nighy, "The Best Exotic Marigold Hotel") shares an extraordinary bit of information about the male Lake makeup - they can travel in time, at least into their own past. Tim thinks dad's having a hungover lark with him, but a half an hour later, he's repaired his gaffe of the night before and thinks his newfound inheritance just might assist his romantic endeavors - and at the age of 21, it's "About Time."

Ten years after his last romantic comedy, writer/director Richard Curtis ("Love Actually") returns with another of his squishy works, likable actors engaging in weddings and funerals throughout a story that inevitably runs too long approaching a climax that will be in plain view for anyone who's seen a movie or two. The Lakes are one of those fantastical families who live in a seaside estate in Cornwall even though dad's a professor who retired at 50 and mum's (Lindsay Duncan, "Under the Tuscan Sun") work consists of gardening and serving tea on the beach when not tending to her much loved, mentally challenged brother Desmond (Richard Cordery, a handicapped character a requisite component of Curtis's well worn template). Tim's opening voiceover makes so much of his admiration for younger free-spirit sister Kit Kat (Lydia Wilson, "Never Let Me Go") that although she largely disappears for the film's midsection, she may as well have been introduced as 'third act obstacle.' Tim's first foray into using his gift to land a girlfriend, Kit Kat's best friend Charlotte (Margot Robbie, TV's 'Pan Am') who's staying with the Lakes for the summer, is a lesson that while the gift can help solve problems, it doesn't necessarily make dreams come true. A move to London to study law (where he lodges with a friend of dad's, the delightfully disagreeable playwright Harry ("In the Loop's" Tom Hollander)) finds Tim putting his new plaything on the back burner until two eventful occurrences happen on the same night. Tim accompanies his friend and colleague Rory (Joshua McGuire, BBCA's 'The Hour') to London's famous Dans Le Noir where patrons are served in pitch blackness by blind waitstaff. They humorously engage with a couple of women at the next table and when they exit the restaurant, Tim finds his dreams have been answered when he lays his eyes on the lovely, yet insecure Mary (Rachel McAdams, who's trod this path before in "The Time Traveler's Wife"). But when Tim returns home he finds Harry distraught, his newest play's opening night annihilated by an actor forgetting his lines during the climatic scene. Tim's got the fix (with Richard E. Grant and Richard Griffiths as the thesps), but by changing his whereabouts he's never met his soul mate. The film's second act, which finds Tim bouncing back and forth within a short time period to reconnect with Mary, is cute, another restaurant scene charmer sealing the deal, but once they're married with children, things take a more dramatic turn and Curtis, who dispenses with any notion of time travel's 'butterfly effect' in early goings, finds a unique solution to throw a wrench into the works (its discovery, though, fluffs over a rather disturbing dismissal by our protagonist). It is here that Tim and his dad become more outspoken about their relationship over their traditional games of ping pong and the wonderful Bill Nighy proves "About Time's" most precious asset. Gleeson, who keeps impressing with an ability to jump from fantasy to genre to the classics, is a likable presence who grounds the film. In addition to showing his hand too early, Curtis's movie is choppy, especially once his central couple pairs up. A crisis of faith when Tim runs into Charlotte years later doesn't work and although McAdams's Mary blossoms in her lover's gaze, she's demoted to supporting player quickly after their marriage (the same happens to the wonderful Hollander - once his play's repaired, he turns into a footnote). The resolution of Kit Kat's downward spiral is too pat, involving a character who heretofore has had little reason for being. Richard Curtis is capable of spinning true sentiment amidst humor, his true love story here between father and son, but his contrivances and sugar-coated world undermine his better instincts.