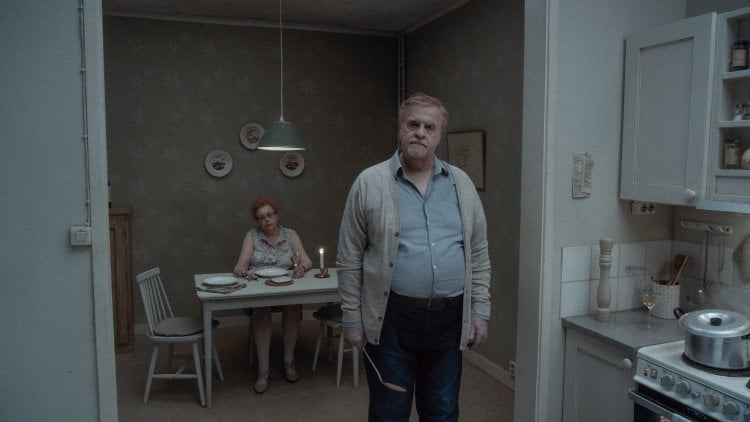 A couple of young lovers (Tatiana Delaunay and Anders Hellström) float above the bombed city of Cologne, a scene depicting both the joys and horrors of humankind.  Swedish director Roy Andersson (“A Pigeon Sat on a Branch Reflecting on Existence”) reminds us that life is both fleeting and a perpetual cycle in “About Endlessness.”

After completing the trilogy that began in 2000 with “Songs from the Second Floor” and wrapped with 2014’s “A Pigeon,” I thought perhaps we’d heard the last from Andersson, at least in the deadpan vignette style of those three films.  His latest, which won the Silver Lion for Best Direction at the 2019 Venice Film Festival, is unique in its use of a narrator (Jessica Louthander) who, inspired by Scheherazade’s tales of 1,001 Arabian Nights, alternately states the obvious or provides us with context with her ‘I saw a man who…’ commentary.  Otherwise, his built-in-studio (some amazingly so), neutral pastel-toned scenes filmed with a static camera and a straight face (admirable in his more absurdist moments) comprise a film which expands his trilogy into a quartet.

Actually his first two scenes may startle Andersson aficionados, as a distant landscape featuring greenery and a Stockholm subway stairwell encased in red bricks seem like blasts of color from a filmmaker who embraces off white.  We are quickly returned to the usual Andersson palette, however, which is not to say bland, washed out or dull as Andersson’s production design is pain-staking in its attention to detail.  I noted, for example, only one use of patterned fabric, the plaid side of a woman’s roller suitcase, and that pattern reflected back the train tracks to its left.  In another, a fishmonger and his customers watch a couple’s spat turn violent, then passionate, the expression of a grouper on ice seeming to comment upon the ruckus.

All of Andersson’s usual subjects are here, as is his use of reappearing characters.  The man seen rising from the subway (Jan Eje Ferling) is distraught that a high school classmate he mistreated snubs him as an adult as he, the narrator informs us, is on his way home to prepare a nice meal for his wife.  He will reappear later in his kitchen telling his wife about this man and how he wasn’t smart enough to earn the PhD he now holds.

Psychiatrists and the medical profession are represented, Dr. Lindh (Bengt Bergius) avoiding a priest (Martin Serner) who’s lost his faith while a dentist (Thore Flygel) deals with the cries of pain from a man who refuses Novocaine.  There are melancholy missed romantic connections, comical inconveniences and institutional cruelty.  As usual, Andersson notes Sweden’s complicated past with Nazi Germany in several scenes, one featuring Hitler amidst swirling plaster dust in a bunker being bombed (‘I saw a man who wanted to conquer the world and realized he would fail’).

As snow falls gently outside, a man in a crowded bar exclaims ‘Isn’t it fantastic?!’ to general ennui.  ‘I think so, at least,’ he mutters, reiterating that sentiment twice.  So do I.


Magnolia Pictures will release “About Endlessness” in theaters and on demand April 30th, 2021.