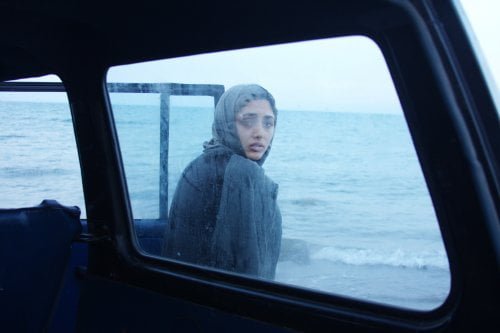 With their newly divorced friend Ahmad (Shahab Hosseini, looking like the Duplasses' better looking younger brother) arriving in Tehran from Germany, Sepideh (Golshifteh Farahani, "The Patience Stone") takes it upon herself to invite a possible love match on a group weekend vacation. The move is cause for much teasing, but also consternation, her husband Amir (Mani Haghighi, "Modest Reception") and the two other couples flustered by the thought of a stranger in their midst. While they all find they like the young woman, her mysterious disappearance will unveil more about themselves than "About Elly."

Before becoming known in the U.S. and winning 2012's Best Foreign Language Film Oscar for "A Separation," writer (story by Azad Jafarian)/director Asghar Farhadi had made four films. This gem from 2009, his fourth, is a far more satisfying experience than his last, "The Past," using a gripping psychological thriller structure to comment on Iranian society and group dynamics during tragedy. There are two things we notice immediately. First, Sepideh is this group's center, its organizer and general cheerleader. When the caravan arrives at the rental property's landlady's home (after passing vacationers clustered in colorful pup tents so crowded near the water they more resemble refugees than fun seekers), Sepideh is put on the spot, her booking for a villa near the woods not as concrete as she thought it was. She plays a playful 'honeymooners' card to negotiate another home, albeit one in disrepair, and the majority votes to go along with this seaside property. Secondly we note just how much weight the acceptance of Elly (Taraneh Alidoosti) bears upon the group, especially Sepideh. After assuring her friends that with Elly 'to know her is to love her,' she continues to poll them on their feelings on her friend. As the six adults and three children of Shohreh (Merila Zare'i, "A Separation") and Peyman (Peyman Moaadi, "Camp X-Ray") explore, the humble, pretty Elly quietly charms, setting right into work cleaning up their untidy rental. If you feel a bit unsettled watching the three small children make for the water in the chaos, it is Farhadi planting his first seed of unease. His second involves Elly's first disappearance and when one of the women reassures that she's gone to make a phone call, one of the men notes that she's gone off alone. Ahmad is sent to find her, but first Farhadi cuts to Elly, speaking to her mother, assuring her she's safe, will be home soon but that she should not tell anyone where she is. Ahmad arrives and the two appear to click, Elly bold enough to ask what happened with his marriage. He answers as his wife did - in German ('A bitter ending is better than endless bitterness.'). Back at the villa meat is being grilled, people laugh and joke and the landlady arrives with special bedding 'for the newlyweds' and a warning to lock the doors as the area is unsafe (recalling the mysterious events of another Iranian film, Jafar Panahi's "Closed Curtain"). While Elly's in the kitchen, she overhears Ahmad being teased about her presence. There is a game of charades and Elly fits right in. But the next morning, she's anxious, wishing to leave as she'd promised her mother. Sepideh will hear none of it, insisting she stay. Elly ends up left watching the children on the beach, then joins their play, rapturously flying a kite until she suddenly looks troubled, a storm cloud passing across her face. 'Take the kite, I have to go,' she says, but we do not see who she's addressing. A crying child interrupts the men's volleyball and is ignored until the elder Mordavish comes, announcing 'Arash is in the water.' Farhadi kicks into high gear here, Ahmad, Amir, Manoochehr (Ahmad Mehranfar) and the boy's father all jumping into action. After many tense minutes, one crisis averted, realization of another disappearance dawns. It is assumed Elly must have gone after Arash. A panicked Sepideh is pulled from the water, but when police divers are unable to locate anyone in the rough sea the group is called upon to provide information and it is only then we realize how little they have. We learn that even Sepideh, who invited Elly, knows her only as Mordavish's teacher. She cannot even provide the woman's surname. As they search for answers, the ones they find are overturned with more questions. But there is one thing Sepideh knows that she hasn't told them and its revelation brings accusations and another stranger into their midst. With "About Elly," Farhadi has fashioned a film that is both universal in its portrayal of a group enjoying each other's company while settling in new surroundings and something distinctly Iranian in its cultural attitudes towards women and marriage. The gorgeous, bubbly Sepideh is worn down by guilt and her husband's increasing annoyance with what he views as her meddling. The most forward-thinking male in the assemblage is the one who settled in a Western country only to end up divorced. Matchmaking is initially regarded with good natured joshing, yet its repercussions are deadly serious. Given an obstacle, the group will flow around it like a stream around a rock, until that obstacle is viewed as a threat, a more global reaction. (The script's one wobble is the easily disproven lie the group first uses as protection. Then again, confusion breeds disorganization.) The more we learn about Elly, the more mysterious she becomes. Farhadi's beautifully written script suggests many different reasons - valor, suicide, accident, even murder - for the woman's disappearance without giving us a resolution. Instead he's left us with something far weightier to digest - just how much was this lovely woman valued as a human being by those she left behind? Grade:

Three families head off from homes in Tehran for a weekend by the sea together. One of the women, Sepideh (Golshifteh Farahani), invites her daughter’s schoolteacher, Elly (Taraneh Alidoosti, to come along, hoping to do a little matchmaking for her divorced friend Ahmad (Shahab Hosseini). But what starts out as a holiday will turn tragic in “About Elly.” Iranian-born Asghar Farhadi is known for his personal films, such as “The Separation (2011)” and “The Past (2013).” “About Elly (2009)” is finally getting released here and it is complex story that is full of surprises and plot twists that keep the viewer intrigued all the way through. This is the kind of dramatic tale that should have as little said about the plot as possible. The twists and personal interactions between the many players should come as fresh and new to the viewer. Farhadi exhibits a deft hand at marshalling his large cast and wrote the film’s screenplay (from the story by Azad Jafarian) that is a heartbreaking tragedy.. The ensemble cast is excellent with all giving solid performances and imbue their characters with believable depth and complexity. These are real people coping with a terrible mystery that unfolds steadily to its conclusion.