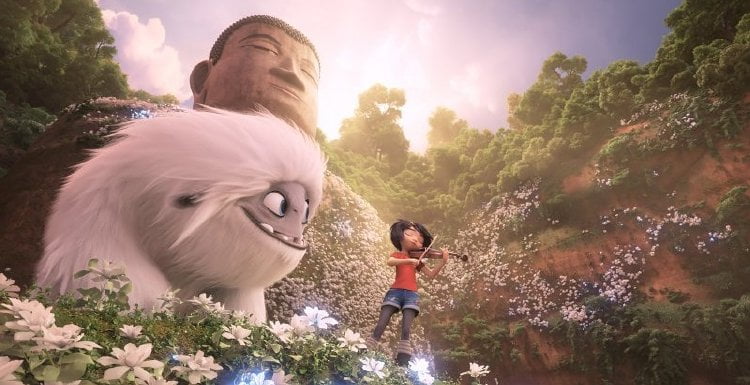 A high-security research facility suffers a breach and a large white furry creature scurries to escape and find cover and safety. A young girl, Yi (Chloe Bennet), has dreams of visiting all of the historic places her late violinist father played in China. Girl and creature will soon meet and, together, they journey to take back home the “Abominable.”

Since her father died, teenaged Yi (voice of Chloe Bennet) keeps herself busy with an assortment of odd jobs that allow her to distance herself from her frustrated mom (voice of Michelle Wong) and Nai Nai (voice of Tsai Chin). She even claims to have sold her most precious possession, her dad’s violin, to avoid playing for her mom. But she does so in private, on the rooftop of their apartment building, where one evening she encounters another lost soul, a young Yeti escaped from billionaire Burnish’s (voice of Eddie Izzard) research facility, in “Abominable.”

The third yeti animation to come down the pike in less than a year (after “Smallfoot” and “Missing Link”) isn’t the best or most original but it features a fine heroine and has its moments. While traveling the well worn path of the ‘innocent creature wanted by evil authorities being saved by children,’ writer/director Jill Culton (“Open Season”) and codirector Todd Wilderman examine grief and the widening perspective of empathy. Taking advantage of appealing to a Chinese audience, the filmmakers fashion their story around a virtual tour of China and it is that aspect of “Abominable” where the film’s beauty sings.

As Yi returns from walking dogs and emptying restaurant trash, she’s sniffed by her popular neighbor Jin (voice of Tenzing Norgay Trainor), who puts great stock in appearances, especially his own. Eluding his cousin, basketball obsessed 9 year-old Peng (voice of Albert Tsai), Yi climbs the stairs and darts past her Nai Nai to access her own private rooftop space. Startled by a helicopter, she drops her precious instrument. Reaching for it, she spots a paw. A really big paw. The huge creature huddled within a shed clearly needs assistance and Yi provides it. Nai Nai is thrilled when Yi’s suddenly hungry enough to grab a dozen steamed buns, but it isn’t until she plays again that the big white fur ball begins to relax. Noting its interest in the tourist billboard touting Mount Everest, Yi puts two and two together and when those copters come roaring back, vows to get the animal she names Everest (voice of Joseph Izzo) back to its namesake home.

Yi identifies a cargo ship leaving harbor and gets the yeti to jump aboard. But she cannot bring herself to leave the frightened creature alone and so resolves to accompany him. Peng follows for the adventure and so Jin is forced to make the leap as well, disgusted when he lands in muck that ruins his new expensive sneakers. Burnish will not give up easily, though, and so they are followed by his British zoologist, Dr. Zara (voice of Sarah Paulson), and an entire swat team.

The foursome on the run are well matched, Everest a young yeti at the same maturity level of the playful Peng, the fastidious Jin the same age as the tomboyish Yi. If Yi’s music connects her to both her father and Everest, the yeti reveals a magical connection to nature in his humming response (first seen when a dying orchid plant on Yi’s roof suddenly flowered). Unfortunately, this aspect of the film makes for some of its more outlandish scenes, the group running from giant blueberries or ‘surfing’ through mountains of canola flowers, both conjured by the yeti’s song.

What is lovely is how, after Everest fixes Yi’s violin with his own fur, the wisteria flowers, glowing pink and lavender on the screen as Yi plays her violin in a tree or how white flowers spring up upon the Leshan Buddha when she finally mourns her father (with a piece based on Coldplay’s ‘Fix You’). Clouds in the shape of koi provide transport, too, but the yeti’s magical abilities beg a simpler resolution to their problem, his powers only coming into play at the last moment before capture a blatant screenwriting device.

The animation is best in its establishment of place from the unnamed city where the tale begins, full of characteristic detail, to that astonishing, towering Buddha. People are given the anime treatment, the diminutive Nai Nai looking like the Michelin Man in silhouette. Everest himself resembles the abominable snowman from the 1964 Rankin/Bass ‘Rudolph the Red-Nosed Reindeer.’ Better are Zara’s pet jerboa, Duchess, and the whooping snakes who pop up to startle when we least expect them.

“Abominable” is a fine family adventure set in a wondrous world.

Yetis have been the subject of a number of animated films of late - “Missing Link,” earlier this year, and “Smallfoot” from last year are just two and Bumble, the Abominable Snow Monster from the 1964 Christmas classic, “Rudolph the Red-Nosed Reindeer” is one of the first. (And, I just remembered my earliest recollection of Yeti movies, “The Abominable Snowman (1957), starring Forrest Tucker.)

Sophomore writer-director Jill Culton and first-timer director Todd Wilderman tackle the mythical subject again with “Abominable.” The get-the-[name the critter)-home story has been done many times with interchangeable creatures either trying to get back to a home in a far, far away place, or helping that creature to get back home to a far, far away place. This straightforward story framework is used in a visually interesting but routine tale of good guys and bad guys and right versus wrong. The bad guys are let by a selfish, uncaring billionaire who cares naught for anyone or anything except for his greed – sound familiar? – and the henchmen doing his bidding. The good guys are, of course, really good guys, as expected.

The story sets things up quickly and early as Yi, with the help of her handsome cousin Jin (Tenzing Norgay Trainor) and his diminutive sidekick, basketball hopeful Peng (Albert Tsai), upon finding the Yeti she dubs Everest, vows to get him (her?) home – to the far off Himalaya Mountains. As if their quest is not daunting enough, the evil Burnish Industries owner (Eddie Izzard) and his head henchman, the unscrupulous Dr. Zara (Sarah Paulson), want Everest for their own selfish purposes.

That is about it for a story as the filmmakers rely on the personalities of its characters to give it shape and substance. But, there is nothing new in this fairytale, characters included, and it is vaguely similarity, though less deftly told, to the wonderful mystical creature fantasy, “Okja (2017).” (I highly recommend making the time for the latter movie.)

Everest, while a pretty mystical creation just being a Yeti, gets even more magical treatment, kind of like ET, to save the day at critical times. This seemed like the too-easy way out to overcome the daunting obstacles but “Abominable,” though not original, is entertaining, mostly for kids.