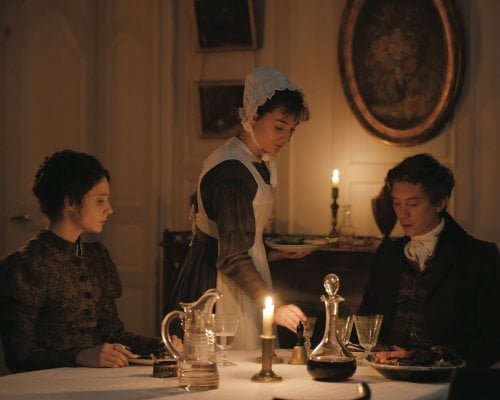 In early 19th century Normandy, the lovely Jeanne (Judith Chemla, "The Princess of Montpensier") returns from convent school to the chateau of her parents, Baron Simon-Jacques Le Perthuis des Vauds (Jean-Pierre Darroussin, "Le Havre") and his wife, the Baroness Adélaïde (Yolande Moreau, "Séraphine"). Jeanne's idyllic days are spent learning gardening from her father and reminiscing over her mother's old letters, playing backgammon with both in the evening. The local priest, Picot (Olivier Perrier, "Of Gods and Men"), arrives with a young man, Julien de Lamare (Swann Arlaud, "Romantics Anonymous"), a prospective suitor. Jeanne's enlightened father asks how she feels about him, her mother nudging approval. They move to Rouen, leaving the chateau to their daughter and her less financially sound husband, and the kindness and love which enveloped Jeanne slowly evaporates from "A Woman's Life."

With his adaptation of Guy de Maupassant's 'Une Vie,' writer/director Stéphane Brizé ("The Measure of a Man") plunges us into experiencing a patriarchal society through the eyes of one woman. This movie stuns with its ability to make us feel Jeanne's horrified disillusionment as we see color and life drain from her face. Cinematographer Antoine Héberlé's ("Under the Sand," "Paradise Now") handheld camera, framing with the severe 1.33 Academy ratio, might at first feel at odds with a period piece, especially one featuring such natural beauty, but the camera's movement and its tight window keep us within Jeanne's experience as her world is crushed by outside control.

Brizé and his editor Anne Klotz ("The Measure of a Man") jump backwards and forwards in time, but not in the usual way, instead contrasting happier times with harsher ones, wordless glimpses forming a jigsaw of the memories which shape a life. After establishing Jeanne's familial contentment, we briefly see a future Jeanne, the landscape and her dress dark, shadows beneath her unsmiling eyes. Snippets of a sun dappled courtship, Jeanne and Julien on a boat are followed by their wedding night, Jeanne shrinking into herself, tears streaming down her face as Julien forces himself on her. She spends a lot of time alone and Julien begins to complain that she's using too much firewood, too many candles. He barks at Rosalie (Nina Meurisse), the servant Jeanne's grown up with, then demands the young woman leave when she becomes pregnant. Jeanne defends her, until she's shocked by what is revealed when she opens Julien's bedroom door late one night.

The marriage is righted, again by that priest and her mother, who dies shortly thereafter, her daughter's discovery of a hidden life in her box of letters another blow to her innocence. Happiness returns when Julien finally allows a friendship with neighboring Gilberte de Fourville (Clotilde Hesme, TV's 'The Returned') and his wife Georges (Alain Beigel, "My King") now that their carriage sports a coat of arms, but this too, turns tragic when Julien slips into old habits and another priest, Tolbiac (Père François-Xavier Ledoux), makes a Jeanne looking for comfort from 'all these lies' complicit in her husband's misdeeds.

Widowed, Jeanne is now anguished by her father's refusal to allow her young son Paul to come home from the boarding school he detests (Brizé allows her visit scene to go on and on as the young boy's tantrum increases in its fury). When he finally returns at the age of 20, Jeanne passes on her father's love of the soil and Paul (Finnegan Oldfield, "Bang Gang") appears content, but Jeanne's anxiety over a woman in his background proves founded when he disappears, a note left describing how he's heading to London with her to make his fortune. Over the years, he'll bleed his mother's dry and Rosalie, now widowed herself, returns to bear Jeanne's irrational denunciations.

There's a terrible irony in Brizé's hopeful ending, which he notably cuts short. "A Woman's Life" is truth in advertising, an exquisite piece of filmmaking.

Women, to this day, are still treated unfairly when compared to men. Just look at the continuing and gaping chasm over equal pay. A century and a half ago, though, the gap, on all levels, between men and women was far greater. We see, through the eyes Jeanne, what it was like, back then, to live “A Woman’s Life.”

From a guy POV, a period story about a young woman from a well-to-do family who has to cope with the inherently misogynic male-dominated French society in the middle of the 19th Century is not exactly a draw.

That said, Stephane Brize directs and co-writes with Florence Vignon this subtle drama seen through the eyes of Jeanne (Judith Chemla), a vibrant young woman who loves her life as the pampered daughter of doting parents. This idyllic existence, when Jeanne becomes marriage material, changes and follows “A Woman’s Life” in a profoundly personal and moving story.

We watch Jeanne’s life unfold, from the abovementioned idyll times to her arranged marriage to Julien (Swann Arlaud), titled but poor, and his dalliances not well hidden from his cuckolded wife. She is an intelligent woman in a thoroughly man’s world where Julien’s “weakness of character” is less a sin than is Jeanne’s if she decides to not forgive him.

The power of the Catholic Church, and its male purveyors of faith, rests heavily on Jeanne’s decisions. Even when she refuses to expose Julien’s latest peccadillo, the local priest insists on interceding and the result is immoral and murderous. But Jeanne must bear other of life’s burdens, including a spoiled and selfish son who used his mother’s love to bleed her dry.

Though Judith Chemla is the central character in this adaption of the 1883 novel by Guy de Maupassant, Une Vie, every player is fully formed, resulting in the richly told and acted play of the title. Forget the guy POV mentioned above. “A Woman’s Life” is a real draw.