A Woman, A Gun and a Noodle Shop 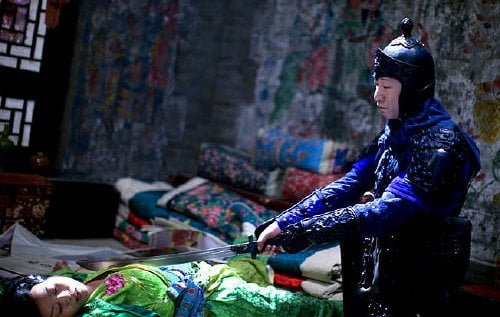 Wang (Dahong Ni owns a noodle shop in a desert village at the end of the Great Wall. His wife (Ni Yan) hates her cruel, abusive husband and has taken to seeing her husband’s employee, Li (Xiao Shen-Yang). When she buys a handgun from a flamboyant Persian trader, the wife sets in motion a series of events that will have deadly consequences for all involved in “A Woman, A Gun and a Noodle Shop.”

The great Chinese filmmaker Zhang Yimou ("Raise the Red Lantern," "House of Flying Daggers") remakes the Coen Brothers' first film, "Blood Simple," with results that will be intriguing to cineastes and maybe less so to general audiences. Where the Coen Brothers' film was darkly humorous, Yimou goes for a broad comedy that may not translate to American audiences (crossed eyes and buck teeth used for laughs, for example) and his pace seems draggy. Still, his setting, the Jiayu Pass near the Westernmost part of the Great Wall, is stunning and it's fun to match up the similarities of the two films (shafts of light left by a weapon and irony upon irony) between two different centuries and continents.

Maestro filmmaker Zhang Yimou has tackled many genres over the years in film. With “A Woman, a Gun and a Noodle Shop” he enters a new realm – remake the darkly funny film noir of the Coen Brothers debut, “Blood Simple.” This seemed like an odd choice but you have to figure, with the Coens’ story and Zhang Yimou directing the script, by Xu Zhengchao and Shi Jianquan, this is going to be good. “A Woman…,” though, falls short of its predecessor. Where “Blood Simple” is a film noir with a solid base of dark humor and imaginative camera work, both signatures of the Coen team, “A Woman…” intersperses farcical comedy and slapstick in with the drama and the product is uneven. The masterly use of majestic landscapes and expert lensing by Zhao Xiaoding make this a beautiful film to watch but the combination of bloody drama and silly comedy take me out of the moment.