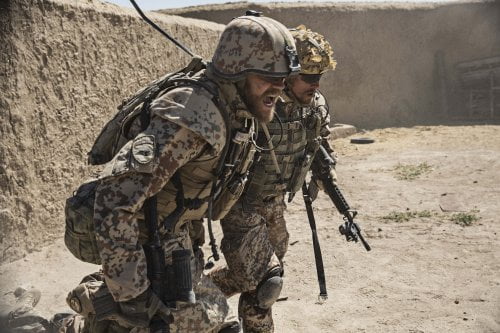 When one of his soldiers has his legs blown off patrolling their Afghan province, commanding officer Claus Michael Pedersen (Pilou Asbæk, "A Hijacking") decides to take a more active role. But when he makes a decision in order to save another of his men, it will also impact the people he is there to protect as well as his wife and children back in Denmark in "A War."

As he did in his previous film, "A Hijacking," writer/director Tobias Lindholm looks at Danish men in danger at their work abroad, the natives whose lives are caught up in the business at hand, and the folks back home who can only imagine what they are going through. This time, though, the director also takes on the larger implications of the War in Afghanistan. Without judgement, we're shown how rules of engagement, both followed and broken, can lead to the loss of innocent lives. As seen in countless war films, Claus and the men he leads form deep bonds as they're subjected to constant imminent catastrophe. Concerned not only for the man lost in the field but the man's friend, so shaken he is unable to perform, Claus takes on a more direct, paternal approach. His good friend and right hand man Najib (Dar Salim, "A Hijacking") cautions that he's going too far. Meanwhile, back home, Claus's wife Maria (Tuva Novotny, "Eat Pray Love") struggles to maintain their home and three young children, their lives structured around work, school and scheduled phone calls from dad which are often cut short. When their youngest gets into prescription pills, Maria copes with a visit to the ER along with her elder daughter and son, each exhibiting behavior based on dad's absence. About the same time, Claus is called upon by an Afghani father whose young son is sick, but in assisting the family, the Danes inadvertently focus the attention of their enemy on the innocents. Claus must tell the father, who has been threatened with death, that he cannot stay with his family at the compound, but that troops will return the next day to clear out Taliban forces. When they do, they find themselves under heavy fire and another of his men is critically injured. Claus tells his TOC what they need to hear in order to get his men to safety. No sooner have he and his men enjoyed a Skype session with their recovering comrade, than Claus is called to report to investigating officers, who question the validity of his target ID. Turns out his directed attack resulted in the deaths of eleven civilians. Claus is ordered home to face trial. Asbæk paints a beautiful portrait of a man who must be all things to many, a compassionate man whose caring nature perhaps makes him lose sight of a bigger picture. Novotny is a supportive wife who cannot fathom why he'd contemplate putting the truth over his family. Interestingly, Lindholm has cast an actress, Charlotte Munck ("Headhunter"), who superficially resembles her as the prosecuting attorney, allowing us to contemplate how Maria might feel differently were she not a soldier's wife. The director has achieved natural performances from the real Danish soldiers and Afghanis who make up the nonprofessional element of his ensemble. The production is as realistic in war as it is in the home front. Scoring is subtle, used sparingly for transitional purposes. With "A War," Lindholm solidifies his talent for objectively and insightfully presenting multiple points of view during crisis. Grade: