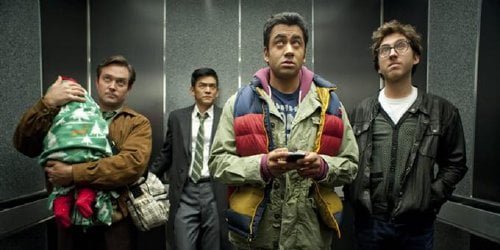 We anguished over whether or not they would get to the White Castle. We fretted when they were jailed and escaped from Guantanamo Bay. Now, we have to worry whether or not they can find the perfect tree and save “A Very Harold & Kumar 3D Christmas.”

As Harold (John Cho) evades Wall St. occupiers to make it home to his loving wife Maria (Paula Garcés, "Harold & Kumar Go to White Castle") with the help of office mate Todd (Tom Lennon), his former buddy Kumar (Kal Penn) is settled in to get high with weed from his supplier, the Mall Santa (Patton Oswalt, "Big Fan"). When a package arrives for Harold at Kumar's house, he and his buddy Adrian (Amir Blumenfeld) reluctantly travel out to deliver it to Harold where the two former friends end up in an awkward reunion just in time for "A Very Harold and Kumar 3D Christmas." The boys are back after three years and Kal Penn's stint in the White House and if you were wondering whatever happened to the Amsterdam adventure which closed their series' second film, it ended up as a 12 minute short DVD extra on "Harold and Kumar Escape from Guantanamo Bay." When we meet up with them now they're estranged by the same values that always gave them conflict. When Maria asks why he hasn't asked his oldest friend to their Christmas party, Harold asserts that Kumar always turns everything into a disaster. Not two minutes into his friend's suburban Colonial and Kumar's managed to set the Christmas tree which Harold's visiting father-in-law (Danny Trejo, "Machete") grew for eight years on fire. Harold only has until 2 a.m., when his wife's extensive family returns from midnight Mass in Manhattan, to find an exact replacement and it is this quest which guides the film. Harold and Kumar have always been amusing not only because of their modern day Cheech and Chong type scrapes but because Harold is wired in to what society expects where Kumar is completely irresponsible. This one has an unexpected twist - Harold no longer indulges in weed because he and Maria are trying to have a baby. Impending fatherhood (and a desire to ape images from "The Hangover") hangs over this film, most notably in the form of Baby Ava (Hannah, Ashley and Chloe Coss), Todd's toddler who ends up taken along for the ride and, in the film's funniest bits, consumes more drugs than anyone. (The second tier buddies of the first two films, Rosenberg (Eddie Kaye Thomas, "Harold & Kumar Go to White Castle") and Goldstein (David Krumholtz, "Harold & Kumar Go to White Castle") make an amusing little guest appearance.) Those who find 'child endangerment drug humor' offensive should stay away, as the film has plenty more to throw at you including two explicit penis gags and the trash talk of series secret weapon Neil Patrick Harris, who says things about Clay Aiken I wouldn't want to quote. But the humor is intermittent and the bad blood between the buddies can put a pall over the proceedings. Elias Koteas ("Shutter Island," "Let Me In") doesn't lend much as the Russian mob leader wanting revenge for Adrian's clueless attempt to deflower his frustrated daughter (Jordan Hinson as Mary, whom everyone else is smart enough to give wide berth). Still, there are laughs to be had, especially of the coarse variety. Director Todd Strauss-Schulson uses the 3D device to ramp up jokes and throw things around and gets more mileage out of a beer pong contest than it otherwise should have had. Other effects in the film, like the fire which consumes the tree, or even the set for Patrick Harris's NYC Christmas show, look cheesy. Writers Jon Hurwitz & Hayden Schlossberg ("Harold & Kumar Go to White Castle") milk their Christmas tree throughline to death and the film's climax, which is more 'bad to Santa' than "Bad Santa," ends things on an iffy note. "A Very Harold and Kumar 3D Christmas" is probably a lot jollier for those who prefer illegal Christmas greenery.

Aside from returning to 3D’s roots in the 1950s where things jumped off the screen and in your face, there is little to warrant visiting H&K for a third time. As is the case with “trequels,” the humor relies, increasingly, on toilet and drug humor (OK, a little baby zonked on cocaine and, literally, climbing the ceiling brings a guffaw at first but the idea gets creepy real fast). The play on the tongue stuck to the frozen pole in “A Christmas Story” uses a different body part in the same predicament and is decidedly not funny. I did like Kumar blowing pot smoke in my face in 3D, making a good case for smellorama 3D. The story has Harold and Kumar as long estranged ex-friends. Kumar has taken the low road, giving up his studies in medicine and living the life of a stoned slacker. Harold, on the other hand, married his beloved Maria (Paula Garces) and has become a successful corporate executive. Each is content with their respective lives but this will change when Kumar receives a large package addressed to Harold. Kumar wants to do the right thing and treks to the ‘burbs to deliver the mysterious parcel. Meanwhile, Harold, in an effort to impress his father in-law Carlos (Danny Trejo), has gone all out for the Christmas holiday, decorating the house to the max and installing, as the centerpiece, an enormous artificial white tree. Carlos, though, has a hobby – he grows the Christmas trees for his family and brought a 12-foot tree for the occasion. Harold, wanting to keep peace in the family, offers to decorate the tree – perfectly – while the rest go into New York for the festive occasion and to attend midnight mass. Just about this time, Kumar shows up on Harold’s door and gives his former friend the package. Harold unwraps the parcel and finds an elaborately carved wooden case inside of which is a giant joint. Kumar eyes light up and he immediately sparks the doob, much to Harold’s horror (he gave up weed when he married). Furious, he grabs the join and hurls it out the window but does not see it blows back inside and onto Carlos’s extremely flammable tree. This disaster is just the first of a string that Harold and Kumar must face to save Christmas. This cliché is just an excuse to roll out a series of drug and sex gags that are meant to show how cool and hip the third in the franchise can be. I guess if you roll out enough jokes, the odds are with you to get some laughs, at least. Just some laughs are not enough for “A Very H&K 3D Christmas.” Kal Pen and Hon Cho go through their paces with a likability quotient and, as promised, Neil Patrick Harris makes his appearance (even though he died in the H&K sequel). Their trials and tribulations blur in the trequel, making for a very long 90 minutes.