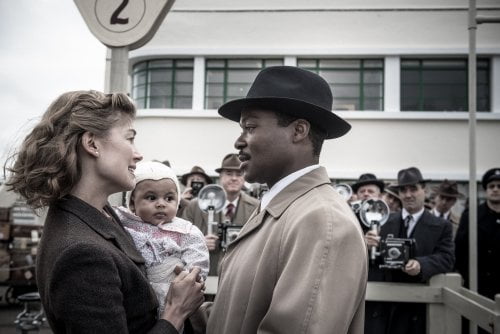 In 1948, Prince Seretse Khama (David Oyelowo), of Botswana, is studying in post-war London, preparing as the heir-apparent to the throne of his country. He meets, at a social dance, a pretty Londoner, Ruth Williams (Rosamund Pike), and their chemistry is instantaneous. They romance and marry, against the wishes of her father, the British government and his own people, and return home to controversy. Will Seretse’s people reject their new, white queen? Or, will they accept her for “A United Kingdom.”

It's heartening to see greed and corruption overcome by the righteous in this day and age and the story of Seretse Khama and Ruth Williams is almost incredible. Oyelowo (whose wife, amusingly, is cast as the wife of chief bad guy, Jack Davenport's Alistair Canning) and Pike create a hugely sympathetic relationship, one formed of mutual attraction and interests which grows deeper when challenged. After "Belle," Amma Asante is carving a niche for herself telling British interracial historical romances. While this one's pacing is a bit slower, its story is more compelling.

We have been presented with three films, in recent months, which bring to light, at least to me, subjects that I did not know about. (And I call myself a history buff.) “Hidden Figures” tells the true story of three African American women, well educated, who burst the racial barrier in 1960s NASA and did the math that guided John Glenn in his historic Earth orbit and safely back again. “A United Kingdom” tells the true story of the romance and marriage of Seretse and Ruth, a black man and a white woman. This is similar in tone to the other true life interracial marriage story of last year, “Loving” - that film was about two average people who stand up to the bigotry and race hatred in their home state of Virginia, culminating in a Supreme Court decision (in there favor, if you had not guessed).. Amma Asante, who came to international acclaim with “Belle (2013),” brings us this modern fairytale fable of true love that shines throughout international adversity. In this case, it is with Seretse, in line for the Botswana (then Bechunaland, a British protectorate, not colony) throne who married white commoner, Ruth. Of course, the marriage is not just controversial in his home country. It becomes an international scandal drawing the ire of the British government and apartheid-controlled South Africa. Love, as we know, will prevail over adversity. David Oyelowo and Rosamund Pike have terrific chemistry as the young couple bucking the system and both give solid, convincing performances. Oyelowo gives his character the royal dignity, intelligence and dedication to his country, but, more so, loyalty to his wife. Rosamund Pike conveys radiance and kindness and a real love for her husband and his, becoming her, people. Asante, while focusing on the love story, also uses the backdrop of British imperialism after the war to show, even though the empire is fast shrinking, as it tries to maintain iron control over its remains. The new age, though, means independence, sometimes hard fought, for the colonies and, in the case of Botswana, protectorates. (Look up the difference between the two,) With “A United Kingdom” we get a love story and a quiet revolution that propelled Botswana to independence and, because of mineral wealth including diamonds and copper and an honest government (led by Seretse then and by his grandson now), to prosperity, the most prosperous in Africa.