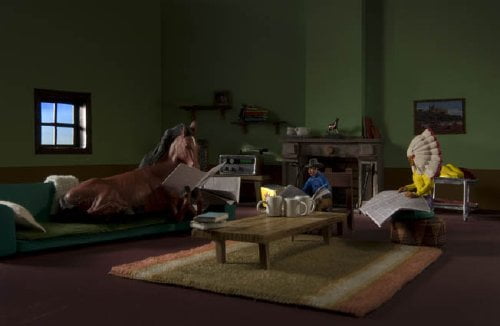 In a small rural village a postman delivers the mail, but the birthday card Cheval/Horse (voice of Vincent Patar) receives from his brother-in-law throws his housemates Cowboy (voice of Stéphane Aubier) and Indien/Indian (voice of Bruce Ellison) into a frenzy as they have forgotten his birthday. After concocting a ruse to get Horse out of the house, the hapless Cowboy and Indian mistakenly order 50 million bricks to build a barbecue, setting off a chain of events that will turn their little hamlet into "A Town Called Panic."

Continental Europeans have embraced the American Western from the turn of the twentieth century books of Germany's Karl May to the spaghetti Western films of Italy, but never has the genre been processed through such a delightfully warped worldview as it has by the Belgian writing/directing/vocal team of Stéphane Aubier and Vincent Patar who have turned their Belgian television series into a 75 minute theatrical edition. Using crudely fashioned sets and plastic toys - the kind with the bases on them a la the "Toy Story" paratroopers - the filmmakers animate in stop motion in a world where props are randomly proportioned to the toys which use them or the humans which placed them there. Horse may read a toy horse-sized newspaper, but his deodorant is spritzed from a human-sized perfume atomizer placed in a toy-sized bathroom. Special effects, like gun fire and explosions, are accomplished by the use of paper cutouts. In addition to the three principals, there is the farmer next door, the screaming Steven (voice of Benoît Poelvoorde, "Man Bites Dog," "Coco Before Chanel"), his wife Janine (voice of Véronique Dumont) and their pigs and sheep, which take music lessons from Madame Longrée (voice of Jeanne Balibar, "The Duchess of Langeais"), the red-maned horse who makes our Horse rather tongue-tied. She arrives at Horse's house in the evening with a birthday gift. A wild party, complete with disco ball and a portable bar, ensues, but the next day their is a problem with the excess bricks (Indian ordered 50, but Cowboy placed a cup on the '0' key on his keyboard and voila). The threesome decide to rebuild Horse's house, but their walls are stolen, leading them on a chase of more plastic-based creatures who look like miniature creatures of the Black Lagoon from Horse's well. This adventure leads them to the earth's core and to the North Pole where they also encounter maniac scientists and a giant armed penguin robot (shades of Aardman here) which throws giant snowballs. All the while, Horse receives calls on his cell phone from the music school, whose administrator is irate that he keeps missing lessons. And there are waffles - human-sized waffles. Watching a film like "A Town Called Panic" makes one wonder just how the imagination was sparked to come up with all this lunacy - quite clever, laugh out loud lunacy - and yet the film does sag just a little bit, the 75 minute run time required to call a film a feature perhaps a little too long to keep up the pace. But the film is nonetheless packed with wacky vocal performances, ingenious sight gags and one wacky, meandering plot. Aubier and Patar could be the children of Aardman's Nick Park and South Park's Trey Parker and Matt Stone with Gumby's late Art Clokey as benevolent godfather.

Belgian animation filmmakers Stephane Aubier and Vincent Patar create a low budget, crudely done little film that is, often, hysterically funny. Using simple claymation and children’s molded plastic figures; they introduce Horse, Cowboy and Indian, three friends who live together in their comfy little home. Horse’s birthday is fast approaching and Cowboy and Indian plan a big surprise – build a barbecue and throw a party for their friend. Good intentions, they say, pave the road to Hell and Cowboy and Indian have the best. They go online to order the 50 bricks they need but accidentally hold down the “zero” key, ordering, instead, 50 million million! Horse begins to wonder as delivery truck after delivery truck come by to drop off their loads of bricks. Soon the pile begins to take on epic proportions and disaster strikes the town called Panic. The writing team of Aubier, Patar, Guillaume Malandrin and Vincent Tavier take their simple story and inject it with humor, intrigue, adventure and just plain old dumb, fun comedy. Horse is the only one with, uh, horse sense in the household, while Cowboy and Indian deal out the hijinx and get the laughs. The stop motion animation is crude, at best, but that is part of the charm of “A Town Called Panic. When I first saw the extraordinarily amateur stop motion photography and children’s toy props, I thought that I was in for some cheese and maybe a bit of mild comedy. I was wrong. This little diamond in the rough shows how filmmakers can overcome miniscule budgets and lack of resources with the use of imagination and talent. When the 77-minutes of great good fun were over, I had me a roaring good time.