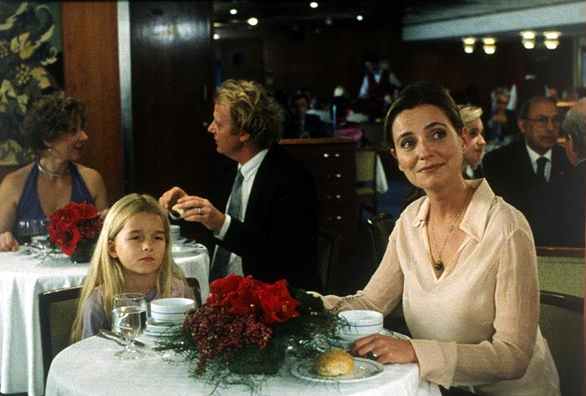 A history professor from the University of Lisbon (Leonor Silveira, "I'm Going Home") takes her young daughter (Filipa de Almeida) on a cruise to meet up with her airline pilot husband in India. Along the way, Rosa Maria visits the spots she lectures about and describes myths and legends to little Maria Joana. On board the ship, Captain John Walesa (John Malkovich, "I'm Going Home") gathers the famous women who have boarded in Marseilles (Catherine Deneuve, "I'm Going Home"), Naples (Stefania Sandrelli, "The Last Kiss"), and Athens (Irene Papas, "Captain Corelli's Mandolin") at his dinner table for civilized conversation in four languages in 96 year old writer/director Manoel de Oliveira's ("I'm Going Home") "A Talking Picture."

De Oliveira the writer introduces intriguing concepts sure to provoke post-screening discussion, but unfortunately de Oliveira the director, besides offering a terrific travelogue, produces stilted, stodgy cinema. "A Talking Picture" is an oddity. As they sail out of Lisbon, Rosa Maria tells her daughter the stories of the monuments they pass to Henry V and King Sebastian. At their first stop in Marseilles, they worry about a small dog tied to a boat which is pulling the poor animal too close to the edge of its mooring. 'Untie his lead!' says a fish seller (Michel Lubrano di Sbaraglione) who then instructs them to read what's on the ground. After another dose of history, it's back on board, followed by Delfina (Deneuve), a famous actress. It is not until they reach Athens and Rosa approaches an orthodox priest (Nikos Hatzopoulos) at the Parthenon that we learn she is a history teacher. Rosa and Father Nikolas discuss the difference their religions as he shows them around. In Istanbul's Cathedral of Córdoba Joana asks if the Muslims and Catholics are still at war. "No, that was the Middle Ages," replies her mom. In Cairo, an actor (Luís Miguel Cintra, "The Convent") befriends the girls and takes them for a drink at the hotel built for the inauguration of the Suez Canal. The three modern goddesses of Delfina, international model Francesca (Sandrelli) and singing star Helena (Pappas) are introduced when the admiring glance of Joana from another table transfers the action to the Captain's table during dinner. Speaking French, Italian, Greek and English (Malkovich also speaks his adopted French with frequent Oliveira costar Deneuve), they discuss the state of civilization. After disembarking from Cairo, Captain John convinces the Portuguese ladies to join his table and presents Joana with a Muslim doll. The symbolic ending will come as a shock to some and no surprise to many. De Oliveira titled his film correctly and perhaps should have considered publishing a book instead of creating this weird little film. Each and every port of call is represented by the same awkwardly edited (Valérie Loiseleux, "An Amazing Couple," "I'm Going Home") sequence. The prow of a ship is seen slicing through waves in close up (and the same footage is used over and over, even doing double duty as day for night). Suddenly Rosa and Joana are at another recognizable location. A shot of a gangplank announces departure and the embarkation of the next national representative. Onboard ship is represented by a set bound side view of the ship's deck and rail or the dining room. De Oliveira and his production designer Zé Branco ("Strayed") never convincingly portray an ocean voyage and the director and his cinematographer Emmanuel Machuel never move the camera - actors walk into and out of static shots. The actors are reserved, even delivering their history lessons or engaged in the overly polite conversation one engages in at cocktail parties. Yet, even though de Oliveira's direction is sadly outdated, "A Talking Picture" engages with his topical observations. This film exists in a time capsule of its own making.

95-year old director Manoel de Oliveira combines travelogue with history lessons as a young Portuguese mother, Rosa Maria (Leonor Silveira), and daughter, Maria Joana (Filipa de Almeida), travel pleasantly on a cruise ship headed for Bombay, India. As the ship sails past one historical location after another, Rosa tells Maria the saga of each locale. Meanwhile, ship’s captain John Walesa (John Malkovich) entertains three famous actresses (Catherine Deneuve, Irene Pappas and Stephanie Sandrelli) as they talk of language, politics and philosophy, each in his/her own tongue. This is truly “A Talking Picture.” The spoken word (as one might guess from the title), rather than physical action, is the focus of “A Talking Picture.” As the cruise ship cuts through the warm waters of the Mediterranean Sea, Rosa tells her young daughter the history of each port they pass through. Pompeii in Italy, Athens in Greece, Istanbul (not Constantinople) in Turkey and Cairo, Egypt each provide the opportunity for a history lesson by the academia mother to her daughter. While the ship plies its way to its final destination – we know this from the many close-up cutaways to the prow of the boat slicing through the waves – the captain entertains his friends around the dinner table. It is a reverse Tower of Babel as each converse in his/her own language – French, Italian, Greek and English - but understanding the others perfectly. When John invites Rosa and Maria to join them, none at the table, except for the captain, speaks Portuguese. They all revert to the language common among them, English, and continue their discussions about politics, people and society. The static camera lends a stolid, stodgy quality to “A Talking Picture” as the focus is on discussion and dialogue and not on the players. With the lens backed away from the actors there is little intimacy to draw the viewer into the proceeds. The aptly titled film is interesting on an intellectual level but is too stilted visually to fully keep the viewers attention peeked. Veteran helmer Oliveira puts sometimes profound words into the mouths of the actors but the utter lack of action – even the film’s explosive finale is kept off screen – keeps the film at arm’s length and doesn’t allow one to embrace it. There is a lot of philosophical banter about language and world order but it is more academic than entertaining. Each of the talented actors – icons in their thespian worlds – is attractive and articulate. The director elicits the words from each but there is little emotion in their speeches. Irene Papas sings a haunting, melancholy song toward the end that breaks up the constant yakking. John Malkovich gives presence to the only important male figure in the film. There is a nice mother-daughter relationship between Rosa and Maria that rings true but mostly the characters are going through the motions. If you appreciate didactic dialogue and long intellectual discourse, then you may like “A Talking Picture.” The lack of action, or even movement (and I grew tired of watching the damn ship’s prow slicing through the waves over and over, again), will be a turn off to most. There is little beyond the intellectuality to grab the average movie-goer.